While barbecue is my all-time favorite, fried food comes in at a very close second. It was time once again for the State Fair of Texas, and this weekend I eagerly made my way down to Fair Park to experience all of the deep fried goodness the fair has to offer. 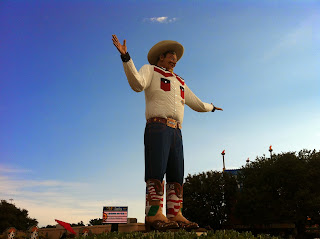 This is Texas, so of course the fair has a wide selection of the standard barbecue sandwiches and platters. I can get barbecue like that any day of the week, but today I was on the hunt for something less run-of-the-mill.

My first stop was at Little Bob's Bar-B-Q, unfortunately located in the densely-populated Midway. Little Bob's offered most of the usual barbecue selections, but they also had a Bar-B-Q Bologna Sandwich on the menu that seemed worth a try. I know barbecue bologna isn't too far out of the box, but it isn't something that I come across too often either. 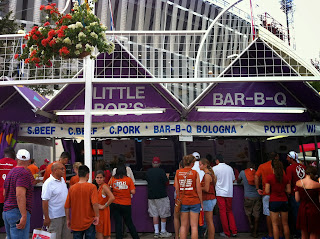 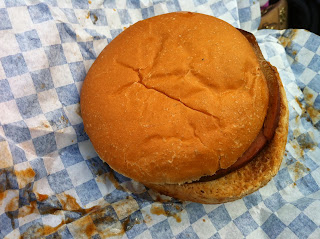 The sandwich was pretty simplistic: a half-inch thick slice of smoked bologna on a hamburger bun, topped with barbecue sauce. The thick-cut bologna had a lot more substance to it than the deli-cut bologna I'm used to. I caught a little bit of smoke, though not as much as I'd hoped for. The sauce had a pleasant taste, and was just enough to add some flavor without overdoing things. I would have liked a homemade bun instead of the grocery store variety I received, but that's a lot to ask for at the State Fair. All in all, this was a good first pick.

One of my favorite fair foods from the past two years were the fried ribs, and I couldn't wait to try them again. Fortunately for me, it seems that this recent innovation is here to stay. I braved the lines at the Midway's La-Kam's Bar & Grill for an order of Cajun Fried Ribs. 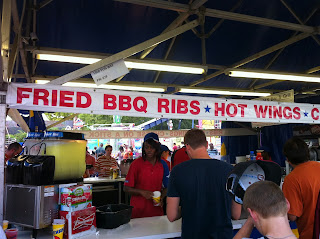 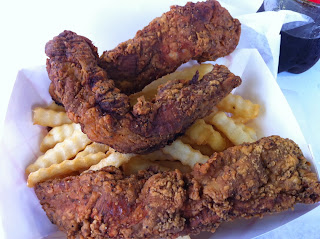 Although my memory could be a little fuzzy, I seem to think the fried ribs I'd eaten in years prior were baby back ribs. This time around I received chicken fried spare ribs, but I certainly wasn't about to complain. The chicken fry batter had a good amount of pepper and seasoning to it. It was hard to pinpoint any smoke with all of the flavor from the batter, but I'll let that one slide. Despite the frying process, the meat was still very moist and tender. The one downfall was the decision to include frozen cafeteria french fries, which could have been left off and replaced with an additional rib as far as I'm concerned.

After two entree selections, it was time to break things up with something sweet. No State Fair outing is complete without funnel cake, so we headed over to the aptly-named Funnel Cakes in the Midway to try their Apple Cinnamon variety. 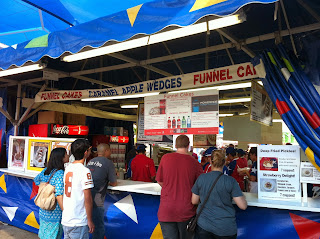 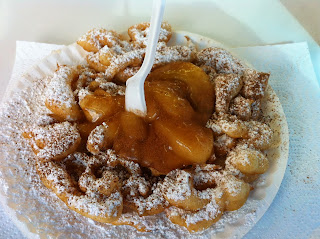 The gooey apple topping seemed like nothing more than standard apple pie filling, but it was still tasty. The large apple slices were a little hard to eat, so perhaps diced apples would be a better choice. All of the cinnamon and powdered sugar piled on top fit perfectly with the flaky funnel cake dough. It would have been nice if they'd provided me with a plastic knife to dice up the massive dessert, but my hands worked just fine too.

With my sweet tooth thoroughly satisfied, I was on the hunt for more unique barbecue, but that hunt came to a screeching halt when I came across the Eat Crispies stand and their Fried Chicken Skin. That's right, chicken skin. No meat, no bones, just skin. Where have you been all my life? 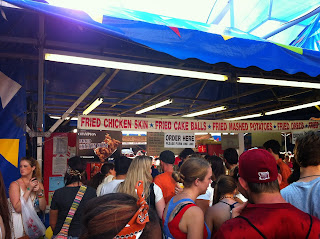 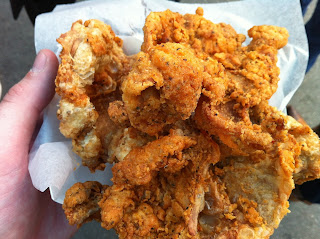 I just wanted to sample the Fried Chicken Skin, but a single order comes with a massive amount of artery-clogging deliciousness. It should have come in a bucket with some antacids and a gym membership. The chicken skin was everything I hoped it would be. It actually reminded me of pork rinds, just with a lot more batter. The pepper-laden batter added a good flavor to the already tasty skin. It was very crunchy, so I had a continuous cascade of batter crumbs falling down onto my shoes the entire time. This was far too much skin for one person to consume, so I donated half of my order to a random bystander.

We needed a break from the heat, so we wandered inside the Tower Building to check out the food booths there. BW's Famous Fried Ribs had two things that sounded too good to resist: BBQ Brisket Egg Rolls and Fried Banana Pudding. 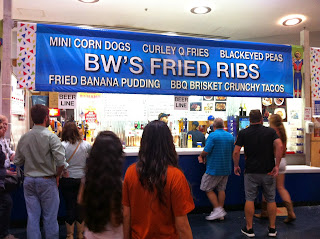 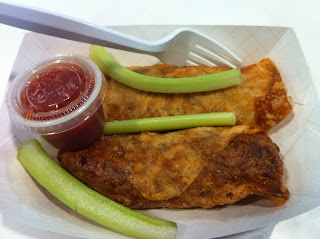 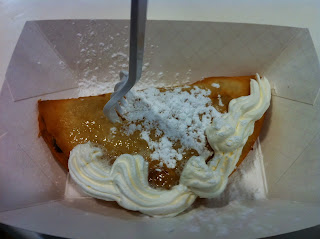 My twin egg rolls were loaded with chopped brisket. The wonton wrapper that housed my brisket was nice and flaky. There wasn't much smoke to be had, but at least the meat was good and tender. The egg rolls come pre-loaded with a light slathering of sauce, which added a nice sweetness to the meat. You are also "treated" to a cup of some kind of barbecue sweet and sour sauce. The sweet and sour was just awful and left a bad taste in my mouth.

Banana pudding is one of my absolute favorite desserts, possibly due to my rural Southern upbringing. The addition of fried dough elevated the pudding to a restaurant-quality palate cleanser. The warmed banana pudding made this much more like a pie than a standard pudding. It almost seemed like a banana pudding crepe. The whipped cream and powdered sugar on top was just what this dessert needed. I wish there had been a scoop or two of vanilla Blue Bell ice cream to round things out.

As would be expected at any large-scale festival, the food at the State Fair had its highs and its lows. That being said, my biggest disappointment was with the public transportation to and from the fairgrounds and the absolutely despicable planning and management thereof. The entire experience was too infuriating for me to get into all of the details (it would take another 5 or 6 paragraphs), but suffice to say that it was enough for me to ditch my pre-paid train pass in favor of a $25.00 taxi ride home. If you have enough Xanax to deal with the crowds and the hassle, the State Fair of Texas is a culinary experience that's hard to pass up.