I had tried to visit Capitol Smokehouse & Grill during my previous barbecue outing, only to find them closed due to lack of heat. Winters in Little Rock due tend to be a bit on the chilly side, so I didn't mind postponing my visit until today. 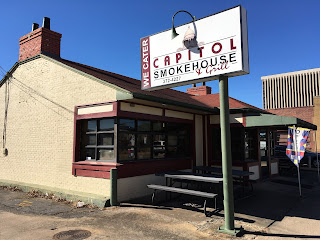 This place could seriously use a complete design makeover, or a fresh coat of paint at the very least. And that's coming from a guy who regularly eats at dives and shacks. Capitol Smokehouse has all of the knickknacks of a small, rural diner shoved into a relatively tiny space downtown. Well, downtown-ish anyway. 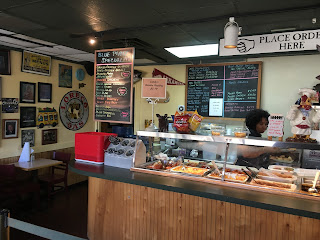 Here everything comes cafeteria-style, which means that all of the meats are pulled from warming trays rather than being cut fresh to order. I initially ordered their combo plate, slated to come with brisket, pulled pork, and baby back ribs by default, along with potatoes and "meaty beans" as my sides. Except today they didn't have any brisket, and for some reason they wouldn't let me substitute their barbecue chicken for the beef. So after much deliberation, they suggested that I take a two-meat "half and half" plate of pulled pork and ribs and add on the poultry for a $3.99 upcharge. All together, my lunch was almost $20.00, which seemed a bit steep. 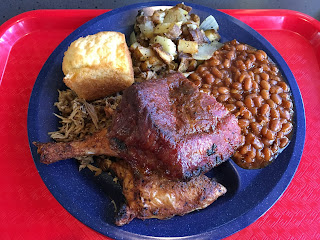 The beans were both sweet and spicy, and nicely seasoned to boot. I didn't notice much meat in there, but at least they were tasty. My skin-on potatoes were crispy and loaded up with big hunks of onion. Although I tend to prefer my potatoes in salad form, these were a worthy and comforting side dish. The cornbread, however, was dry and crumbling at every touch.

My local Kroger generally sells chicken quarters for around $1.99 per pound, so for more than double that price I was expecting to be blown away. The skin was crispy and seasoned well, and the dark meat was juicy enough. There wasn't any discernible smokiness, but there was at least a good char from the pit. Something slightly sugary in the rub was also a welcome flavor contrast.

While most of the food at Capitol Smokehouse came from visible warming trays, my pulled pork came from a plastic baggie. It was sort of dry, though astonishingly tender. There was just a touch of smoke, and otherwise it was fairly bland. I didn't find any real bark to speak of, at least not in my portion.

I couldn't see where they pulled my ribs from, but it sure wasn't the pit. Their soggy crust suggested that they too had been "warming" for quite some time. The crust did showcase a surprisingly savory blend of spices, but there was only a hint of smoke, and it faded quickly. At least the meat was cooked well, it just needed to be served a lot fresher.

The ladies running Capitol Smokehouse & Grill were some of the friendliest you're likely to find anywhere, but sadly that only does so much to make up for mediocrity, especially considering the price tag. Even though I really wanted to give this place a higher rating, they don't deserve it.

My first choice for lunchtime barbecue was unexpectedly closed today. Apparently their heat went out, and since it was all of 19 degrees overnight, they felt like this might be problematic. Good call. I made a snap decision to check out Hawgz Blues Cafe in North Little Rock instead. 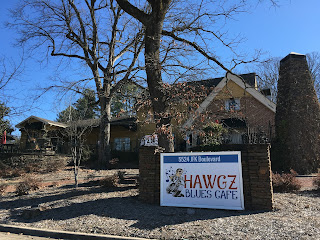 Best I can tell, this joint opened sometime in Spring 2017 or so. There was a surprisingly limited interior dining space, which is odd given the enormity of the building itself. A large group of customers had most of the tables gobbled up when we arrived, so maybe there's really more seating than it seemed. High ceilings and large open spaces made the room feel even more empty. It has kind of an old Nola house feel to it, and I assume that's what they were going for. Food aside, this is surely a great spot for live music and evening cocktails. Their big outdoor patio looked like it gets rocking quite often, at least in warmer weather. The bar area I saw probably has plenty of traffic as well. 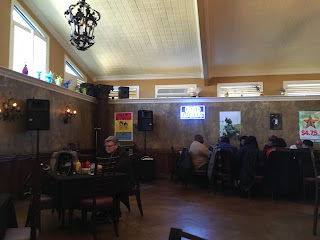 Hawgz Blues offers a Southern Smoked Dinner with either brisket or pulled pork, but I was bold enough to request both. This combo automatically comes with baked beans and potato salad. Good enough for me. For the little guy that I had in tow, I ordered the kid's chicken tenders with mac and cheese instead of the standard french fries. All requests were happily accommodated. 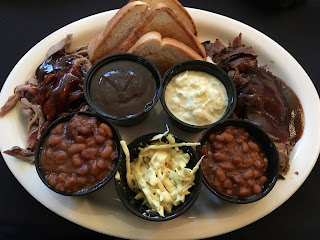 I ended up with a side of unexpected coleslaw, too. There were nice hits of mustard and crunchy cabbage in each bite. I'm no fan of slaw in general, but this was almost enough to change my mind. The beans were pleasantly seasoned and had some sizeable hunks of meat throughout. Although their potato salad wasn't quite mashed, it was close. The creamy mayo base had plenty of veggies mixed in for texture. Each side had merit, and I was happy to have them all.

The brisket was sliced thin but still had evidence of bark and a rosy smoke ring, though the thin slicing didn't offer too much of either. The thinness did help keep things tender at least. A moderate smokiness was the most I could find. Their sauce added both acidity and a sweetness, but wasn't overpowering at all. It was actually a nice combination of natural and added flavors.

My pulled pork was even better. Big chunks of tender pork were a welcome change of pace from the stuff that's chopped into oblivion. I found it much smokier than the brisket, but I wished for more bark. Hawgz Blues uses a different sauce on the pork, and it had some definite heat to it. The spiciness lingered on my lips and tongue, as did the smoke.

Although chicken tenders and macaroni aren't exactly a gourmet meal, my son seemed to enjoy them both. That may not seem like a ringing endorsement, but he has a pretty discerning palate for a one-year-old. Take that as you will.

I like to read reviews from other customers both before and after trying out a new barbecue joint, mostly to see how my personal experience measures up. Yelp in particular has a fair amount of negative reviews for Hawgz Blues, criticizing both the food and the service. Honestly, I found neither one lacking all that much. I've already given my two cents on the food. As for service, every employee I saw was hustling hard, and two others besides my waiter checked to make sure that everything was ok at various points during the meal. I appreciate that kind of work ethic. Perhaps there were just some growing pains early on, but whatever the case may be, Hawgz Blues Cafe seems to have things under control now.