Another food truck review? Yup! Smokin' Buttz has been on my agenda for a while. I randomly checked their calendar while researching lunch options today, and lo and behold they were scheduled for an 11:00am service just a short hop away. Exactly where I found Roscoe's last week, as it happens. Some might call that a coincidence, but I took it as a sign from the universe that this was meant to be. 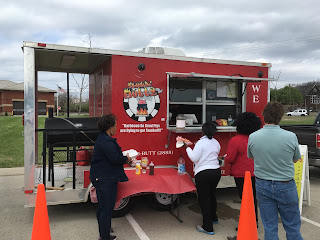 Food trailers seem to be a popular option for Nashville's mobile barbecue eateries, maybe because of the space it leaves for a pit or smoker out back. These guys were pretty no-nonsense when it came to taking and preparing my order, but they were also polite and cordial throughout the process. I don't think it took five minutes in between parking my truck and hopping back inside it with food in hand. Excellent.

Of their few sandwich options, the Gut Buster was impossible to resist: pulled pork (or pulled chicken if you prefer), barbecue sauce, nacho cheese, and jalapeños. Sides are extra, and I tacked on some of their mesquite coleslaw. I didn't really need a second sandwich, but since pulled chicken is their only other meat offering, I felt somewhat obliged to give the Mesquite sandwich a whirl, too. This one I took with BBQ baked beans. Good thing I don't go back to see my doctor until September, plenty of time to burn things off. 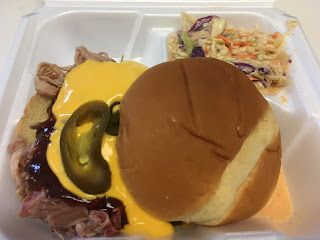 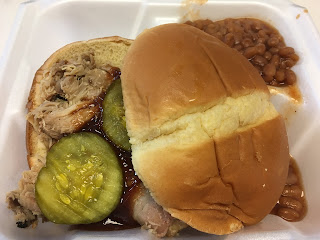 The mesquite coleslaw was fresh and crunchy, with a refreshing combination of sweet and spicy flavors. If all coleslaw was like this, I'd probably eat it more often. They describe their beans as "sweet hickory BBQ baked beans with a hint of southern comfort." I found them as sweet as advertised, but also peppery and savory at the same time. Perhaps that was the aforementioned southern comfort.

My Gut Buster looked like quite the monstrosity, and certainly much different than the usual barbecue sammiches I eat. This bad boy was loaded with rosy smoke-kissed pork, which had only a mild smoke level. Even though the sliced jalapeños definitely packed a wallop, a healthy dose of nacho cheese helped to temper the heat a bit. Their sweet barbecue sauce didn't add much on its own, but coupled with the cheese it was actually really tasty.

Unnecessary as it was, I enjoyed the Mesquite sandwich. It came piled high with tender, juicy pulled chicken. A lot of barbecue chicken comes out sort of dry, so this was a welcome surprise. Having a good mix of white and dark meat probably helped in this regard. It actually struck me as a little smokier than the pork, though not by much. Pickles added both a pleasant acidity and a crunchy texture to the mix. The barbecue sauce was fine, but oddly I found myself longing for more nacho cheese.

I was really impressed with Smokin' Buttz. Many of the long-standing joints I've visited don't match the quality of barbecue coming out of this tiny trailer. It's worth mentioning that, based on the lingering headache that I acquired afterward, either the nacho cheese or the barbecue sauce likely contains some MSG (monosodium glutamate). That's not really a criticism of their food, but rather a heads-up for those customers who are negatively affected by this additive/preservative like I often am. Headache or not, it was worth it.

I seem to be on a bit of a food truck kick lately, partially because I've already investigated most of the brick-and-mortar barbecue joints near my office, but also because I have a general affinity for them. Roscoe's Smoked Bar-B-Que is a local food truck whose Internet presence is limited to a Facebook profile with about 450 likes, a Twitter feed with just over 100 followers, and an introductory page on the Nashville Food Truck Association website. In this day and age, that makes Roscoe's virtually unknown. So when I found out that they were going to be having a lunch run less than a mile from me, I did the only sensible thing and headed on over. 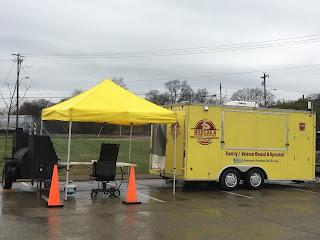 Technically Roscoe's is more of a food trailer than a food truck, but that's just semantics. These guys were supposed to be slinging out 'que at 11:00am, but I watched them prep until a quarter-after when they actually began service. Maybe the light rain was a factor, so I'll cut them some slack there. And if nothing else it gave me a few minutes to chat with Roscoe himself, who is an incredibly friendly guy and a Navy vet to boot.

Most barbecue food trucks don't offer traditional multi-meat combos (at least not in my experience), and Roscoe's was no exception. They do have a few options for one-meat/one-side plates, and I happily doubled up on those to create my own combo. I ordered a three-bone rib plate with potato salad, as well as a pulled pork sandwich with a side of their Cajun slaw. I'm not big on sauce, except as an optional add-on, so I took my sandwich with it on the side. 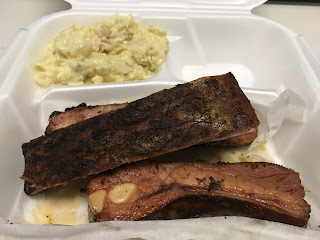 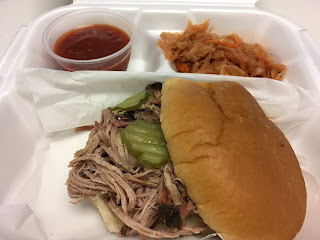 The sugary, mustard-heavy potato salad didn't taste exceptionally homemade, more like what I've seen coming out of large containers from Kroger. Regardless of its origins, I like mine more savory than sweet, with extra pickles for crunch. Roscoe's Cajun slaw had an interesting pink color reminiscent of pickled onions. The slaw was super spicy and loaded with vinegar, which definitely qualifies as Cajun in my book. That being said, it struck me as more of a sauerkraut than a coleslaw, but I digress. I enjoyed the flavors, even if it was more sour than my puckering lips cared for.

A cold Bunny Bread hamburger bun was sort of a sad vehicle for what otherwise appeared to be a great pulled pork sandwich. The pork itself was tender though lukewarm, which I doubt was because of the five-minute trip back to my desk to eat it. There was a mild smokiness to the meat. I found a little more smoke in the bark, but it didn't present much in the seasoning department. Essentially, the sandwich looked fantastic but only tasted about average.

In contrast, my big meaty spare ribs were cooked perfectly. None of that "falling off the bone" nonsense here. Each bite came away cleanly, as it should. The pink, juicy pork had just the right amount of smoke, and the spice blend on the crust was both noticeable and enjoyable. I also appreciated that the ribs weren't drowning in sauce, which is a rare commodity in Middle Tennessee.

Roscoe's Smoked Bar-B-Que started off sort of ho-hum, but came out swinging big time when it came to the ribs. There are definitely some areas where they could make improvements, and I would encourage them to add a little more flair and finesse to their choice of ingredients. I could be wrong about the store-bought nature of the potato salad, although I'd bet dollars to donuts that I'm correct. Bunny Bread is an understandably frugal choice for Roscoe's sandwiches, and even though I love their ridiculous spokes-rabbit and his perplexing catch phrase ("That's what I said!"), a homemade bun just elevates things so much more in terms of flavor and overall appeal. All that aside, Roscoe's provided me with a good lunch, and I'm happy that I gave them a shot.

Swett's Restaurant, which not-so-humbly describes itself as "a gathering place for Nashville's movers and shakers," has one of the least appetizing names imaginable. That said, this restaurant does feature several smokehouse selections, and that was enough to pique my interest. 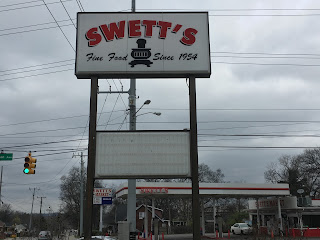 A cafeteria-style eatery, Swett's has been dishing out southern cooking for over sixty years. Things here are simple and practical, albeit a bit dated. With the exception of a few aesthetic upgrades, I imagine that the restaurant looks relatively the same as it did back in the 1950s, but that didn't seem to bother the line of people waiting to order or the tour bus that pulled up shortly after my arrival. In fact, many of the folks I saw there probably prefer it that way. As for any of Nashville's movers and shakers, the only person that came close to that description was a "gentleman" who easily weighed in at an earth-shaking 400 pounds. 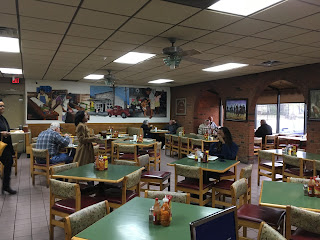 One of the first sights you see upon entering Swett's is their smokehouse room. It was empty and pitch black, with a sign directing patrons to grab their barbecue at the main cafeteria line. Part of me had been holding out hope that things would be cut-to-order here, but to no avail. I grabbed a tray and took my place in line, unsure of how long beforehand the smokehouse had finished cooking for the day. 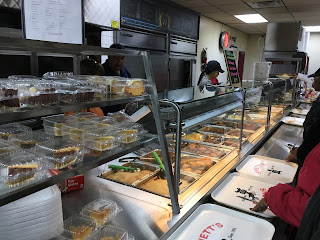 The rotating barbecue options at Swett's include brisket, chicken wings, beef ribs, smoked pork chops, barbecue chicken, and rib tips. Today's options were limited to pork shoulder and pork ribs, so I took a helping of each. Sides were certainly plentiful, many of which were better suited to the soul food entrees than the smoked ones, so I picked creamed corn and pinto beans as my accompaniments. 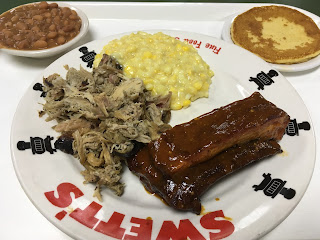 Swett's pinto beans didn't look like much, but I guess I should have heeded the age-old adage about books and covers. There was a surprising depth of flavor - a combination of saltiness and vinegary acidity, coupled with something else that I couldn't quite discern. The large glob of creamed corn was creamy and sweet, as one might expect. Not much popped taste-wise aside from the natural corn, but that was pleasant enough in its own right.

Before hitting my plate, the ribs had been swimming in a pan full of sauce for who knows how long. As a result of their sauce bath, the meat was falling off the bone at each gentle prod. Well, at least what meat there was to be had, since two of my three were more bone than meat. The pink meat appeared to have been smoked well, but all of the tomato-heavy, semi-spicy sauce prevented me from tasting any of it. Don't get me wrong, I liked the sauce just fine, but I'd rather have my ribs be something other than a vehicle for barbecue sauce. If that's all I wanted, I could have just subbed in bread for the ribs and saved myself some money.

Unlike its bone-in cousin, the pulled pork escaped the sauce, but only by specific request. I made the right call there, because the pork was tender and chock-full of potent smoke. Pieces of bark throughout added even more flavor, including a savory seasoning blend. If it had one flaw, it was just a touch too dry. But overall, a spectacular effort.

This is precisely why I always go for a multi-meat plate of food whenever possible. You never know which selections are going to be magnificent and which are going to be subpar. Had I ordered only pulled pork, or had I actually been able to taste the pork ribs themselves, this likely would have been a four-star meal. Ribs aside, the rest of my lunch was quite good, and I found myself reasonably impressed by Swett's Restaurant.