I've been trying to cut back on my barbecue outings for both financial and health reasons. Today, however, I decided to splurge and treat myself to some birthday barbecue for lunch. Smokies BBQ finally opened their doors a few weeks ago on the day before Thanksgiving. I was hoping to be there for the grand opening, but we were out of town visiting family. Better late than never. 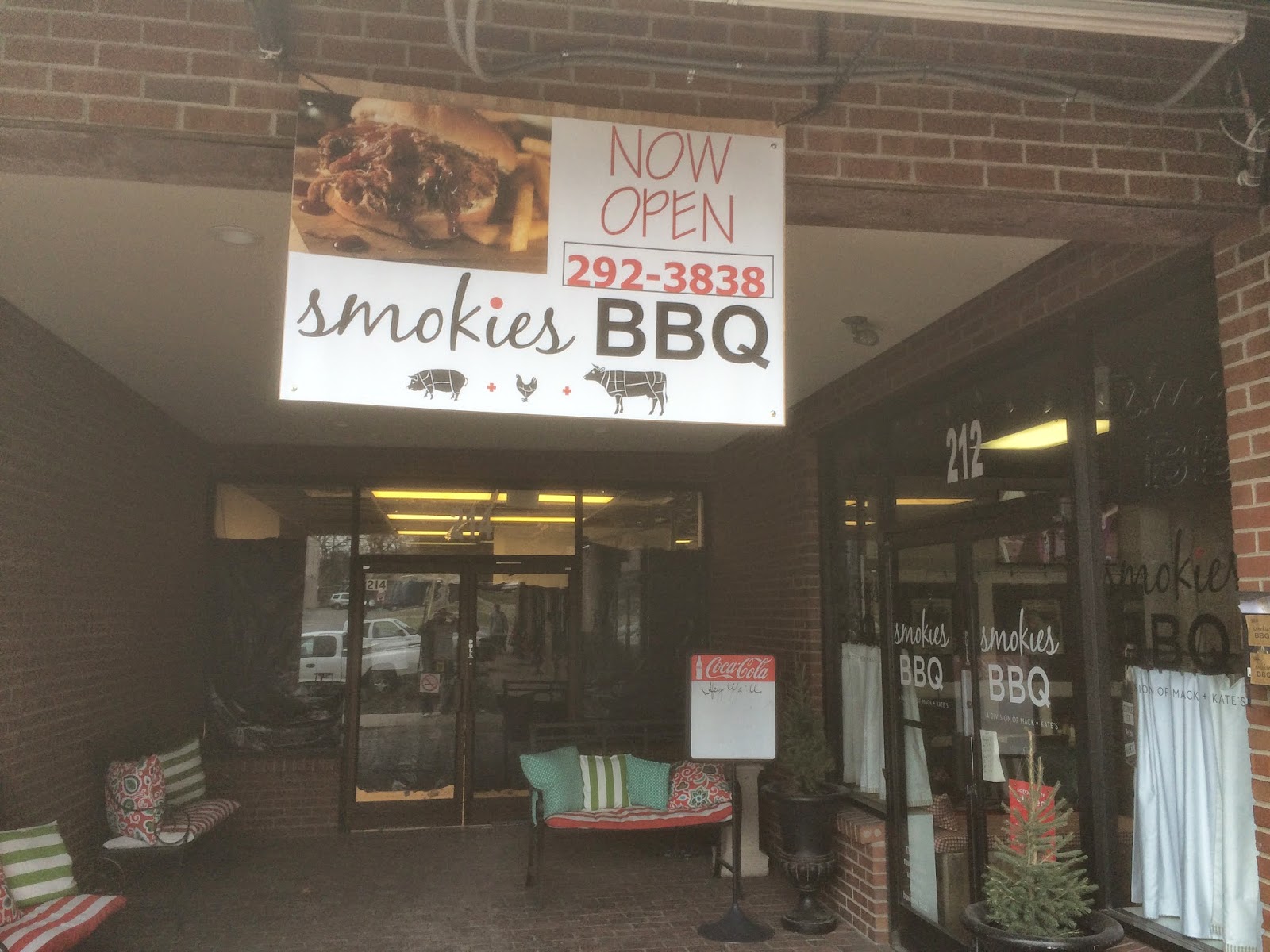 Smokies is an offshoot of Mack + Kate's restaurant down in Franklin, which generally gravitates toward more contemporary, upscale Southern fare. Their new barbecue operation is located in a run-down and easy-to-miss shopping center in south-Nashville. I arrived at 11:15am, and despite the advertised 11:00 opening time, the doors were still locked. I waited out in my truck and tried to be patient. By 11:20, Smokies was finally open for business.

The decor at Smokies was as trendy/rustic as you'd expect from Mack + Kate's. They also had their fair share of holiday decorations out and about. It felt more like a Southern bistro than a barbecue joint. I was fairly cold the entire time, especially when employees were coming in and out of the cooking area. Granted it was 45 degrees outside, but still. 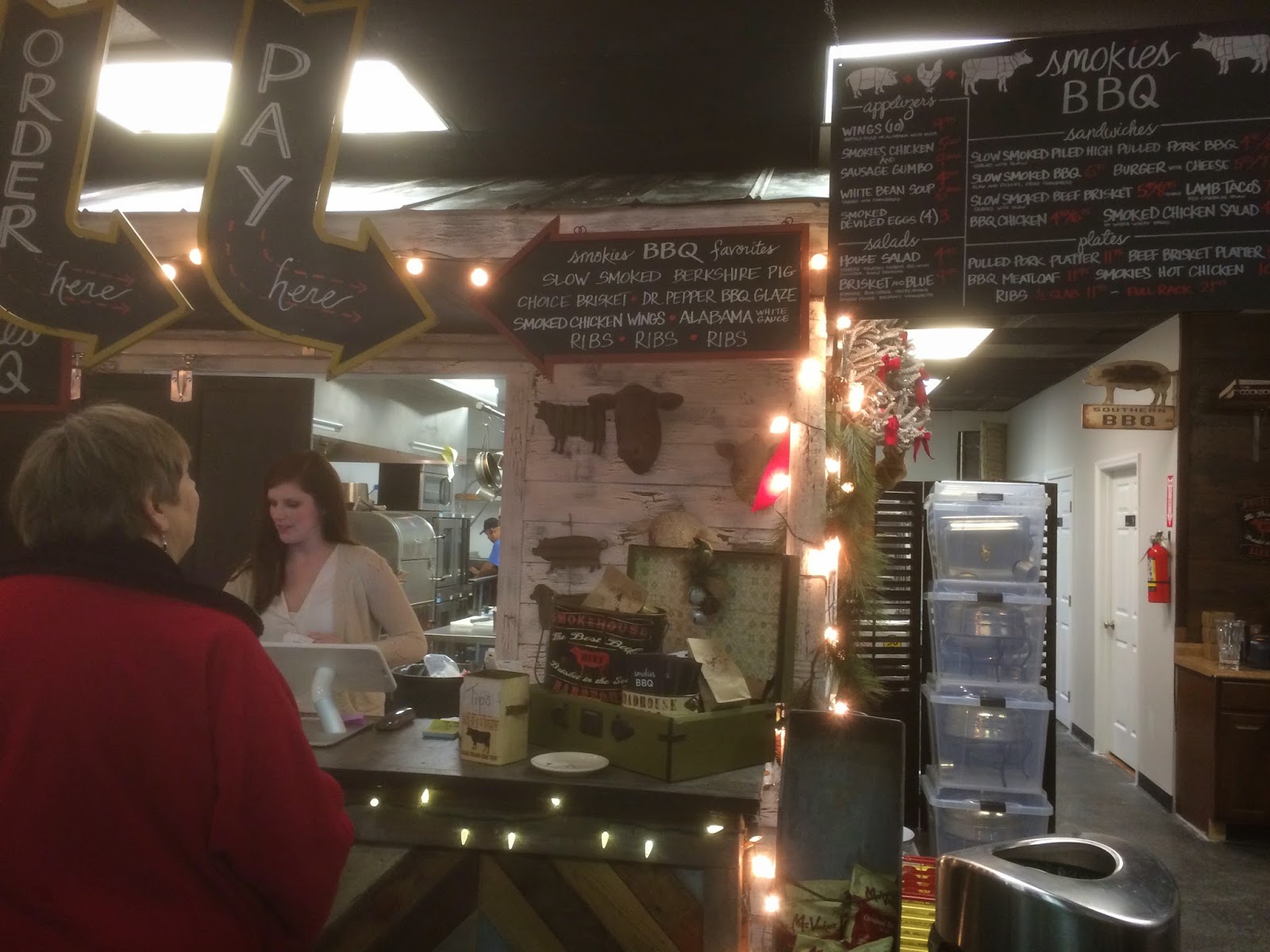 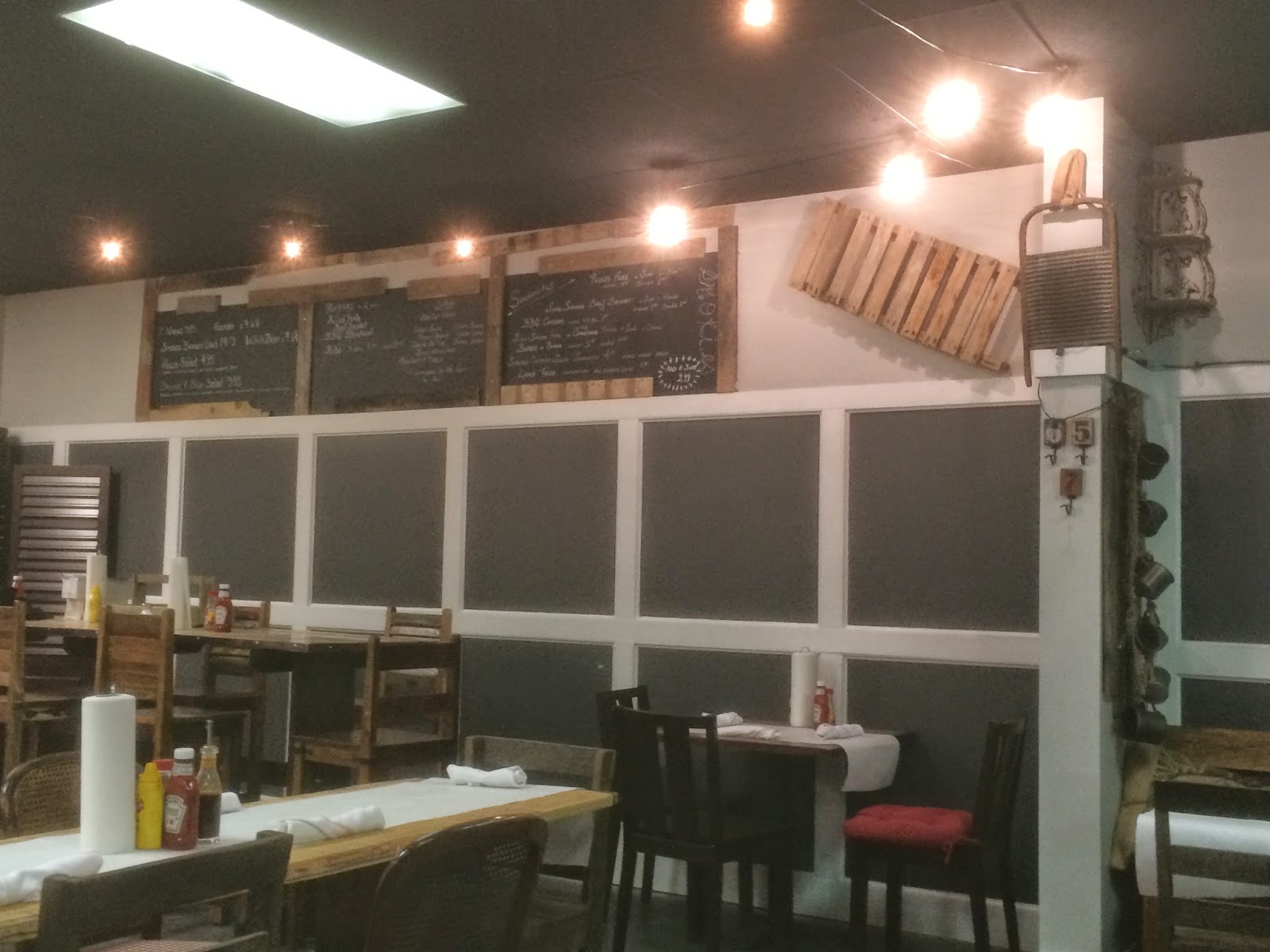 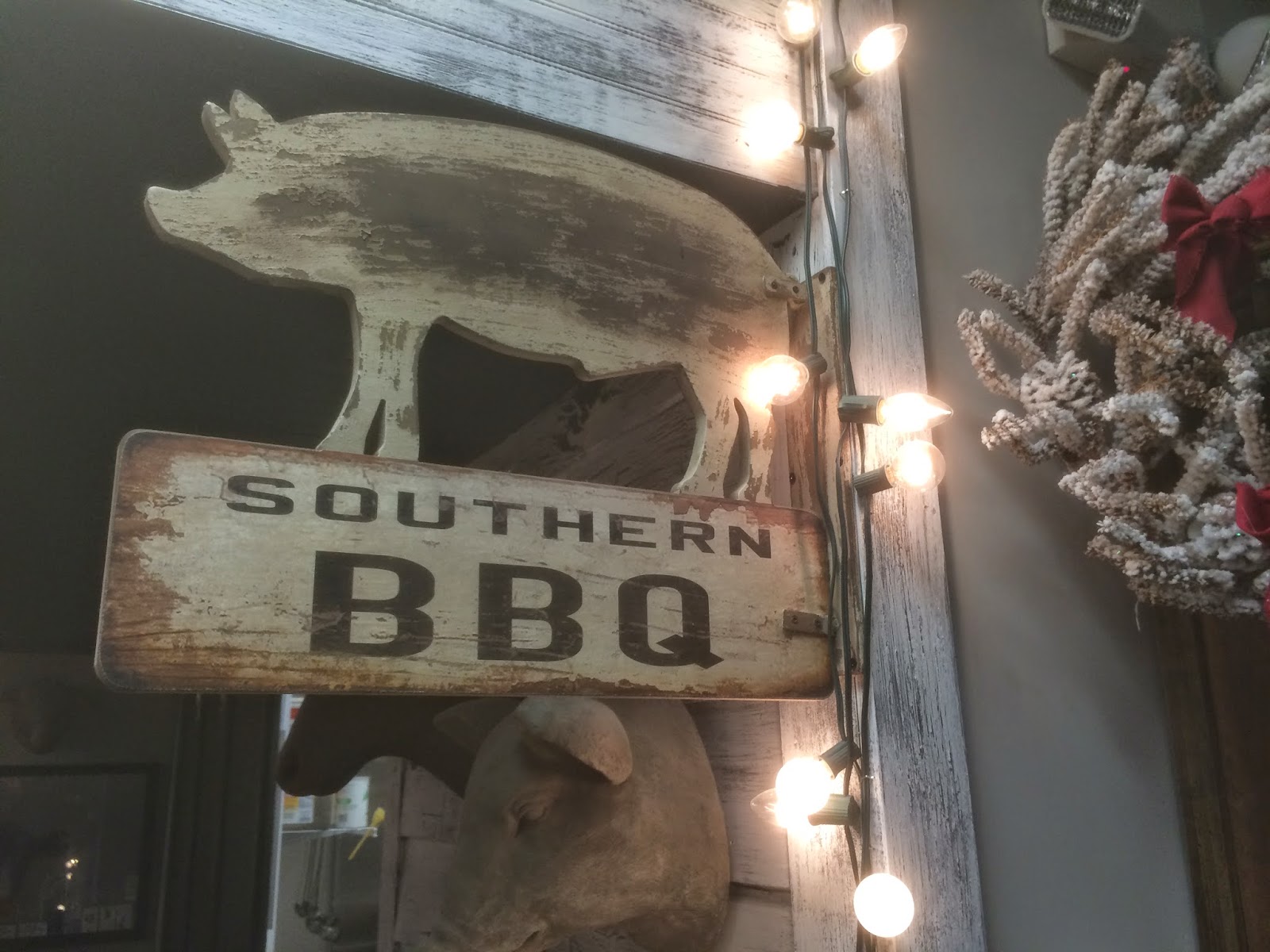 Since there weren't any combo plates on the menu, an appetizer seemed in order. I decided to try out their Smoked Deviled Eggs to start things off. For my entree, I ordered the Beef Brisket Platter. Although I wanted to sample several meats, in my experience, as goes the brisket so goes the rest of the barbecue. I asked for a fatty cut of brisket, which was met by a rather perplexed stare from the girl at the counter. She acquiesced, but still seemed confused by my request. Clearly she's not a barbecue aficionado. Their platters come with two sides, for which picked potato salad and macaroni and cheese. $14.00 sounded a bit steep for a one-meat plate, so I expected the food to blow me away. 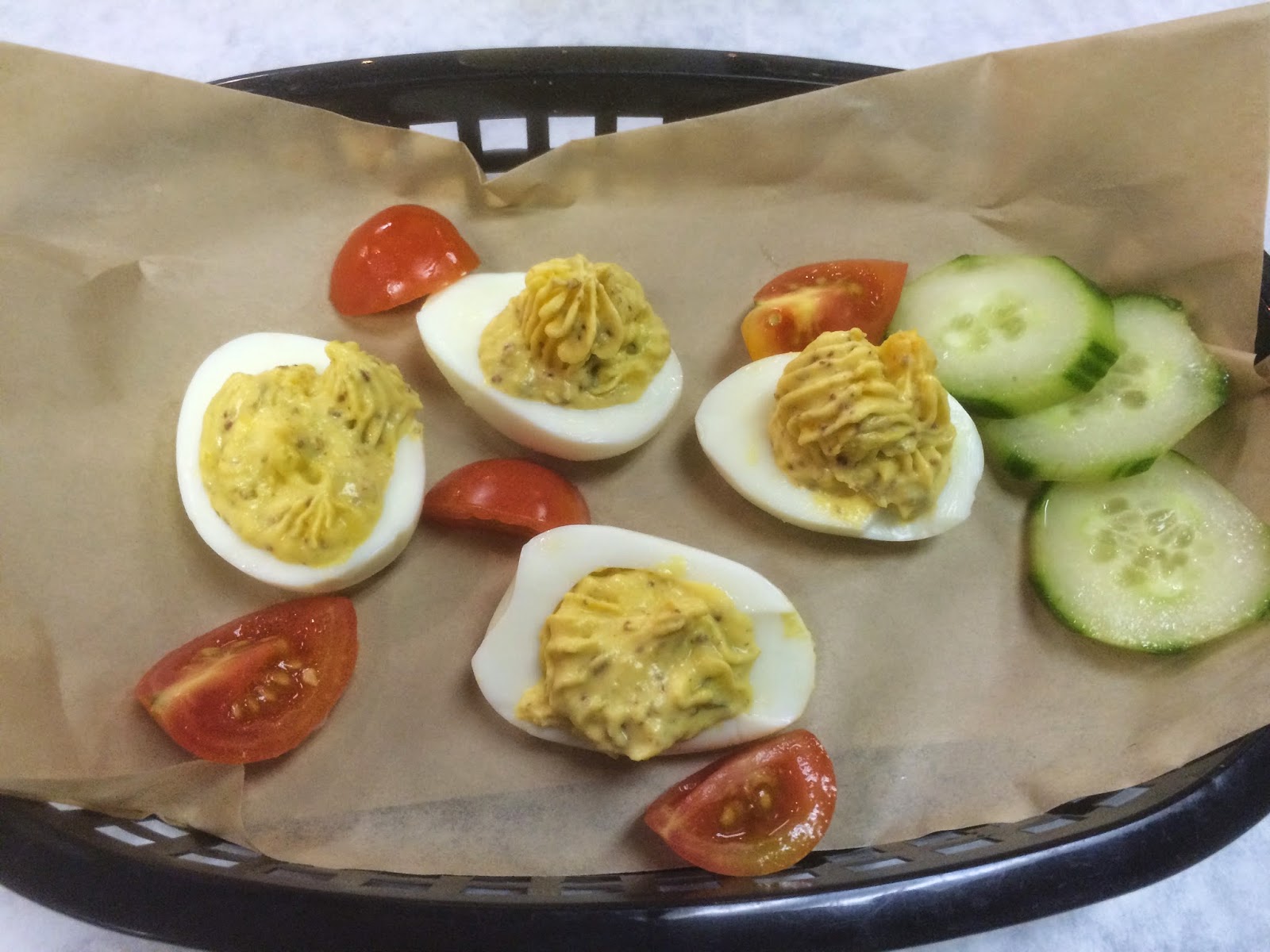 My smoked deviled eggs came plated with an unnecessary assortment of tomatoes and sliced cucumbers, which I felt no compulsion to eat. The eggs were good, but all I could taste was whole grain mustard. I was also disappointed by the complete lack of smoke. Some of the best deviled eggs I've had from barbecue joints come with a little smoked meat mixed in, which is what I was expecting here. I was glad to have them either way, since my main course was taking much longer than it should have. 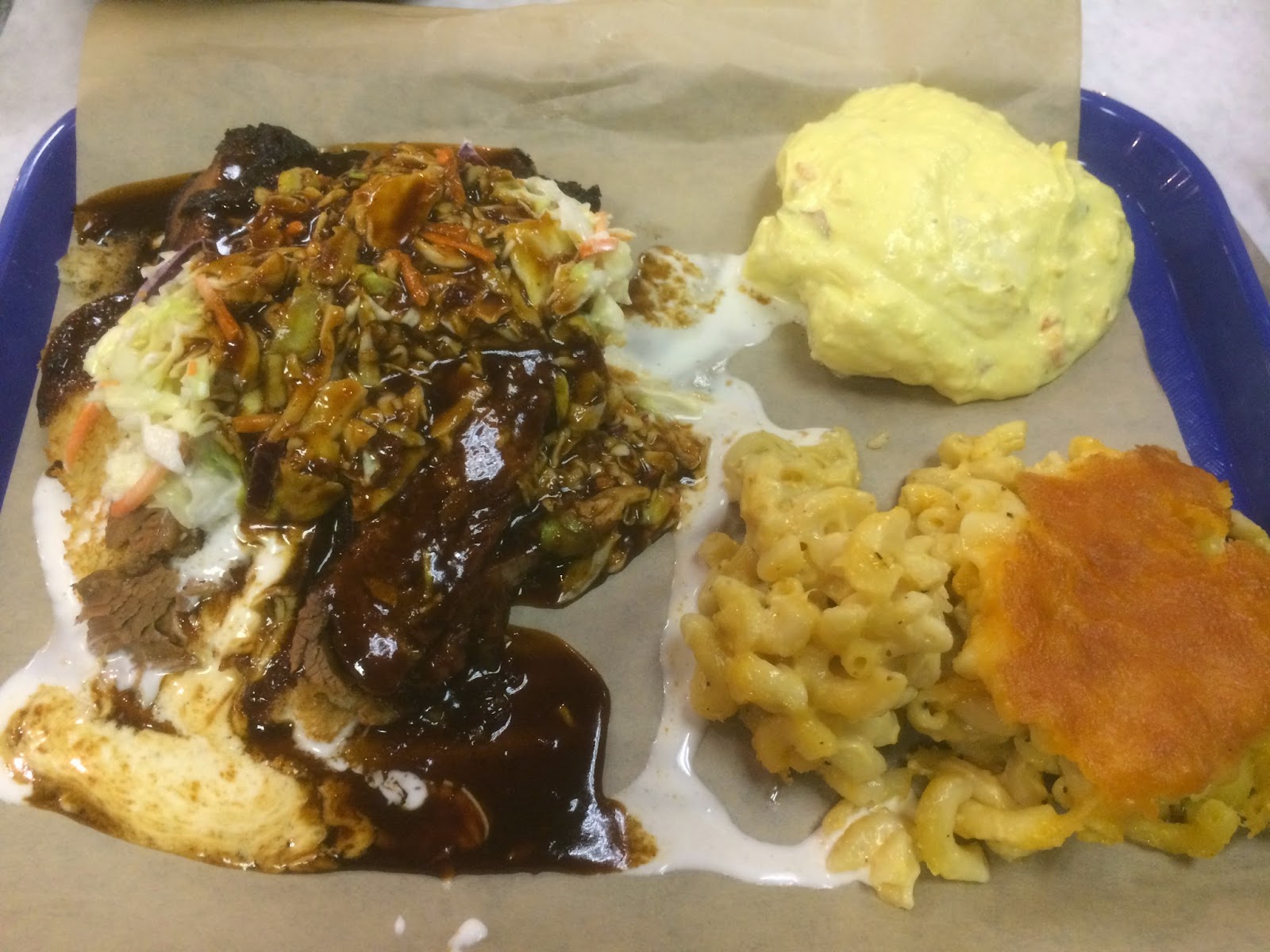 The big glob of potato salad didn't really look that appealing. As with the deviled eggs, the only flavor I found was an overpowering amount of mustard. There was only a minimal crunch to break up the creamy texture, so I moved on. The hard crust of cheese atop my macaroni meant it had obviously been baked in a pan. I could see some specks of black pepper, so I had higher hopes for this side dish. It was a little lukewarm for my liking. I also would have preferred more gooey cheese, but at least I could taste the pepper. There was absolutely no reason to serve either of these two sides on butcher paper, when a small plastic or styrofoam container would have sufficed. It gave me the impression that they were trying to imitate the serving style of a small-town meat market, though sadly playing a game that they didn't quite understand.

Honestly, I wasn't really sure what this brisket-themed monstrosity was on my platter. Best I could tell, it was a cornbread pancake, topped with sliced brisket, topped with coleslaw, topped with barbecue sauce. The cornbread itself was moist and pleasantly sweet, though the parts directly beneath the meat had turned to complete mush. I pulled apart the tower-o-food and managed to find a little bit of plain brisket to sample. It was a thick slice with good black bark, but it was a tad dry and had sort of a pot roast quality to it. The meat was also fairly lean, despite my initial request. The bark was tasty, but I found only minimal smoke, most of which was masked by the molasses-heavy barbecue sauce. And when I say "molasses-heavy," I mean that molasses was literally the only flavor I could taste. The coleslaw was nice and crunchy. However, I feel like the slaw should come without dressing (or at least with significantly less) if you're going to cover it with sauce anyway. Otherwise there's a weird mayo-molasses thing going on, which doesn't work any better with brisket than it does with coleslaw. If this is how they're going to serve their barbecue, then perhaps the menu description should say something other than just "beef brisket platter" so that patrons know what to expect.

Out of politeness, I tried to exit clandestinely so as not to draw attention to the fact that I left over half of my food uneaten. Despite my sneakiness, I somehow managed to knock over my chair in the process, causing the entire restaurant to stare. Figures.

I feel really bad giving Smokies BBQ such a negative review because I understand how much time, money, and effort it takes to open a new restaurant. That being said, I found nothing to justify a higher rating. It seems like this place is too focused on reinventing the wheel, when all you really need is four or five spices and some care and love at the smoker. I'm sure the food at Smokies BBQ would play well with the posh Williamson County crowd that likely frequents Mack + Kate's other establishment. Fans of traditional barbecue, on the other hand, are sure to be disappointed. I know I was.