I'm a big fan of food trucks for many reasons. These mobile eateries often offer some of the most unique menu items you'll find, and I admire their willingness to experiment with daily specials. Banjo's truck was scheduled for a lunch run out in Madison, Tennessee today, which isn't exactly close to my office distance-wise, but with interstate driving it really doesn't take any longer to get there than a trip to East Nashville. 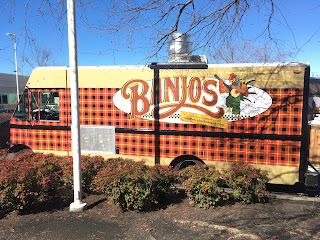 Chicken and waffles is always awesome, but Banjo's goes all-in with their Pulled Pork Waffle in addition to the usual poultry. Besides the obvious, this dish comes topped with blue cheese coleslaw and drizzled with your choice of sauce. I picked their cilantro-jalapeño ranch to jazz things up, especially since the traditional barbecue sauce option was a bottle of Sweet Baby Ray's. Well, it turns out the sauce doesn't come pre-drizzled anymore, but there were several bottles set out for customers to add as desired. This was already more than enough food for lunch, but I would have been remiss if I didn't also sample their Baby Back Ribs. The ribs are accompanied by blue cheese slaw as well, but I subbed in some ranchero beans instead. Although I had initially requested loaded potato salad as my side, that's now a "seasonal item" for some reason. None of these hiccups were deal-breakers by any means, but they did make the ordering process a little frustrating.

Banjo's three-man crew may not be enough, or at the very least the one they have isn't efficient. They started taking orders ten minutes later than scheduled. I was the fifth person in line, and it was thirty minutes later before I had my food in hand. Apparently it took some time for them to get the fryer hot, and since they've decided to start including French fries with their rib baskets, I got caught in the wake as well. The guy who handed me my order apologized and assured me that their food was worth the wait. Since I basically spent my entire lunch break plus fifteen minutes merely acquiring food, I hoped that he was right. 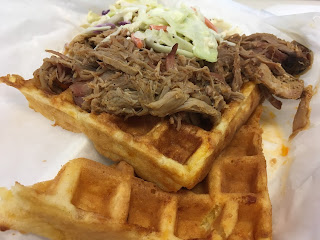 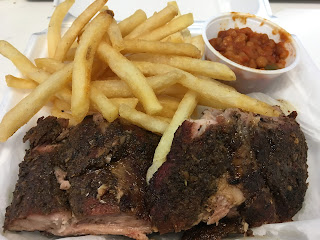 The blue cheese gave Banjo's coleslaw a really interesting bite, which I liked much more than the basic mayo variety. I found the pork tender and juicy, and it was adequately seasoned. There were hints of smoke in each forkful, as well as a matching rosy color from the smoke. That said, the pork was a little watery, like it had been hanging out in its own juices for too long. The waffle itself was a great vehicle for this dish. Mine was light and fluffy, and the lack of sweetness helped it pair nicely with the savory pork and pungent blue cheese. I thought that the addition of ranch dressing made for a great combination, and although the cilantro was definitely present, I didn't notice any jalapeño in it. Perhaps jalapeños are seasonal as well?

Standard frozen fries were nothing special and don't really warrant further mention. The ranchero beans were ok, but didn't particularly wow me. I was expecting ranch-style pinto beans by the name, so goopy baked beans were a bit of a disappointment. They also ran pretty heavy on the sauce. As for the ribs, I'll be honest, they didn't look all that great. There was a nice pink coloration on the pork, and the meat was certainly tender, but the crust (if you can even call it that) was fairly soggy. Even the heavy dose of dry rub had gotten mushy and caked on, partially because I think they're using too many powdered ingredients and not enough crystallized ones. The rub also tasted a lot like Old Bay seasoning, though spicier, and there was so much of it that I couldn't taste the advertised hickory/maple/cherry smoke. That may have been the biggest shame of all. Well, that and the fact that four ribs, fries, and a quarter-cup of baked beans cost me $12.00.

Obviously some degree of advanced cooking is required with food truck barbecue. I don't know how long beforehand Banjo's smokes their meat, but it's definitely too long. When barbecue sits around and just steams itself to death, the end result approaches pot roast territory.

My first attempt to explore G'z Bbq came in June 2016. I had thought it prudent to sneak in one last dose of barbecue before the hordes of tourists descended on Nashville for that year's CMA Fest. I arrived at G'z at 11:25am on a Wednesday, a time at which they should have already been open for twenty-five minutes per their advertised business hours. Instead, the lady working there informed me that they weren't open yet because they "still had to warm everything up; the meats aren't ready." Apparently this "warming up" process was slated to take another thirty to forty-five minutes, and it gave me no confidence whatsoever in the quality or freshness of their barbecue. With a limited amount of time for my lunch break, I cut my losses and picked up a Jimmy John's sandwich instead.

Fast forward to today, when I finally psyched myself up enough to make another run at G'z Bbq, partially (ok, mostly) because I discovered that my first choice for a barbecue lunch adventure had recently closed up shop. 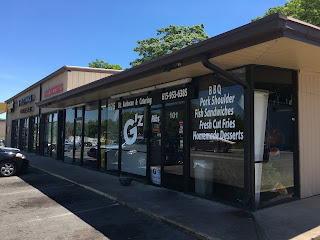 This time around was a completely different scene. The two guys getting everything set up were lively, friendly, and generally hilarious. We chatted for a bit about the finer points of smoked meatloaf, smoked catfish, and brisket chili. The place was empty thus far, and I hoped that it would make up in food what it lacked in ambiance. After all, who needs more than a simple table and chairs when you have outstanding barbecue? 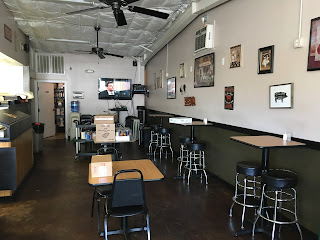 Once again I found myself in a comboless establishment. I'm glad that I double-checked though, because they offered me an off-menu sampler of ribs, brisket, and pork shoulder. This is about as close to the Texas Trinity as you're going to find in most parts of Tennessee, so I ran with it. I picked out sides of potato salad and smoked cabbage. I'm not really a big cabbage eater, but these guys said that it was their specialty. Sold.

The plating process took a lot longer than I expected, mostly because they had to warm up the meats for my order. Sigh. Luckily, they were using a flat-top grill rather than the microwave, but still. I did notice that the smoker out front was pretty much dead when I rolled up, so maybe they smoke everything overnight? Once boxed, my entire order got finished off with a heavy dusting of dry rub. 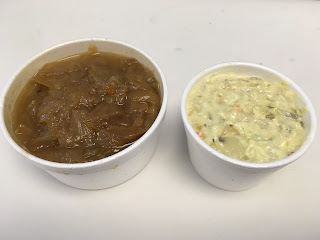 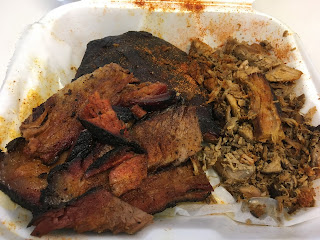 As advertised, the cabbage was phenomenal, and that's saying a lot coming from me. It retained just enough crunch to keep the overall texture in check, and mild smoky undertones came through in each bite. Their mustard-based potato salad was also tasty. I found it a little sweeter than most, with plenty of pickles and pimentos to go around.

Despite my concerns about the re-heating process, G'z brisket was truly exceptional. It couldn't have been more tender, and the well-rendered fat absolutely melted in my mouth. The deep black bark and beautiful red ring both screamed "Smoke!", as did the flavors. I also found a great seasoning on the bark, which the extra dusting of rub helped to bring to the forefront. This was one of the few briskets I've eaten in Tennessee which was worthy of the name.

The rough-chopped pork shoulder did not disappoint either. Well, not too much anyway. The meat was very tender with quite a bit of bark mixed in. That said, it was slightly dry, but still very good. I enjoyed the moderate smoke level as well as the spice blend. Even though it was a big harder to pinpoint the natural pork amidst all of the dry rub, the end result was savory and delicious.

My meaty spare ribs were encased in a dark, beckoning crust. I don't like my ribs falling off the bone, but these took a little more effort than I'd prefer. In fact, trying to cut apart my rack with a plastic fork and knife (admittedly not the best tools for the job) was exceedingly difficult. The smokiness was immediately apparent upon first bite and the pork was perfectly rosy, so I was willing to overlook some of the flaws.

The clear winner in this meat trio was the brisket, which is no easy feat for most non-Texans. I'd really love to taste G'z Bbq fresh off the pit, because I'm sure it's absolutely amazing.