I was making great time blowing through the backroads of East Texas, where it seems like the majority of barbecue joints are closed on Mondays for some odd reason, so I just kept going until I hit Naaman's BBQ in Texarkana. 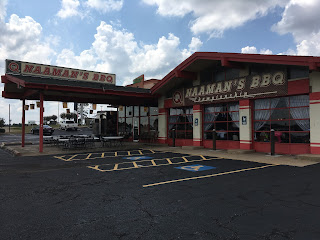 You'll find Naaman's in what was obviously an old filling station. They've worked hard to maintain that general vibe throughout, including tin walls, intentionally-peeled paint, and the trashcan housed inside a rusted-out car. All in all, the atmosphere was perfect for taking a nice lunch break from my long drive. 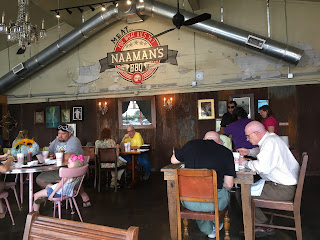 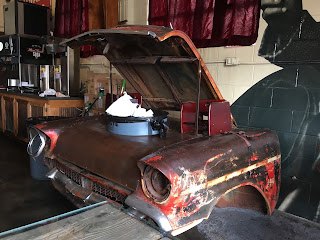 I was still in Texas by a matter of ten or fifteen yards, so I skipped the pulled pork and snagged one last Texas Trinity before crossing over into Arkansas. At Naaman's, you have to order a 3/4lb plate to get three meats, and I was happy to indulge. I took mine with brisket, pork ribs, and sausage, plus some potato salad and cheesy corn on the side. 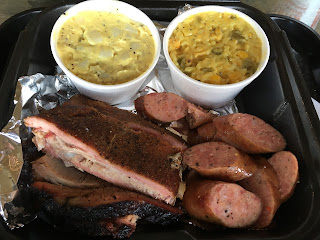 The potato salad was dominated by mustard, but something spicy caught my attention almost immediately as well. The heat faded pretty quickly, so I'm not sure what it was, but it was definitely interesting. The cheesy corn probably contained more rice than corn, although the diced peppers were a nice addition. It was loaded with cheese, that's for sure, and it made for a nice, comforting side dish.

Fatty brisket is the only way to go, and they were more than willing to accommodate my request. The fat-filled crust was burgundy, bordering on black, and it was ever so tasty. Each slice had a visible, rosy smoke ring which was matched by an excellent smoky flavor. The brisket was tender and very juicy, and it fell apart with ease. I wasn't about to try barbecue sauce with this magnificent beef, and it by no means needed any.

My pork ribs also had a deep red crust and a pink smoky hue beneath. There was a moderate, yet enjoyable, smoke flavor. The meat came off with minimal effort, bordering on falling-off-the-bone, but the crust wasn't quite as crisp as I had hoped for. That said, I did enjoy their simple rub, which tasted like salt, pepper, and very little else.

Naaman's makes their sausage in house, and it shows. There was plenty of black pepper to go around, as well as the coarse-ground meat that makes homemade sausage so spectacular. I found a great snappy casing and lots of juice in the links. The sausage was slightly spicy and seasoned well. Normally I don't go for barbecue sauce, especially not with sausage, but my waitress insisted that I try their sausage and mustard sauce together. I have to say, it was excellent. The sauce added some heat and vinegar, plus a mild sweetness on the back end.

My lunch at Naaman's was just the pitstop I needed to make it the rest of the way back home.

Back when I called DFW my primary barbecue hunting ground, there wasn't much of anything resembling barbecue in Dallas' Lakewood neighborhood. Certainly nothing worthwhile anyway. Lakewood Smokehouse opened up shop at the beginning of 2016, a smoke-filled oasis in a culinary desert. I was swinging through The Big D on my way south, and I couldn't resist a pit stop to check out Lakewood. 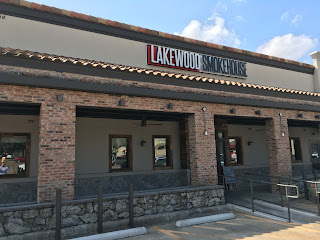 This place has reclaimed wood out the wazoo, paired with some contemporary furniture and industrial lighting. I dig it. There is also a nice bar area, with a Smokehouse Mary being the drink specialty. Think Bloody Mary with a pork rib in place of cocktail shrimp. I had another four hours on the road ahead of me, otherwise I might have indulged. Lakewood definitely smells like a smokehouse. They weren't busy at all at 11:30am on a Saturday, but I was sure that would change shortly. 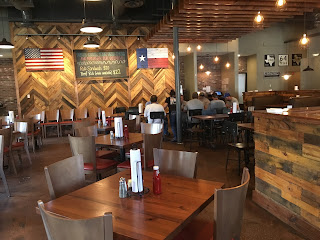 I ordered up a two-meat plate of sliced brisket and poblano cheddar sausage, taking ranch potato salad and their six-cheese mac and cheese as my side dishes. Lakewood had giant beef ribs on special today, and if you think I had sufficient willpower to resist snagging one of those as well, then you clearly don't know me well enough. My order ended up being sort of a beef-centric version of the Texas Trinity. 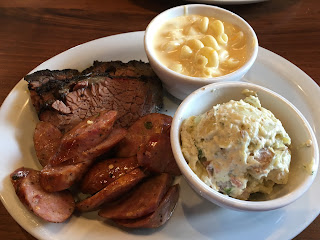 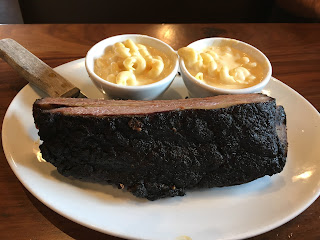 The macaroni, as advertised, was certainly packed full of gooey cheese. Large spiral noodles were a nice choice here, since they offered plenty of nooks and crannies for the cheese to hide out. It was definitely comfort food. Chunky, skin-on potatoes made for a great potato salad, and of course bacon makes everything even better. I loved the ranch dressing mixed in, which really jazzed things up.

My helping of brisket was spectacular. The crust was black as night, complete with a pleasantly salty rub and rosy red smoke ring beneath. All of the fat was completely rendered down, making the brisket melt-in-your-mouth tender. Each bite was also super smoky.

The sausage was nice and spicy, but not overly so, with just enough cheese to temper the heat. I found a great snap to the casings, as well as lots of black pepper scattered throughout. I was told that Lakewood makes their sausage in-house, and the coarse grind on the meat was a good indication of such.

I saved the best, or at least the biggest, for last. The massive beef rib was covered in a glorious fatty crust. There was more meat on the bone than I expected, and it was moist as could be, even considering the size of the thing. A moderate smoke level was just enough to be interesting without masking the natural beef flavors. Needless to say, this really hit the spot.

There are many tried and true barbecue joints in Dallas where I could have stopped for lunch, but I'm glad that I gave Lakewood Smokehouse a shot. With food like this, they're certain to do well here.

Desperately in need of some fresh air and some fresh scenery today, I made it a point to get out in search of barbecue. The Cross-Eyed Pig wasn't far from home, and it was also fairly close to our favorite park, so me and the little man could snag a tasty lunch and then go play. Not too shabby. 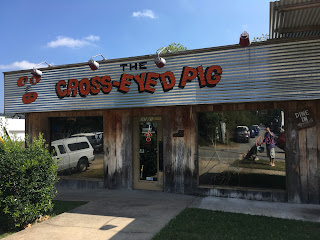 This East Little Rock joint is smack in between Allsopp Park and the Arkansas River, so you'd think that there would be plenty of business to go around here. I guess location isn't everything, since there were only two other tables of customers present the entire time at peak lunch hour. Oh well, more meat for me. The Cross-Eyed Pig doesn't look like much when you walk into the small interior dining space, but their big outdoor patio seems to be the main attraction. I'm sure it's a great spot for live music on warm summer nights. 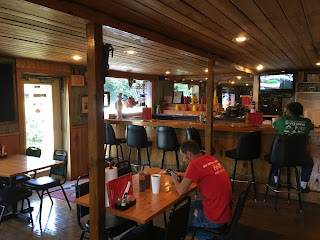 Dining out alone with a baby is no simple task, but our waitress was a sweetheart and tried to make things as easy as possible for me. She even hooked me up with a special off-menu two-meat plate of pulled pork and ribs, recommending their baked potato salad over the mustard variety. Sold. I picked baked beans for my second side dish and eagerly awaited the food to come out. I caught the scent of delicious pit smoke the instant things hit my table. 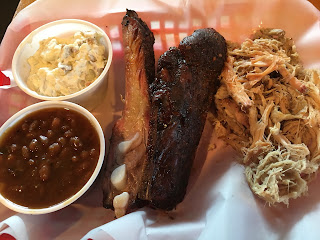 The sides are my usual starting place, which was easy today since they both looked awesome. The baked potato salad was creamy with big slices of skin-on potato. It was rich and decadent, with a nice crunch here and there. I'm glad I listened to the waitress. Cracked black pepper was visible throughout the baked beans, with plenty of onions mixed in, too. The flavors were primarily sweet, but slight vinegar undertones added a nice acidity.

Pulled pork will never replace brisket as the king of meats, but it's been growing on me more and more since leaving Texas behind. Theirs was tender, juicy, and well-seasoned. I also found a considerable amount of smoke in each forkful, as well as lots of tasty bark. Perhaps just a tad more salt would have been appropriate, but that's my personal preference. Adding sauce to this pork would have been heresy, and I am no heretic.

My big, meaty spare ribs looked fantastic on the plate. They had a deep reddish-black crust which appealed to my eyes as well as my taste buds. These bad boys were loaded with flavor and loaded with smoke. The peppery rub had a good kick to it, but wasn't so overpowering as to mask the natural pork. The well-rendered fat was also a pleasure to eat, diet be damned.

The Cross-Eyed Pig was just what I needed today. My baby boy seemed to enjoy the nibble of pulled pork that I fed him too, but to be fair he's also partial to dryer lint for some reason, so take that as you will.