There would be plenty of fish to go around during my three-day Bahamian adventure, but I wanted to throw some land-faring animals into the mix, too. As luck would have it, there was a barbecue restaurant right in the Atlantis resort where I was staying. But I didn't want overpriced touristy food, I wanted real local cuisine. My cab driver recommended Bahama Grill as a place to score both ribs and conch, and his sentiments were shared by three other locals that I spoke with. Done and done. 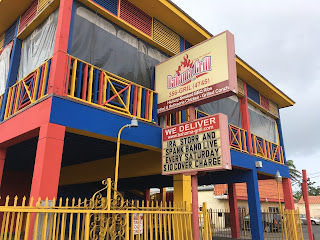 One thing I learned rather quickly is that most of these restaurants don't have a numbered physical address, just a general street location. Luckily my driver knew where to find the place. It had just started to rain when I arrived at Bahama Grill, so perfect timing. I think I was their only customer, certainly the only one sitting up top on the colorful covered patio. There was a pleasant breeze from the storm, but any relaxing tropical atmosphere that might have been had was drowned out by the noisy truck traffic directly below. 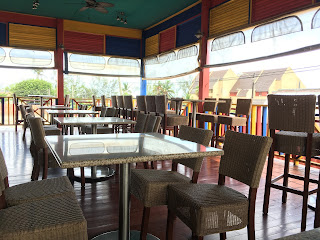 Beach body be damned, I ordered up a half-rack of pork ribs, a half-rack of beef ribs, and a half-dozen conch balls. Who needs side dishes anyway? My food took a while to come out, certainly longer than expected. I guess they were working on island time. 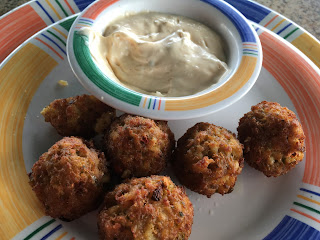 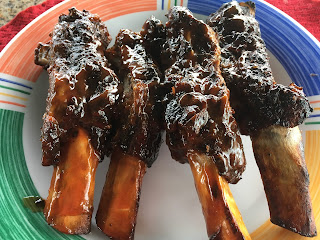 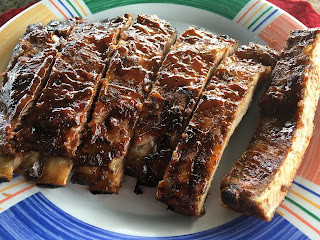 The conch balls were magnificent. Far from a pre-packaged frozen appetizer, these little deep fried delights were full of fresh ground conch, rolled with herbs and spices. They were light and fluffy, and the handbreaded balls fell apart with ease. Conch is about as chewy as the average calamari, but more flavorful in my opinion. I also loved the accompanying remoulade-type sauce, which certainly jazzed things up a bit.

There may have only been four beef ribs to this supposed half-rack, but they were certainly massive. The tender, succulent meat had a good char from the grill, but no smoke that I could uncover. A thick slathering of semi-sweet barbecue sauce produced the dominant flavors here. While the beef itself was tasty, I do wish they had removed the membrane from the bottom of my rack. A couple of the ribs were also pretty fatty, and despite the nice black char on the fat, it wasn't very well rendered.

Although rather diminutive compared to the beef ribs, the pork bones were still big and meaty in their own right. There was a great crust that was noticeably more well seasoned than I found on their beef counterparts. The meat came off of the ribs cleanly just as it should, with only a little effort needed. As expected, the same thick barbecue sauce dominated things here as well. I didn't find any smoke on the pork ribs either, but the tasty grill char was more prominent.

I'm guessing that Bahama Grill charbroils or chargrills their ribs instead of properly smoking them, but they still made for a decent lunch. Even though the ribs weren't quite up to my usual standards, they're probably about the best you'll find on this island chain. Hey, at least the conch was good!