I've long been intrigued by the Lil' Choo Choo BBQ food truck and their locomotive-themed smoker. A few months back, a fire broke out in a small retail strip in south Nashville, snuffing out several businesses in its wake. From these ashes, Lil' Choo Choo's first brick and mortar operation took root. 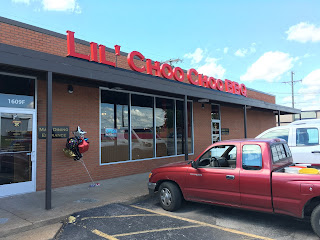 According to their seldom-updated Facebook page, Lil' Choo Choo's grand opening was originally scheduled for August 1, 2016. Due to unforeseen delays in obtaining their Use and Occupancy certification, things got pushed back a couple of weeks to August 15. I had eagerly watched this joint take shape, and my heart was set on attending the grand opening, no matter the date. After all, what kind of barbecue fanatic would I be if I didn't show up on Day One to scope things out? 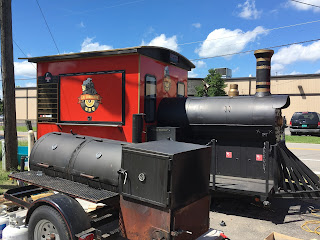 The interior at Lil' Choo Choo BBQ is a lot more bright and modern than you'd expect for this part of town, no offense intended. Railroad crossing signs, train-line logos, and neons tie their whole aesthetic together nicely. It's cohesive and amusing without being over-the-top or kitschy.

First-day jitters and hiccups are common for restaurant openings, but from what I could tell things here got off without a hitch. All of the employees were super friendly and checked on me often. They also knew the menu well, and I heard them giving good suggestions to indecisive customers studying the menu. Clearly the owners had spent plenty of time making sure that their staff were trained properly. Kudos. 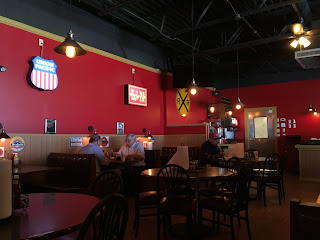 Lil' Choo Choo's train theme unsurprisingly spills over into their menu as well. Menu items with names like The Conductor, The Penn Station, and The Brakeman made things interesting as well as fun. But with three meats and two sides, the L&N dinner plate is definitely the way to go. I loaded mine up with pulled pork, pulled chicken, brisket, Porter Potato Salad and Highrail Jalapeño Mac and Cheese. All aboard! Next stop: obesity. 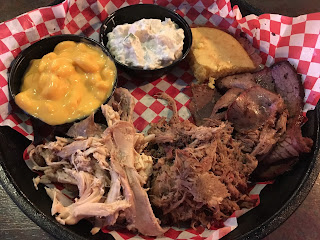 The mac and cheese had a ton of delicious, melty cheddar coupled with a distinct bite from the jalapeño peppers. It was just spicy enough to make things exciting without destroying my palate. I could really taste the dill in this potato salad. I'm not generally a dill fan, but for some reason potato salad is my one exception. The mayo base wasn't overly thick, which I liked. I also enjoyed the crunch from the assorted veggie mix-ins.

Unlike a lot of smoked poultry out there, their chicken was tender as could be and not the least bit dry. My serving came with big hunks of spectacular skin scattered throughout. The crispy, blackened skin obviously had the most flavor, but the rest of the juicy meat also carried a great smokiness. This was a stellar effort for barbecue chicken.

The thin-sliced brisket had plenty of nicely-seasoned bark to go around. It had a prominent smoke ring and an equally smoky taste. I received a nice combination of lean and fatty slices, with both kinds being tender and hard to stop eating. What fat I did get was well rendered, enhancing the already smoky meat even more.

Not to be outdone, the pulled pork had a great smoke level as well. Each bite was tender, juicy, and full of savory bark. I'm sure it works well for sandwiches, but I loved it all by its lonesome. Lil' Choo Choo has half-a-dozen different sauces available, though I doubt that any of them could have improved upon the natural pork.

I'm really glad that I was able to make it for the grand opening. If Lil' Choo Choo BBQ keeps slinging out food of the caliber I tasted today, they'll definitely be among Nashville's top players.

With an immediate need to give my eyes a break from the endless spreadsheets, as well as a growing need to calm my rumbling stomach, I set out in search of a quick workday barbecue lunch. Mary's Old Fashioned Bar-B-Que Pit is one of the few places close to my office that I hadn't yet crossed off my to-do list, so I figured that today was as good a time as any. 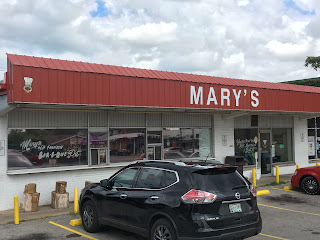 This north-Nashville landmark has been in operation for over half-a-century. Mary herself has since passed away, and her granddaughter and grandson-in-law now run the show. I hoped that Mary passed down her culinary know-how along with the bricks and mortar.

Once you get within sight of the old walk-up-service windows on the building's front facade, Mary's immediately seems something quite ancient. The windows are no longer in use, but their nostalgia-inducing presence is still felt. That aside, Mary's is rather unassuming and plain as far as restaurants go. If you were expecting anything remotely resembling ambiance here, then you came to the wrong place. Mary's is about one thing and one thing only: food. 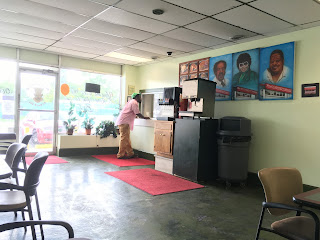 There are no multi-meat combos (and, incidentally, no beef) on the menu at Mary's, but that didn't stop me from creating a sandwich duo to compensate. My lunch o' smoked goodness included a pork shoulder sandwich and a dark-meat chicken sandwich, as well as a side of potato salad. I was surely going to spend the rest of the workday in a full-on food coma. 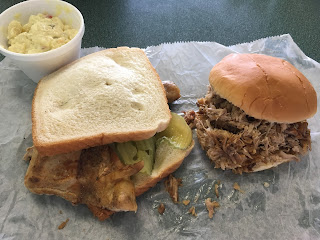 The potato salad came pre-prepared out of a store-bought tub. Ugh. It was passable, but really not worth describing in detail. My compliments to Kroger, I suppose.

Their regular pork shoulder sandwiches are served on basic grocery store hamburger buns, so corncakes are definitely the way to go. Unfortunately for me, they were out of corncakes today, so I settled for the hamburger bun. Thanks again, Kroger! The pork was tender and moderately juicy but didn't pack a lot of punch in the smoke department. There wasn't much seasoning to be found either, even though there was plenty of bark to go around. I did enjoy the crunch and acidity of the pickle slices that they added though.

To my surprise, the chicken sandwich was literally just a bone-in leg quarter stuck between some white bread, as opposed to the customary pulled chicken. The bread had soaked up so much juice that it was a soggy, useless addition. On first glance, the chicken skin looked a lot more pale than I expected for barbecue chicken. I dug in anyway, and my initial bite revealed an excellent heat level from the spices. The meat itself was a little dry, and the skin was a little limp. There was no meaningful smoke to be found here either. All in all, the chicken was fairly boring despite its spiciness.

I wish I could have visited Mary's Old Fashioned Bar-B-Que Pit in its heyday. Sadly, the current iteration of Mary's isn't worth a return trip.