The Smokey Mountains are quickly becoming one of my favorite spots for a nice weekend getaway. Our last excursion to Gatlinburg, Tennessee was back in January when the morning temperatures were around 17 degrees. Thankfully we were treated to much better weather this time around, and the color-changing leaves made things extra scenic. After a morning of hiking, my wife was gracious enough to let me replenish my spent energy at Hungry Bear BBQ. 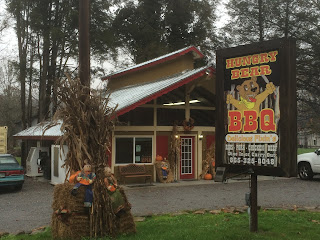 There are two Hungry Bear locations in Gatlinburg, but the one farthest outside of town seems to be the original joint. I much prefer experience over convenience, so this was an easy decision to make. Plus it was right on the way to our scheduled afternoon hike trailhead. Cast iron pans and various bear-themed knickknacks adorn the walls here, adding to the already rustic charm of it. I could see a small smoker hard at work just out our window, which is really all the ambiance you need for barbecue. 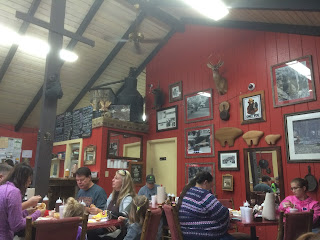 The more food I can eat, the more accurate an opinion I can form about a place. With that in mind, I ordered their Combo Four: ribs, pulled pork, chicken, and brisket. This dinner plate also comes with two side dishes, for which I selected potato salad and mac and cheese. 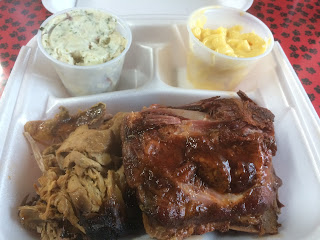 Hungry Bear's gooey mac and cheese didn't blow me away, but it was excellent comfort food on a cold, rainy day. A little bit of black and/or chile pepper would have jazzed things up a bit. The potato salad was fairly bland and served ice cold. I was hoping for pickles or maybe some mustard in the mix, but no such luck. My wife sampled both of my side dishes and echoed the same sentiments without any prompting on my part, so I feel fairly confident in my analysis.

I dug into the chicken first, mostly because if its convenient placement near the top of my meat pile. It had a great flavor, especially in the well-seasoned skin. There was just a hint of smokiness, although that's fairly typical of barbecue chicken. My wife ended up with mostly white meat in her chicken sandwich, which she found a bit dry, but my serving was all dark meat and all tender.

The ribs sadly disintegrated with only minor prodding from my plastic utensils. As expected, the rib meat was also sort of mushy, which is far too often the unfortunate byproduct of striving for a "falling-off-the-bone" quality. I liked the flavors well enough, but the lack of any smoke left me wanting.

My chunks of brisket had the texture of a pot roast and were a little tough to chew at times. I found only minimal smoke here as well, despite the prevalent rosy smoke ring. The flavors were passable in general, but not quite up to par.

The pulled pork was definitely the best of my four meats. It was very tender and rather juicy to boot. The pork had soaked up much more smoke than the rest of my combo, and the saltiness was right on point. The few pieces of bark that I found were exceptionally good.

Toward the end of our lunch, I saw the pitmaster (if you can really call him that) taking slabs of ribs out of the smoker. They looked amazing and visibly had just the right amount of give to them. In short, they were perfect and ready to eat. To my dismay, however, he then slathered on a thick layer of sauce, wrapped them in foil, and back in the smoker they went. 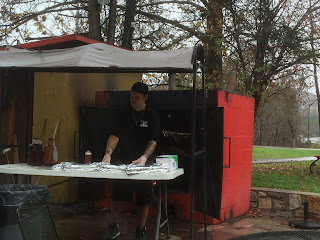 This obvious faux pas explains precisely why my barbecue plate was severely lacking in terms of both texture and flavor. The meat continues to steam itself to death inside the foil, which also prevents any additional smoke from penetrating. I had initially considered rounding Hungry Bear BBQ up into three-star territory, but when their core problem stems from such a fundamental error, I simply can't abide.