Some friends of ours came to town for the weekend, along with their beautiful eighteen-month-old daughter. The adult lady-folk were otherwise engaged, so we had a "Two Men and a Baby" thing going on for lunch. I couldn't think of a better pick than B & C (Bacon & Caviar). Although they have neither bacon nor caviar on the menu, the food is still incredible. We didn't want the hassle of, or the drive involved with, the farmer's market, so we headed for their Melrose location in search of some phenomenal 'que. 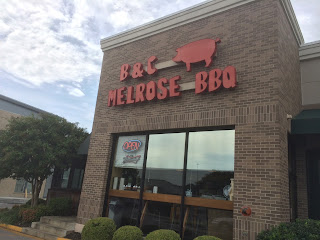 Wood-paneled walls and modern/rustic decor give B & C a rather inviting atmosphere. The dining area isn't the largest I've encountered, but I'm sure it serves its purpose just fine. They weren't very busy when we arrived at 11:00am, though that was precisely why we chose to go at opening time. They actually had highchairs, which made the little one happy, or at least it made her less mobile. Having the dining room mostly to ourselves was also perfect for those few high-pitched squeals from time to time. 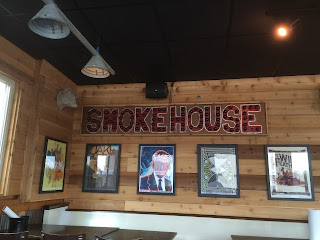 Sadly, there are no multi-meat combos on the B & C menu, although I did my best to create one of my own. I ordered a 1/4 Rack St. Louis Style Ribs Plate, as well as a half-pound of Brisket and a half-pound of Pulled Pork. My plate came with two sides, for which I selected their Mac N Cheese and the Grit of the Day, which happened to be Buffalo Chicken Grits. It was clearly more food than I (or anyone else for that matter) needed, but this way I'd have some barbecue leftovers to take to work on Monday. Win-win. Knowing my intentions, I had the good sense to request my a la carte meats in to-go containers. 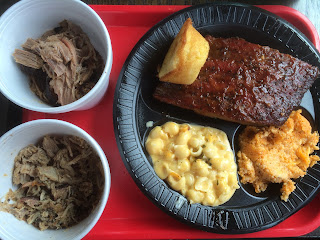 As advertised, the Buffalo Chicken Grits had a distinct buffalo sauce flavor. They were decently spicy and really, really tasty. The grits themselves were just slightly al dente, which I loved. Far from basic grits, these had pulled chicken mixed right in. It was very tender and added a great texture. The gooey, melty Mac N Cheese was equally spectacular. I'm not sure what combination of cheeses were used, but they worked great together. Their choice of spices also gave this comfort dish an excellent zestiness. Shells were clearly a better choice than elbow macaroni, mostly because they trapped big gobs of cheesy goodness inside.

The brisket wasn't exactly chopped, but it had gotten broken up slightly in order to fit inside the cylindrical styrofoam to-go container. My luck with brisket has been somewhat hit-or-miss since moving from Texas to Tennessee, so I was extremely pleased to find some glorious black bark on these slices. The bark was packed with seasoning and a smokiness that matched the red hue beneath. The fattier pieces were beyond compare and just melted in my mouth. I could have eaten this brisket all day long, which made it exceedingly difficult to leave any for leftovers.

Pulled pork is slowly growing on me, especially when I eat some as good as this. There was a great saltiness which made each bite a pleasure. I found plenty of smoke-kissed bits of meat scattered throughout and a decent smoky flavor. The pork was also amazingly tender and juicy, yet still had a substantive meaty texture. There was absolutely no reason to adulterate this meat by adding sauce. I was really glad that I had gotten extra for work lunches.

The big, meaty spare ribs were cooked perfectly. They cut easily enough with my plastic knife, but it still took a slight tug to remove meat from bone, as well it should have. Each bite of the ribs was very tender and very juicy. There was a nice smoke level here as well, but not so much as to mask the natural pork flavors. A hefty dusting of black pepper gave the pork a great spiciness and a great taste. The ribs had more of a glaze than a sauce coating. It was a mild semisweet tomato-based kind, which actually added to the other flavors rather than overpowering them.

Our tiny lunch companion loved her pulled chicken too. I think she ended up dropping a half-dozen plastic spoons on the floor in the process, but at least she had fun doing it. We had a great time giggling both with and at her, and having delicious food made things even better. Thanks, B & C!

We got a pair of free Nashville Sounds tickets through my wife's job, which is pretty awesome in and of itself. Due to a rain-out the night before, we fortuitously found ourselves treated to a double-header against the Albuquerque Isotopes. Sweet! I wasn't expecting to find barbecue at First Tennessee Park, but when I saw Smokehouse BBQ amongst the concessions, I knew that it would inevitably be the source of my dinner. 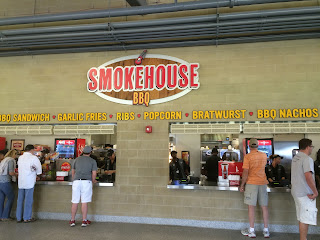 There had been a slight front blow through recently, so the weather was a beautiful eighty-two degrees this evening. First Tennessee Park is fairly new, and it is pretty snazzy for AAA ball. The game itself was really fun and was something that has been on my Nashville bucket list for the past year. The seats were half-full at best, which was a real shame. I know it's not MLB, but it's hard to beat a night out at the ballpark no matter who's playing. 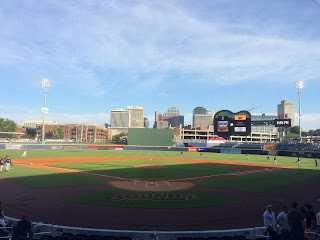 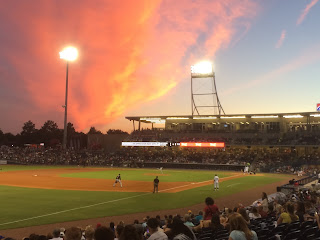 My wife is a bit of a baseball traditionalist, so she snagged a hotdog and some Cracker Jacks for dinner. I, however, couldn't resist an order of Ribs and Fries. 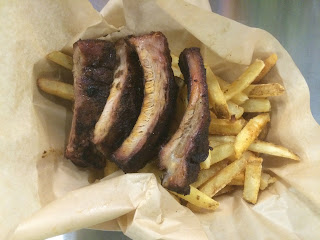 I didn't anticipate anything other than pre-frozen fries, and that's exactly what I received. At least they were hot and freshly cooked. Some of the fries were dusted with a little barbecue seasoned salt, which really jazzed things up.

The ribs were hickory smoked, or so they claimed at least. While ordering, I was asked if I wanted my ribs wet or dry, and naturally I opted to eat my ribs sauceless. Surprisingly, the minimal seasoning was actually rather good. It was decently spicy, with a slight sweetness every now and then as well. The meat came off with only a moderate tug, but was fairly dry and unpleasantly chewy. Although I tasted an ever-so-slight smokiness in a few bites, it faded really quickly. I assume the ribs had been sitting in a warming tray for quite some time before they ended up on my plate, and I suppose that I should have known better.

Sub-par ribs aside, we had a great time at the ballpark. The best part of the night was a conversation that the mom sitting next to us was having with her three-year-old. They had already been in their seats for several innings before I heard, "Henry, what are you chewing on? Oh my g...you've had that piece of broccoli in your mouth since we left the house! No, forty-five minutes is long enough to chew. Swallow it now!" After about five minutes, several counts to ten, and four mouth inspections, Henry finally swallowed his food. It took every ounce of restraint I had not to fall out of my seat laughing multiple times.

Despite their valiant efforts, the Sounds lost the first game 6-0, but they rallied in round two to win 3-2. Well done, boys.

This would make my third visit to Puckett's in the past six months. What can I say, it's a fantastic place to bring out-of-town guests who want the Nashville experience without being overly touristy. Plus the food is always delicious! 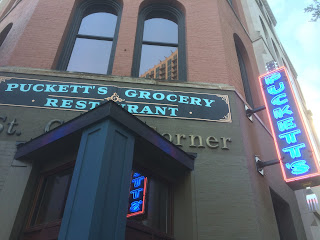 This time I only made our reservations two days ahead of time, and I was surprised to find so many available. The vacant dinner slots must not have lasted long though, because I overheard the hostess forecasting an hour-long wait time to the couple in line ahead of us. In order to properly entertain our guest, I had requested a table somewhat near the music stage, and Puckett's was happy to accommodate.

Tonight we were treated to the musical talents of The Mann Sisters. Both of these ladies had beautiful voices and made our time at Puckett's quite enjoyable. We especially liked their Fleetwood Mac covers. Hopefully I'll get the chance to see them perform somewhere again. 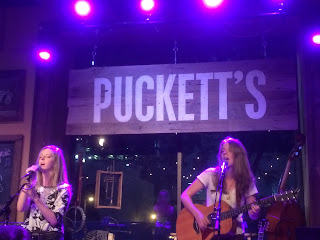 I had considered an order of the Cherry Smoked Hot Wings for an appetizer, but our visiting dinner companion apparently isn't a fan of the bone-in variety. Fair enough. We got some Fried Green Beans instead, which honestly sounded just as good. 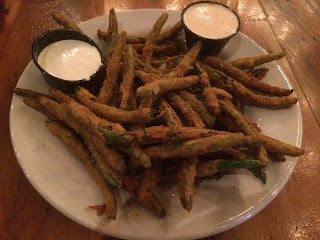 The beans came out nice and al dente, with just enough batter to crisp them up. The batter was also nice and light, allowing the beans to still stand out. I liked the accompanying chipotle bacon ranch dip a lot. It could have perhaps been a little spicier, but the flavors were superb.

The only barbecue item on Puckett's menu that I hadn't yet sampled was the pork rib entree, and I intended on rectifying that tonight. I ordered a half-rack of their Cherry Smoked Baby Back Ribs. These dry-rubbed, "Memphis-style" baby backs come with baked beans and potato salad, which probably would have been my side dish picks even if they hadn't been mandatory. 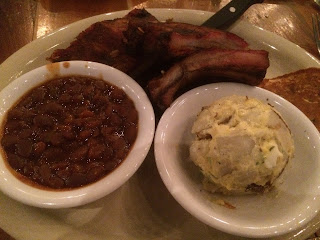 Potato salad is my favorite barbecue side, and this one did not disappoint. The big pieces of skin-on potato were bound together by just enough mayo to do the job without overpowering the natural potato flavors. I really liked the abundant pickles and onions as well. It was served room temperature, which was a nice change of pace from the ice-cold potato salads I often find. The beans, much like our green bean appetizer, were correctly cooked to an al dente. They were pleasantly sweet, with a somewhat spicy kick on the back end.

Although hickory is probably a more common choice for smoking pork, fruit woods like cherry do a great job, too. As a result of the mild wood, the ribs were only moderately smoky. There was also a slight sweetness, which stood out all the better without an overpowering smokiness. The meat itself was cooked perfectly. It took only a light tug to separate meat from bone, and each bite was extremely tender. For true Memphis-style, they probably need a heftier dose of dry rub, but otherwise the ribs were great.

Now at three for three, Puckett's has yet to let me down.