It's so much easier when the barbecue comes to me! I've been searching for an opportunity to test out the Thunderbird food truck and their enticing smoked chicken. This endeavor took a little more effort than anticipated, but I eventually tracked them down.

A few weeks ago, I made my first attempt to enjoy Thunderbird's poultry. According to their official website and their Facebook feed, Thunderbird was setting up shop at the partially-completed ONEC1TY Nashville, which I say as if I had even the slightest idea what ONEC1TY is. From what I could find online, this sustainably-designed complex is "a vibrant urban community...that will serve as a center of technology-enabled commercial, residential, research and retail activity catering to the idea that mindful healthy living can be made easy." Translation: some feel-good millennial hipster crap. Not exactly the kind of place that you'd expect to find barbecue chicken, but I go where the smoke takes me.

I drove and walked around the advertised 8 City Boulevard location for half an hour, but there was no sign of their truck anywhere. Finally I gave up and snagged a sandwich to salvage the few remaining minutes of my lunch break. After commenting on Thunderbird's Facebook page to vent my frustrations, they responded promptly and apologized profusely. Apparently they had been required to set up off of another entrance to the ONEC1TY compound, far removed from the actual address they had posted for lunch service. They also mentioned that they had arrived to that spot at 11:30am, although both their website and Facebook post confirmed an 11:00am scheduled start time. Thunderbird offered to comp my lunch if/when I came back to try them another day, which I certainly appreciated, but that's not how I roll.

Thunderbird was slated for another lunch service at ONEC1TY Nashville today. Armed with the newfound knowledge that 8 City Boulevard really means a parking lot sort of nearby 8 City Boulevard, and that 11:00am means 11:30am, I decided to give the Thunderbird truck another go. 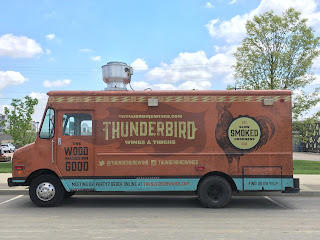 Unable to decide between the Thunder Thighs and the Thunder Wings, I did the only sensible thing and ordered a couple of each, as well as a side of the Smoked Mac and Cheese. These three items are all smoked over pecan wood, and that was readily apparent. The delicious smoky aroma permeated my truck instantly and drew the envy of my coworkers upon my return. Within minutes of sitting down at my cubicle, I had several of them peeking over the top like Wilson from Home Improvement. 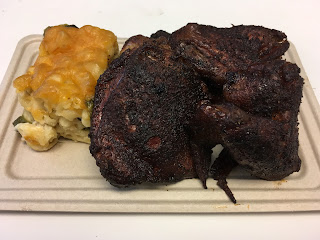 I was initially unsure about the identity of the peppers protruding from my helping of macaroni, but one bite was more than enough to confirm that these were definitely jalapeños. The creamy cheese within helped to temper the heat somewhat, and the crusty melted cheddar on top had absorbed a good deal of the pecan smoke. While this wasn't your standard "comfort food" mac and cheese, it was immensely tasty and a welcome addition to the plate.

The crispy skin on my meat was so dark and black from the smoke that I almost didn't believe it was chicken. Both the wings and thighs were heavily seasoned, with a clear emphasis on pepper. I found the chicken to be an interesting combination of smoky, spicy, and sweet. The sweetness in particular was a surprise, with the overall the flavors being spicy but well-balanced. Every single bite of this yardbird was moist and super juicy, particularly the dark meat thighs. I found myself longing for some Alabama white sauce, if for no other reason than to render assistance to my burning tongue.

So, in the end, was Thunderbird's smoked chicken worth all of the extra effort? You're darn right it was!

My wife and I had planned our little man's baby dedication at church for Easter, and as a result we needed to feed several friends and family members who were kind enough to join us on this momentous occasion. Barbecue immediately came to mind, for obvious reasons. In terms of both quality and selection, Martin's Bar-B-Que Joint was an easy decision for our meal. I called in an order a week early, which they told me that I could pick up at 10:00am on Saturday (an hour before opening). At that time, I was sure to score the day's first fruits. 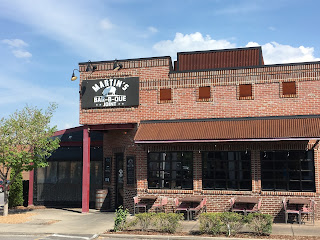 I had ordered up a heck of a feast: two pounds of pulled pork, two pounds of brisket, two quartered chickens, four links of beef sausage, and a quart each of potato salad, macaroni and cheese, broccoli salad, and pinto beans. Plus a duo of pecan and fudge pie for dessert. All this to feed eight adults and one child! I may or may not have intentionally over-ordered, hoping for some leftovers to take to work the following week. We weren't eating this massive smorgasbord until Sunday, but it didn't seem fair to rate Martin's 'que on a reheated basis. So I did the only respectable thing and sampled all of our non-dessert food before anyone else arrived. 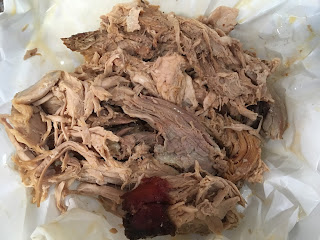 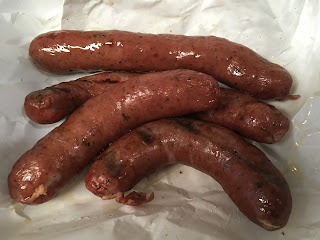 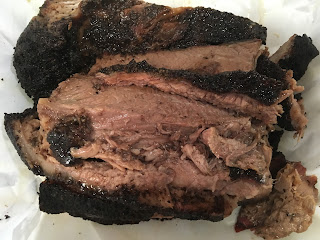 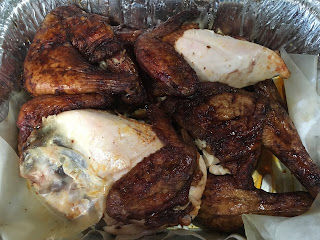 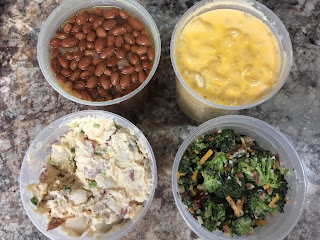 I invariably start my barbecue reviews by tasting the side dishes, which was made all the more difficult by the fact that I had to endure the smell of delicious smoke for my entire twenty-minute drive back home. The potato salad was creamy and crunchy at the same time, with plenty of potato skins for added texture (and I guess some vitamins too, if you're into that sort of thing). It was also slightly spicy, a welcome surprise. The macaroni was as homey and delicious as you might expect. Far from blue-box mac and cheese, the large elbow pasta and gooey melted cheese were just right. I found the pinto beans to be savory and perfectly al dente, much preferable to overly-sweet baked beans. Cheddar and cranberries offered a vibrant array of flavors in the broccoli salad. This was the only one of our sides that I had eaten before from Martin's, and I think I may have enjoyed it even more this time around.

As for the meats, first up was their pulled pork. Rather than the finely-shredded pork I was expecting, we received big hunks of porcine goodness. It was tender and exceptionally juicy, with slight vinegar overtones from the mop sauce. The bark was well seasoned and moderately smoky, but not so much as to mask the natural pork flavors. In short, it was prepared exactly as it should be.

Good smoked sausage isn't something I find much of outside of Texas, but this was really tasty. Each link had loads of black pepper scattered throughout. There was a good snap to the casings, which exploded with yummy beef juice when sliced. All of the pepper produced a slight spiciness, balanced out by just enough salt to make things interesting.

On my first outing to Martin's, I received some rather lean slices of brisket. They were fantastic, but I always find myself longing for the fatty brisket point. Today I was in luck, and it was astonishing how good the brisket was (a sentiment shared later by every single one of our guests). Its jet black bark was loaded with flavor, and the tender meat beneath was super moist. Salt and smoke were immediately present on my tongue. The fat was so well rendered that I could have eaten it with a straw (and might have too, had I been alone at the time). Truly fantastic.

I just sliced off a small sample of the chicken, since there wasn't really a great way to covertly sneak a whole quarter-chicken ahead of time. A dark meat thigh hit the spot today. The meat was tender and incredibly moist, and the flavorful skin was seasoned to a T. There was an unexpected heat level that crept up slowly with each subsequent bite. It was also very smoky, an unusual quality for barbecue chicken.

Even though it would be ungentlemanly to review Martin's based on anything less than the fresh meat that I had received Saturday morning, I thought it worth mentioning how things turned out during the reheating process. In order to preserve as much moisture as possible while the meats warmed up in a 300 degree oven, I drizzled a little beef broth over the brisket and sausage, put a few dollops of butter in with the chicken, and added a swirl of apple juice to the pulled pork. Certainly there were a few deficiencies that I noticed in comparison to the fresh versions of each meat, but, in all honestly, they were very negligible. If I hadn't had a reference point from the day before, the reheated meat would have still merited at least a four-star rating.

Frequent readers know that I am not much of a sauce person when it comes to barbecue. That said, our sauce options looked far too good to pass up today. 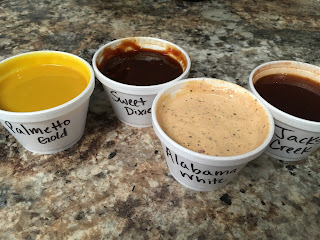 Each of the four sauces was tasty in its own right, but these were my favorite meat/sauce combinations: brisket with their thin, vinegar-based Jack's Creek, pulled pork and the zesty Alabama White, and chicken with the mustard-heavy Palmetto Gold. Although these may not be the pairings you would expect, they are the ones that I found the most cohesive overall.

The food was all so good that I ended up eating far too much in far too short of a time. After a few hours of letting my stomach settle, it was time for dessert. I didn't quite feel up to two whole slices of pecan and fudge pie, so my wife and I split a slice of each. 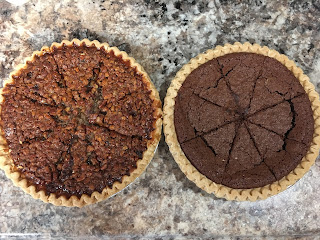 The pecan pie was gooey, crunchy, and spectacular. Pecan pie can often suffer from too much sugar, but this one was just sweet enough without hurting my teeth. Martin's fudge pie, on the other hand, was ever so decadent. Its rich chocolate flavors hung in my mouth, making me crave a big glass of cold milk. The crust on both pies was nice and buttery, so no need to discard that in favor of the filling.

I really can't say enough about how awesome our meal from Martin's Bar-B-Que Joint was. They have several satellite locations scattered across Nashville metro, as well as spots in Louisville, Kentucky and Morgantown, West Virginia. But for my money, I'll stick with the original down in Nolensville.