I always like to find new barbecue joints to try when we're on vacation. My wife, not so much. Of all the purveyors of smoked meat to be found in Charleston, South Carolina, Nick's Original Bar-B-Q offered the best mix for both of us: barbecue for me, and plenty of burgers, sandwiches, salads, and the like for the Mrs. This place is a member of the Jim 'n Nick's barbecue family, so I had high expectations. 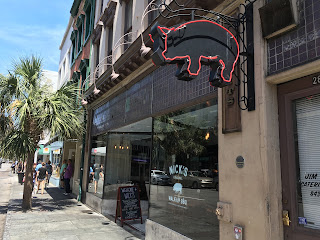 I really liked the open floor plan at Nick's. They had great music pumping to liven things up, and I'm sure the fully-stocked bar would be put to good use as the day progressed. The decor was an eclectic mix of rustic and vintage, which somehow gave the place a modern feel. 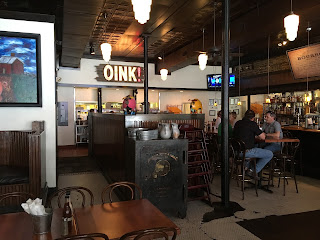 To warm up my palate, I started with an order of the Heavenly Deviled Eggs, only partially because of the play on words. 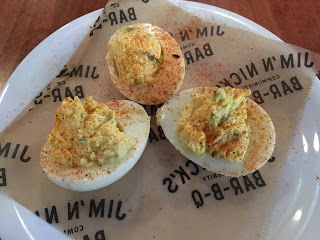 The deviled eggs were loaded with smoked paprika and just the right amount of salt, which added a nice savoriness to the slightly sweet mixture. I also enjoyed the crunch from the diced pickles. Three eggs were probably enough, but I'm sure I could have eaten at least a baker's dozen.

Nick's has an enormous 4 Meat Combo on the menu, and at only $19.00 it's a heck of a deal. My wife/primary care physician strongly suggested that I settle for a trio, but I like to live dangerously. I ordered this four-meat behemoth with pulled pork, brisket, smoked wings, and ribs (an extra $2.00, totally worth it). For my sides, I picked potato salad and fried green tomatoes. 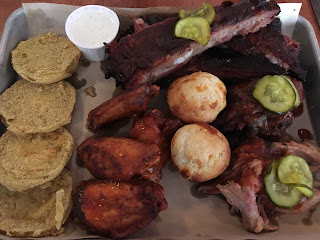 The light cornmeal batter was a nice coating for the tart tomatoes. They were a little salty, but I like a bunch of sodium in my diet anyway. The potato salad was sweet at first bite, followed by a sneaky spiciness. It had just enough mustard to make things interesting without being overpowering.

I was sad to find my brisket chopped, although the flavors more than made up for the presentation. The well-rendered fat had smoked up quite a bit of smoke, and the delicious bark was a pleasure to eat as well. Nick's spicy barbecue sauce was a nice addition, but didn't detract from the natural beefiness.

Truth be told, I was expecting plain smoked wings rather than buffalo wings, but these were tasty enough to counteract my flawed expectations. The chicken was very tender and incredibly juicy, and the crisp skin was just glorious. I noticed a mild smokiness, at least best I could tell through the buffalo sauce. Even the mild wings were fairly spicy, so I'm glad I didn't opt for hot wings.

It was difficult to find any smoke in the pork, and it was also a touch too dry. There was only a mild flavor to the meat, so their tomato-based sauce was definitely necessary to add a little depth of flavor. Overall the pork was ok, but not that great.

The huge, extra-meaty spare ribs looked rather menacing on the plate. They had an exceptional, well-seasoned crust, and there was a great smokiness throughout. Best of all, the juicy pork ribs weren't served drowning in sauce, letting the meat stand on its own. These were easily the best part of my meal.

Mediocre pulled pork aside, Nick's Original Bar-B-Q was a great pick for lunch, and its downtown Charleston location was ideal for our itinerary.

East Nashville BBQ Co., one of the newest players on the Nashville barbecue scene, represents the continued revitalization of Nashville's once-ailing eastern borough. When I was in college here a decade ago, one did not venture over to that side of the Cumberland River, especially not at night. Now things are looking up, and I've been eager to experience more and more of what East Nashville has to offer. 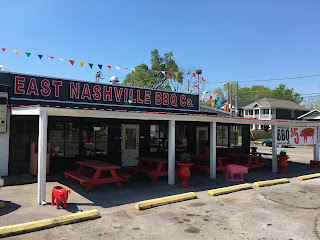 The big covered patio was perfect for a beautiful, cool day like today. I'm not sure what this building housed in its former life, but I like what East Nashville BBQ Co. has done with the place. It's a simple counter-order joint, no fuss. That being said, the lively red/black/gray paint scheme gives it a more modern feel. 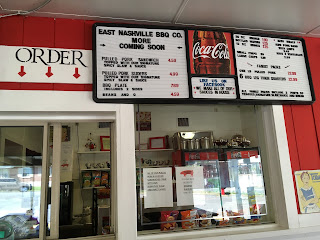 Options for smoked meat are pretty limited here, with the choice being confined to pulled pork or barbecued chicken. The menu board says "More Coming Soon," although they've been open for six or seven months, so I'm not sure what the holdup is. As their logo features a pig rather than poultry, I decided on the showcased offering and ordered a BBQ Plate of pulled pork. They were sadly out of potato salad, so I settled for baked beans and mac and cheese as my two sides. I also received a cornbread muffin and a portion of their spicy slaw (which I originally thought only accompanied the barbecue sandwiches). 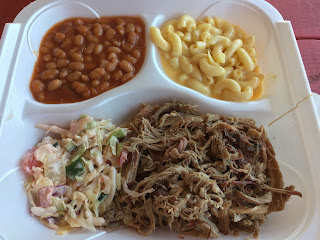 The macaroni was standard blue-box mac and cheese. I don't have any major complaints about it, other than being fairly boring. The beans had a decent sweetness to them but not much else. Some black pepper and/or jalapeño would really make this dish pop. It, like the macaroni, just sort of fell flat. I'm not normally a coleslaw person, but I gave theirs a try anyway. The slaw had a great spiciness. It also tasted fresh and had an equally fresh crunch to the veggies. My cornbread muffin was just as tasty. There was a pleasant sweetness to the muffin, which crumbled nicely without being dry or dense. If East Nashville BBQ Co. put as much effort into the beans and the mac as they had the cornbread and slaw, they'd be in good shape.

I made sure to request my pulled pork sauceless so that I could get an accurate feel for their barbecue prowess. My taste buds kept searching for both salt and smoke, but were thwarted on both counts. I couldn't find any bark, pink/red smoky bits, or anything that would remotely suggest seasoning. The pork itself was also fairly watery. Not juicy, watery. At least it was tender.

After I'd finished as much of my meal as I was able, it occurred to me that there was no smell of delicious smoke in the air, inside or out. I peered through their fenced work area on the side of the building, and I could make out a pit and a few cords of wood, though none of it appeared to be in active use today. More troubling, one of the pictures featured on East Nashville BBQ Co.'s own Facebook page (they don't have an official website) includes the caption, "BBQ Chicken fresh out of the oven!" Wait...oven??? Surely this is just a poorly-conceived figure of speech, but sadly I have my doubts. Regardless of the cooking method employed here, the end result is disappointing.

Apparently I'm five years old, because one of my coworkers insisted on setting up a play-date with me and one of her friends. Sigh. Knowing my affinity for smoked meat, she decided that barbecue would be the best ice breaker. It was hard to argue with that. Hog Heaven is easily the closest barbecue joint to our office building, and even though I wasn't exceptionally impressed with it on my first encounter, I'm always willing to give places a second chance. 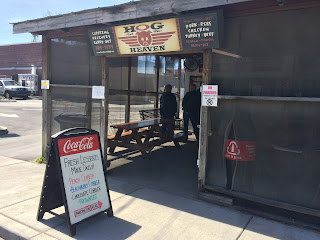 Despite its prime real estate next to Centennial Park and being a mere hop-skip-and-a-jump from Vanderbilt University, Hog Heaven is quite literally a barbecue shack. There isn't really any way for them to spruce things up at all either, unless they could somehow manage to hang pictures on a porch screen. That's ok, I came here for the food and the company more so than the ambiance (which is good, because there isn't any).

Having been disappointed by the spare ribs during my initial Hog Heaven visit, I thought it best to try a Pulled Pork Plate this time. Since I already was mixing things up meat-wise, I decided to opt for some different sides as well. I picked their BBQ Beans and Mac and Cheese, along with the mandatory cornbread pancake. Patrons are also presented with their choice of sauces. Here, I stood firm with the tasty white barbecue sauce that I had sampled before, on the side of course. 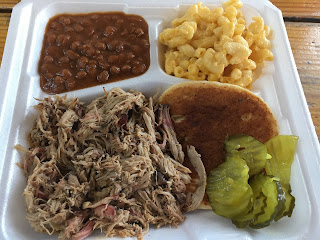 Last time 'round I received a mediocre, dry cornbread pancake with my meal. This time was no different. Maybe it needs more butter, I don't know. The beans had an interesting flavor. I found them slightly spicy, but the base was far too viscous for my liking. They could have used a little more salt as well. As expected, the macaroni and cheese was gooey and comforting. It was tasty enough for a quick lunch, but nothing to get overly excited about.

As for the pork, color me disappointed yet again. I struggled to find the taste of delicious smoke, but came up empty. The pork was also somewhat waterlogged, which was odd but probably indicates that it was left to steam itself inside of a large container prior to serving. There was no discernible salt or other seasonings, even on the few pieces of bark that I received. The one saving grace was their homemade white barbecue sauce, which added a depth of flavor and spiciness to the void. As I recall, this was the only thing that halfway salvaged the subpar ribs on my first trip here.

The adage "three strikes, you're out" comes to mind, but this ain't baseball. Two unsatisfying meals at Hog Heaven are about all that I can endure. Oh well, at least the company and the conversation were enjoyable.