To call Helen's Bar-B-Q an institution would be quite the understatement. Helen Turner, one of the few female pitmasters in the South, has manned (womanned?) the country-style open pits at her namesake barbecue joint for the past thirty years. With that in mind, I figured that a slight detour off the interstate and over to Brownsville, Tennessee was well worth the added travel time. If nothing else, the massive cotton fields that lay betwixt would be rather scenic, and perhaps the impending Memphis traffic would die down a bit by the time I finished my pit stop. 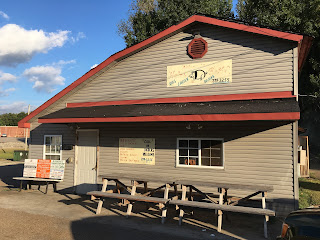 Helen's exterior signage is so worn and faded that I had to pull a u-turn just to find the place, missing it on the first pass. The term "hole in the wall" comes to mind, although "dilapidated house" might be a touch more accurate. They do have a couple of tables inside, but at non-peak hours these mostly seem to function as an employee lounge area. No skin off my back, it was nice enough outside that their picnic tables were a welcome dining choice.

You won't find any multi-meat combos advertised on Helen's menu, but don't be afraid to ask. Helen is a sweetheart, and she's more than willing to accommodate custom orders. I went all-in with a plate of pulled pork, ribs, and Polish sausage with their obligatory accompaniment of beans, potato salad and coleslaw. Even though I typically take my barbecue sauce on the side, I decided to take a chance with Helen. I did, however, stick with the mild sauce, so as not to tempt fate any more than necessary today. 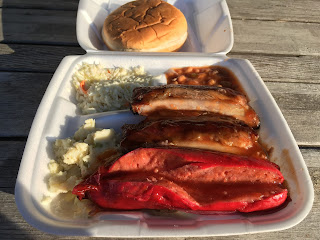 Theirs was more of a mashed potato salad than the diced-spud variety that I'm accustomed to. Still, it was rather tasty, especially with all of the pickles mixed in. Frequent readers know that I'm not a big slaw fan in general, but Helen's was pleasant enough. I did like the finely shredded cabbage, since me and big hunks o' vegetables aren't always on friendly terms. The beans had sort of a mild sweetness to them. They were fine, but I think a little jalapeño would have really sealed the deal.

I'm not entirely sure that the sausage qualified as Polish, seeming closer to the standard bright red hotlinks of East Texas fame. It had a great flavor with just enough spiciness to make things interesting. I do prefer my links to come with more of a snap to the casing though, the kind that you'll only find with sausage that's actually been cooked on a heated surface, whereas this link struck me as more boiled than smoked or grilled. Nonetheless, I still ate the whole thing with a smile on my face, so that should tell you something.

The pulled pork was tender and commendably juicy. I longed for some bark, but the well-rendered fat made up for things in that department (mostly, at least). Smoke shined through the barbecue sauce beautifully, meaning that the sauce is there as a flavor addition rather than the sole source. Just as God intended. Helen's sauce has a base that's not quite tomato, not quite vinegar. But one thing's for sure, it's delicious.

By the look of their ribs, I was expecting overcooked, fall-off-the-bone mush. I couldn't have been more wrong. The rosy meat was perfectly cooked and perfectly smoky, with just the right amount of seasoning to compliment without being overpowering. Much like the pulled pork, the ribs showcased a great marriage of natural flavors and sauce, each standing its own nicely.

I'm still a believer in predominantly sauceless meat, but Helen's Bar-B-Q almost brought me over to the dark side. Well done.

With just over two and a half hours to burn before my connecting flight to Montrose, Colorado, I thought I'd take a gander at what sort of barbecue could be had at Denver International. Almost three years ago to the day, I found myself sorely disappointed with what passed for pulled pork at Lefty's Colorado Trail Grille over in Terminal A. I was cautiously optimistic that Aviator's Sports Bar & Bar-B-Que would yield better results. If nothing else, I figured that I could always wash things down with a few local brews. 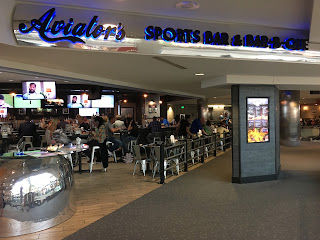 Unsurprisingly, nearly everything here is aviation-themed, including the somewhat perplexing handwashing sink right behind the hostess stand. I guess they expect people to get a little messy with the ribs. Far from a hole-in-the-wall joint, Aviator's is more of a sit-down bar and grill, complete with the standard wall o' televisions. What Aviator's lacks in non-airplane ambiance it certainly makes up for in people watching, and I had a prime spot beside the pedestrian throughway. 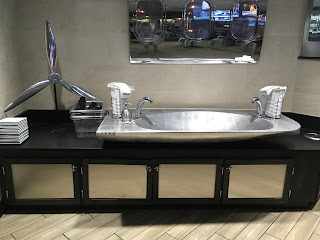 According to the Aviator's menu, their smoking is done with a combination of apple and hickory. This fruity/salty combo surely works great for pork and poultry, though I had my doubts about pairing it with beef. I was also unsure how far away this smoking was being done, but figured that I'd find out soon enough. Exorbitant airport prices aside, I ordered the Smoky Combo of smokehouse chicken, baby back ribs, and kielbasa sausage, plus a little brisket for a $3.00 upcharge. After all, when you're already paying $24.00 for a meal, what's another three bucks? This combo also came with mandatory potato salad, which was just fine by me. 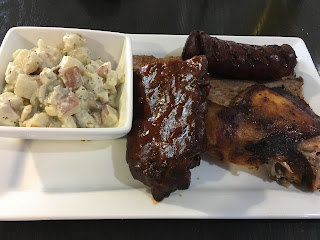 Their delicious mayo-based potato salad was laden with black pepper and pickles. The red onion was a nice touch, too. Each bite was both savory and slightly acidic, with just enough natural potato flavor present to still be noticeable.

While the lean slices of brisket looked tasty enough, the meat was fairly dry. It also lacked much meaningful smoke, though it could be found here and there if you really concentrated. There was decent seasoning on the bark, little as there was to be had. Overall the brisket was ok, but certainly not intensely satisfying.

A nice spiral scoring on the kielbasa added a flair of sophistication to my lunch. The sausage had a great char on it, obvious to both the eyes and the taste buds alike. There was also an ever-rising heat level that really crept up on me. I sincerely doubt that the kielbasa was made in house, but I thoroughly enjoyed it nonetheless. Particularly the spices!

Much like the rest of my plate, the chicken looked pretty dry, but thankfully it couldn't have turned out more juicy and tender. The blackened skin packed most of the flavors, and they were perfect. I couldn't pinpoint more than a modicum of smoke here either, though that's fairly common with barbecue chicken.

When I ordered, I was told that nothing came pre-sauced, but apparently that didn't extend to the ribs. There wasn't much to these bones at all; they were exceptionally tiny, even for baby backs. The meat came right off the bone, as expected but definitely not desired. The thick slathering of "barbecue sauce" tasted like 95% ketchup, so much so that I couldn't make it past my first rib.

The two best meats of my lunch turned out to be the ones that I was initially the least excited about. I finished my chicken and kielbasa, polished off my pilsner, and headed to my gate. Aviator's Sports Bar & Bar-B-Que will do just fine on an extended layover, but it wouldn't fare quite so well out in the wild.

I've had TJ's Bar-B-Q & Fish on my lunchtime to-do list for a while now, although I can't seem to remember why. It isn't exactly in the ritziest of Nashville's neighborhoods, but it is relatively close to my office. Best I can tell, they operate out of the attached garage to a converted house, while a crummy tattoo parlor and a "doctor" occupy the main living quarters. What can I say, I guess I'm just a sucker for hole-in-the-wall barbecue shacks. 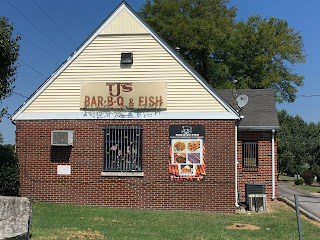 My initial plan was to dine-in, but on closer observation I'm not really sure that TJ's is a dine-in type of establishment. Their cash-only drive-thru line appears to be the only option, although they do allow walk-ups before dark. Just as well, all of the barred windows didn't really lend much to the ambiance, and I'd have felt a lot more comfortable with my Kimber locked and loaded on my hip anyway.

When a place has its two signature dishes right in the name, you'd be a fool not to try them both. I ordered up some pulled pork on cornbread and a whiting fish sandwich, with a side order of potato salad to round things out. The food took a little longer than expected, but I hoped that just meant they were busy frying my fish fresh. 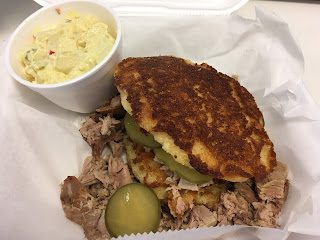 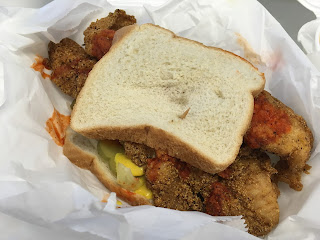 The potato salad was mostly ok, but there wasn't a ton of flavor to be had aside from its mustard base. My hunch is that it came from the grocery store.

I made sure to ask for the pulled pork without sauce in order to get a true sense of their smoking prowess. The cornbread was nice and buttery, though dense and pretty dry. My bottom piece was hard as a rock. The pork itself looked lifeless and gray, but I suppose looks can be deceiving, at least somewhat. Although it, like the cornbread, was fairly dry, the pork did pack a ton of smoke and seasoning. It was sort of lukewarm, and while I hate to cast unsubstantiated aspersions on a place, I think that their pork had simply been reheated from another day.

According to the menu, TJ's has been rated "#1 Fish" by The Tennessean newspaper. As far as when that rating was made or in what context, I really have no idea. Their whiting fish sandwich comes standard with mustard, pickles, onions and hot sauce, and I saw no reason to mix things up. TJ's fresh, flaky white fish was fried perfectly golden. The batter and the spice level on my gigantic fillets was excellent! Their hot sauce was just enough to add intermittent pops of flavor, and the pickles provided a pleasant crunchy texture. I'm not sure the mustard added a lot to the equation, but I suppose it did contribute to the overall combined taste if nothing else.

Were I to rate TJ's Bar-B-Q & Fish on the whiting sandwich alone, this would have been a glowing review. Sadly, there's more to the story than just seafood. TJ's would really have something special if they served their pulled pork as fresh as they do the fish. Until then, it will exist as a great fish house and a mediocre barbecue joint.