It's nearly impossible for me to drive through Memphis without stopping for some tasty 'que. My wife, who had just come off of an all-night shift, was sleeping soundly in the backseat as we made our way to Little Rock for the weekend. That gave me free reign to pick any lunch spot that my heart desired. Jackpot. There are still a few of the well-known players to check off of my Memphis barbecue list, but today I set my sights on One & Only BBQ, in part because they would have some non-barbecue options for my wife should she waken from her slumber. 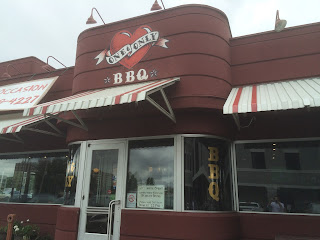 Ironically, One & Only is really "two and only," with dual locations in east Memphis' Audubon Park and River Oaks neighborhoods. I'm pretty sure that River Oaks is the original spot, but I opted for Audubon Park since it's just a little ways off of Sam Cooper and involved the shortest detour. Practicality doesn't always yield the most delicious results, but we had a lot of miles left to cover. 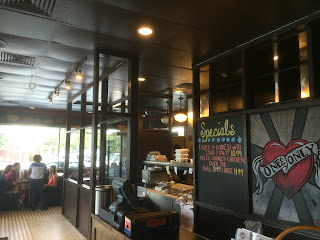 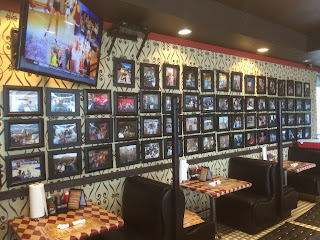 The wifey was still half asleep when I stopped for lunch, so we just ran in and snagged some quick carry out. Much like Liam Neeson in Taken, I have a very particular set of skills that I've acquired over a long career, except that while he's quite adept at murdering kidnappers, I'm just good at eating while driving. A sandwich probably would have been the appropriate to-go choice for the road, but I much prefer my barbecue in plate form.

Their combo options were limited to two- and four-meat platters, as opposed to my customary three-meater. The two-meat barbecue plate is pretty expensive at $16.99, so four meats would likely break the bank. I had briefly considered a two-meat combo that included ribs, but the $22.99 price tag quickly cured me of that notion. I settled for a 2 Meat Platter of sliced brisket and pulled pork, with deviled eggs and sweet potato fries as my side dishes. 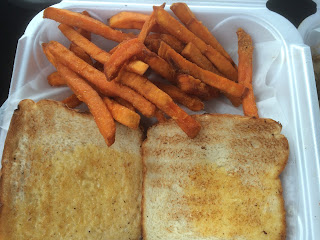 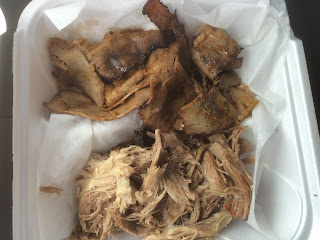 Potato salad is one of my standard side dish choices, but today I decided to live dangerously. Fries would also be easier to eat while I drove. These weren't overly crisp, and I actually don't think that sweet potato fries should be. They were cooked well and tasted homemade, although I can't be certain of that. Deviled eggs, which somehow eluded my picture-taking process, were another strategic driving choice. The eggs were creamy and mustardy, with just the right amount of salt and paprika and whatever other deliciousness they had sprinkled on top. There was also a slight sweetness that I really enjoyed. I doubt very many people besides me have driven around the Memphis ghetto while eating deviled eggs, at least I sincerely hope they haven't.

One & Only's pulled pork gets smoked over hickory for fifteen hours straight. That much time in the smoker was sure to produce fantastic results, which it did. Most of the meat had only a moderate, yet unmistakably-hickory smokiness. My plate contained only a few pieces of bark, but they were awesome and packed at least double the smoke level I had found initially. The meat itself was tender and very juicy, as well it should have been. No sauce needed here.

Rather than just being seasoning and smoked like most barbecue, their brisket gets marinated, smoked, sliced thin, and then finished on the grill with some extra seasoning. Honestly, I was a bit weary of the advertised thin-sliced beef, which can often be a devious way to counteract a pitmaster's dry meat. To my delight, the brisket was spectacular! It tasted like thin, smoky strips of steak, especially with the added steak marinade. I also loved the rub, which brought out even more flavor. The best way that I can describe it is that it's kind of like a barbecue/steak/shawarma fusion. Their thin slices also allowed me to wrap the brisket around my fork like spaghetti noodles, which was perfect for driving. This was clearly not a Texas brisket, but it was awesome nonetheless.

My wife, who ordered a pulled chicken sandwich despite my efforts to accommodate her barbecue apathy, said that it was probably the best she's ever had. That's certainly high praise coming from her, and I share her sentiment. I managed to eat my entire plate without making a mess of my clothes, except for the piece of pulled pork that I found later in my shirt pocket. Totally worth it.

A few weeks ago, I discovered a new purveyor of pulled pork near my house called Curley's Carryout. To be honest, I didn't exactly have high hopes for this carryout restaurant, but I decided to give them a shot anyway. Besides, investigating barbecue in all of its forms is why I began writing this blog in the first place. 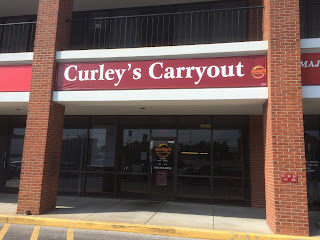 You'll find Curley's in a small strip mall, sandwiched between a dry cleaner and some sort of urgent care thing. Despite the "Carryout" name, there are in fact four small tables inside. There weren't many customers when I came in though, but Curley (the man himself) was extremely friendly and upbeat nonetheless. He also seemed to take pride in his food and the mom-and-pop nature of his business, which I always appreciate. 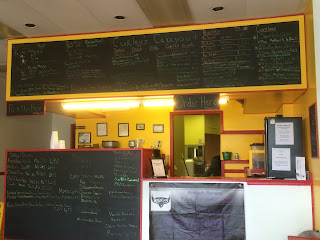 The menu I had seen on Yelp was mostly focused on burgers, hotdogs, and wings, with no plain barbecue as an option. I did see a "Pulled Pork Burger" and a "Pulled Pork Dog" that sounded interesting, but they were nowhere to be found on the in-restaurant menu. In fact, there were no longer any hotdogs on the menu at all. Luckily, I did find a decent combo: a pulled pork sandwich, 8 wings, and fries. Curley wasn't making smoked wings until Tuesday, and he was also out of the smaller wingettes, so I received 4 large honey barbecue wings. Not perfect, but it would have to be good enough. I upgraded my fries to their Garlic-Parm variety, which I was sure would be worth the small upcharge.

During my thirty-minute wait for food (it seems to be just a two-person operation), I was asked for my preferences on barbecue sauce. Normally I wouldn't even bother, but since I saw no evidence of an actual smoker anywhere, I feared that I might need the sauce today. I picked mild over spicy and Carolina-style over honey barbecue. Curley was nice enough to put the sauce on the side at least. 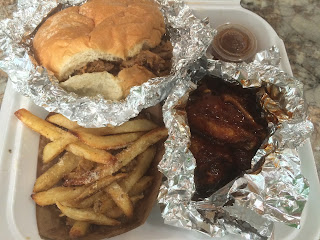 The handcut Garlic-Parm fries were fantastic! As their name suggests, this "Super Side" comes loaded with garlic and parmesan. They were crisp, flavorful, and infinitely better than the standard frozen crinkle fries. I should have ordered more of them.

Smoked wings would have been more my style, but I still looked forward to trying their honey barbecue version. These were coated in a thick layer of sauce, which was sadly a little bland aside from its pleasant sweetness. The wings themselves were cooked well and had a crispy skin. Maybe a sauce like lemon-pepper would work better, so I'll have to remember that for next time.

I tried to keep an open mind about the "pulled pork." The bun tasted homemade (well, homemade by someone), but the pork inside definitely had more of a crock-pot quality to it. There was a decent amount of flavor from their seasonings, though no smoke whatsoever. As expected, sauce was necessary here. It ended up being a runny vinegar-based sauce rather than the Carolina Gold I had hoped for. I liked it ok, but I'm just not a sauce guy no matter how hard I try to be.

Some of the toughest reviews to write are those which require me to balance the friendliness of small business owners with subpar barbecue. I will say that the burgers I saw coming out of Curley's kitchen looked as phenomenal as my fries had been, so perhaps that's really their forte. Curley's also has a great selection of homemade milkshakes, including salted caramel and a red velvet "cake shake" made with actual chunks of cake. I'll definitely be back to try those, but I probably won't be back for more barbecue.