My wife, being a Little Rock native, was certainly familiar with Burge's, although she thought that they mostly just sold smoked hams and turkeys and such. After all, their official name is "Burge's Hickory Smoked Turkeys & Hams." I made sure to file that knowledge away for Thanksgiving and/or Christmas, but I'm much more interested in other kinds of smoked meats. Luckily for me, Burge's also has a fair amount of barbecue on their menu. 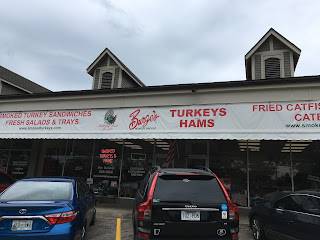 Burge's occupies a bright cafe-style space right in the midst of a small shopping center. The walls were adorned with an array of old soda and gas signs, as well as some obligatory Razorback decor. Looking around, most of the other diners seemed to be enjoying deli-style sandwiches, with no barbecue in sight. Oh well, their loss. 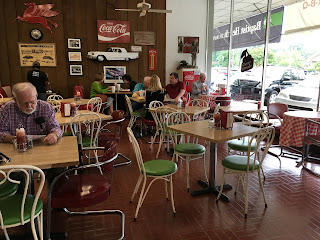 The order line was a little bit busier than I had hoped for, and it looked like some rain was headed our way. Neither of those things bodes well when you have an infant along for the ride, so I just got my food to-go. Burge's doesn't list any multi-meat barbecue plates on their menu, and if I hadn't been a little pressed for time, I might have inquired further just to be sure. I ended up ordering a pulled pork sandwich and a brisket plate with potato salad and beans. Their plates are actually served with beans and a choice of potato salad or coleslaw, in case you're some kind of crazy person who doesn't eat potato salad. 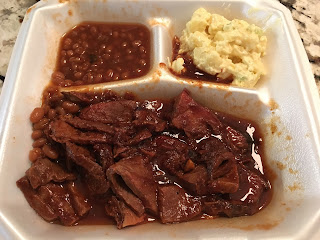 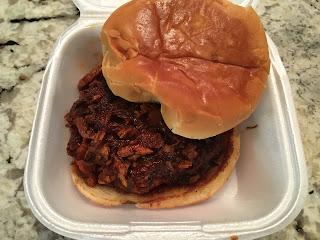 Some people say that you eat with your eyes first, and honestly, this plate of food made my eyes sad. The beans were lukewarm at best, and it only took me five minutes to drive home, so I doubt they cooled down that much in transit. They were reasonably sweet with good hits of acidity. A little added spiciness would have gone a long way here. My beloved potato salad was mostly mayo-based with some mustard tossed in for extra flavor. I kept wishing for more veggies, since without them the whipped potatoes lacked any real texture.

I was particularly dismayed with the brisket. Slices of what might have been awesome smoked beef were absolutely drowning in more sauce than any one human should safely consume. The meat was pretty tough to chew, even the fattier slices. I caught a little smoke here and there, but mostly all I tasted was the vinegar and tomato of the sauce.

The pork wasn't really any different than the brisket. My sandwich could have easily passed for a sloppy joe. Heck, it might as well have been ground up hotdogs for as much sauce was on there. It was also a bit confusing. Some of the pork was shredded, and some came in a big slice. The only meaningful difference between the pork and the beef was a slight spiciness to my sandwich. The pork was also more tender than the brisket had been, but it was still fairly dry.

Much as I hate to waste food, I ended up throwing away 90% of my lunch in favor of some chips and dip that I found in the back of my pantry. It's been a while since I've handed down a one-star rating. Maybe Burge's should stick to ham and turkey.

I wanted to go somewhere close and relatively easy for my first father/son barbecue outing. Quite a momentous occasion indeed, but going out to eat with a baby can be a real challenge when you're flying solo. Even though Terri-Lynn's Bar-B-Q didn't exactly get a ringing endorsement from my mother-in-law, it was very nearby and seemed like a good place to start. 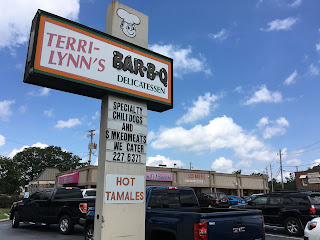 There really isn't a whole lot to Terri-Lynn's, inside or out. It's snuggled away in a rather run-down shopping center, and I probably wouldn't have even noticed it had it not been for the prominent placement of their signage. Furnishings consist of some old diner-esque tables and chairs, surrounded by a half-dozen booths which are at least as old. Random hog-themed knickknacks dominated the decor, to be expected in central Arkansas I suppose. There was also a rather large display of IBC root beer for some reason. Oh well, barbecue doesn't need to be fancy, and it usually isn't. 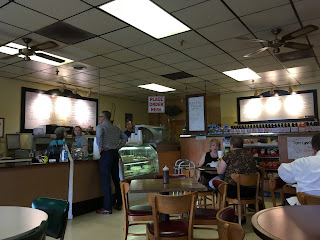 Terri-Lynn's barbecue dinner plates are only listed as one-meaters, with no combos in sight. I doubled up on some sandwiches instead. At least I could pretend that one of them was for my son, despite the fact that he's only nine months old. I grabbed a chopped pork sandwich plate with bbq beans and potato salad, plus a brisket sandwich plate with deviled eggs and macaroni salad. 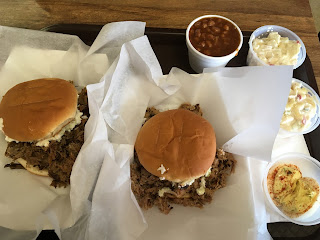 My sides of macaroni and potato salad were virtually indistinguishable, both in terms of taste and looks. Big hunks of pimento and a very creamy mayo base made their way into both salads, as well as more sugar than I care for. The beans were slightly spicy and very pleasant. In contrast to the mac and potatoes, they weren't overly sweet, which is definitely a good thing. The deviled eggs had a great visual appeal. Their nicely whipped filling was covered in paprika. I also found them somewhat zesty.

Like my side dishes, the pork and beef sandwiches looked eerily similar from the outset, largely because the brisket came chopped rather than sliced. I pinpointed the beef and tore in. It was very tender and very tasty, with good bark mixed throughout. There was a moderate smokiness to each bite, though some pieces were noticeably smokier than others. I missed out on the delicious brisket fat, likely an unfortunate byproduct of the chopping process, but I probably didn't need it anyway. I'm sure that my doctor would agree. Coleslaw added a nice crunch and a welcome sweetness to the sandwich, something you can't fully appreciate unless you get your barbecue sauceless.

The pork sandwich also had a nice helping of bark. It was even more well seasoned than the beef had been. Moist and juicy pork filled each bite I took, with hints of smoke evident as well. The smoke level was about on par with the brisket. I found the crunch of the slaw to be even more gratifying here, due to the pork's natural mushiness. The meat was a little crumbly for my liking, but that's really my only criticism.

If you're looking for a place with fabulous side dishes, then Terri-Lynn's Bar-B-Q Delicatessen probably isn't for you. Beans notwithstanding, of course. But what they lack in potato salad they more than make up for in meat. Terri-Lynn's is probably closer to a three-and-a-half star barbecue joint, but I don't do halfsies and I generally round up. Take that for what it is.