I seem to be on a bit of a barbecue shack kick lately. That's ok, these humble joints often have unexpectedly phenomenal food. Today's smoked meat adventure took me to H.B.'s Bar-B-Q down in south Little Rock. 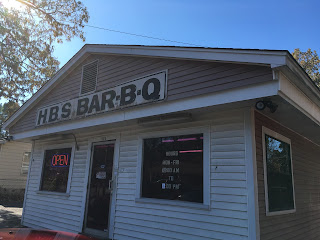 You'll find H.B.'s in a converted house smack dab in the middle of a residential neighborhood, where it's lived for over fifty years. The neighborhood is a bit sketchy, but there were quite a few signs inside and out which suggest that the owners and employees are all packing heat here. This place looked super old, from the wood-paneled walls to the country cow decor. Most of what I could see was also fairly dusty and grimy, especially the dish sink right behind their register. Frankly, I'm surprised that this joint passes health inspections. 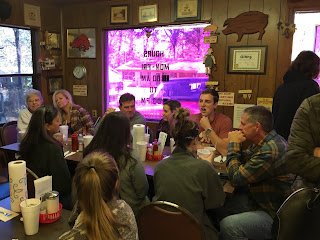 There's only a small dining room, packed tight with a dozen or so tables and chairs. To-go orders would be more advisable here, so that's what I did today. Even then it took forever to order, and I was only third in line. By this point my one-year-old was as visibly exasperated as the overworked cashier/waitress/owner (I think). So I made a snap decision to forgo any questions or any attempt at a multi-meat combo. Instead, I simplified things down to a pork and beef sandwich duo with a side of potato salad. If I'm being completely honest, neither of these sandwiches looked particularly appetizing. 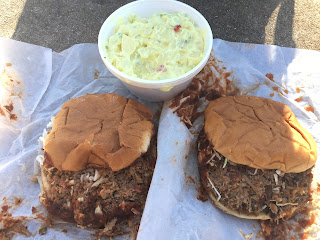 The potato salad was bright yellow, though less mustardy than I imagined. Pimentos didn't add much in either the flavor or the texture departments. It was creamy and tasty, but not my favorite.

I started the main course with the brisket sandwich, or at least the one that I thought was brisket. There was actually some nice charred bark mixed into the mass of chopped beef, with a nice crunch from the slaw as well. I found just a mild smokiness, but it was there nonetheless. The meat was also quite tender, although in its chopped form it would be hard not to be. The sandwich was only slightly sweet, less so than I expected given the heavy dose of sauce, which also happened to be somewhat spicy.

My pork sandwich came topped with slaw as well. The meat was juicy and tender, but chopped into oblivion and somewhat less seasoned than its beef counterpart. There was plenty of rosy bark beneath the surface at least. The sauce was poured on a little heavier here, such that that's pretty much all I could taste without really concentrating and focusing my tastebuds.

In retrospect, the sandwiches likely would have been much better without sauce, a request that I should have taken the time to make.

Six weeks is far too long to go without a barbecue outing. I wanted a place where my son and I could eat outdoors and enjoy some of the last remaining fall weather that Arkansas had to offer before things get cold. So we headed across the river to North Little Rock to check out Mick's Bar-B-Q. 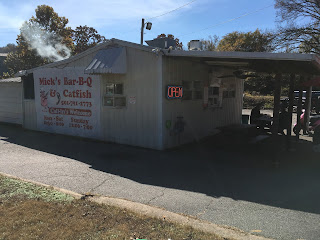 Mick's is quite the literal barbecue shack, with nothing more than a walk-up window, a drive-thru window, and four picnic tables under an awning. Luckily for us, that's all that we needed today. I ordered a combo of ribs and pulled pork, plus potato salad and bbq beans on the side. A three-meat combo would have been more ideal, but I take what I can get. 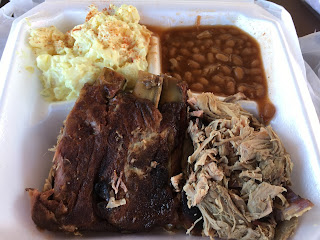 The beans were sweet and somewhat spicy, with a nice mix of flavors. They were also cooked well, not mushy at all. A dusting of paprika on top of the potato salad added to the visual appeal, but there wasn't enough of it to enhance the flavors any. The mayo base stood out here, and I liked the medium-dice on the potatoes.

I took my pulled pork without sauce, and honestly, it was a little dry. There was a pleasant smokiness and a good amount of seasoned bark at least. I ended up sampling their mild barbecue sauce out of necessity. It was thick and sort of ketchupy, so much so that the pork wasn't really any better with it than without.

The ribs came apart with the slightest nudge, and while some people naively prefer theirs to be "falling off the bone," it's suggestive of overcooked meat. There was a very mild smoke level here, and the crust was barely seasoned. On the other hand, the meat was very tender and super juicy throughout, so I suppose that's something to be thankful for.

I had high hopes for Mick's Bar-B-Q, which has great ratings across the Internet. Either somebody knows something that I don't, or standards for barbecue in North Little Rock are a bit low.