Truth be told, I had intended to try out Drifters BBQ a few weeks ago when I had the morning off from work, but I am sad to report that I lazily fell asleep on the couch instead. That's not really an excuse, just an explanation. Shamed by my slothfulness, I was determined to check Drifters off my list today. 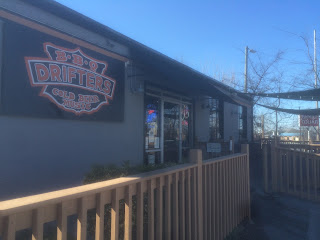 From the exterior, Drifters looks more like a hole-in-the-wall biker bar than a purveyor of smoked meats. The inside mostly mirrored my initial impression, except that it was much more inviting than I assumed. Located right in the heart of Nashville's booming Five Points neighborhood, I'm sure that Drifters gets packed once happy hour rolls in. 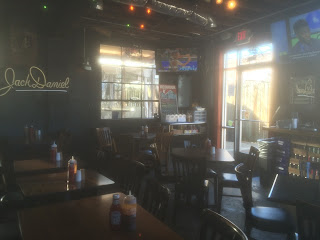 When I ordered a sweet tea to quench my thirst, I was immediately asked, "How sweet?" God bless the South. Despite my amazement at seeing over half-a-dozen vegetarian options on Drifters' menu, I suppose that's probably a smart move given the changing demographics in East Nashville. Vegetables aren't really my thing, so I opted for their Hickory Smoked Sampler Platter: a third-rack of ribs, and three ounces each of pulled chicken, brisket, and smoked sausage. This bad boy also comes with baked beans, coleslaw, and fries, though I humbly subbed in hushpuppies for the slaw. I do wish they served pulled pork with this sampler instead of poultry, but c'est la vie. 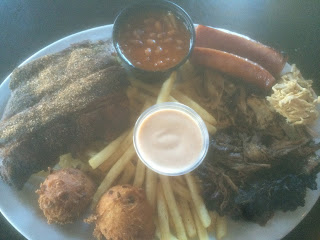 The beans were somewhat sweet, but not overly so. I don't particularly care for mushy beans, so I was delighted to find these perfectly al dente. Drifters' fries were fairly standard, although I loved the seasoning blend dusted on top. It gave things a really nice zip. The hushpuppies were the standout winner of my side dishes. Their beautiful, golden crust had a great crunch and was equally tasty. Some hushpuppies can be a bit on the dry side, but these were fluffy and delicious. I also liked the slight spiciness to them, which was even better with the accompanying remoulade.

Not surprisingly, the Texan in me was expecting sliced brisket, but sadly their beef comes shredded. Even so, there was plenty of scrumptious bark to go around. The meat had great flavors from the marinade and a decent smokiness to boot. It was also very tender, which I always appreciate. The brisket wasn't quite what I hoped for, but pleasant nonetheless.

My split-face sausage link was regrettably store bought, though I didn't really anticipate housemade sausage at Drifters. It did have a nice sear from the grilltop, but no real smoke that I could taste. I did, however, thoroughly enjoy dipping it in the hushpuppy remoulade. Perhaps they should just make that their standard pairing for the sausage.

There was much more flavor in the chicken than most of the smoked poultry I've tasted. It was tender and not at all dry. The chicken had only a modest hint of smoke though. I did receive a good mix of white and dark meat, but personally I find dark meat to be the juiciest, and therefore best part of the bird.

Dry-rub ribs were just what I wanted, and Drifters delivered in spades. The rub was sweet and spicy at the same time, giving each bite an interesting flavor profile. I think that the mild smokiness also allowed the spices to stand out even more. The ribs had been cooked a little longer than I would have liked, yet still not quite falling off the bone. The flavors definitely made up for any texture issues though.

Drifters may not be one of the usual barbecue stops for Nashville tourists, but it definitely should be.