As you might expect, seafood is by far the main draw in and around Destin, Florida. But there is some good barbecue to be found in that area as well, and my favorite spot has been Buck's Smokehouse. Sadly, as we rolled into town for our annual family vacation, my eyes became a little teary at seeing that Buck's was no more. In its place now stands the sixty-second location of Moe's Original Bar-B-Que. I have a general disdain for chain barbecue, and in my experience it's rarely more than mediocre. That said, I haven't tried Moe's before, and I'm always willing to give a barbecue joint a fair shake, no matter how big or how small. 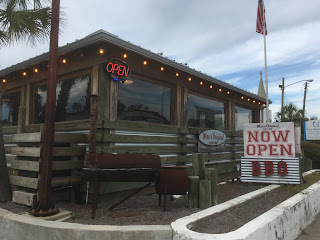 We asked the girl at the counter what happened to Buck's, since this appeared to be a fairly recent change. She looked a little hesitant to answer, and simply said, "Buck decided that he didn't want to have a restaurant anymore. He's been trying to sell it for a while." I'm not sure that I completely buy that explanation, but it is what it is. Everything here is nearly identical to Buck's, except the name and the menu. I took a picture for posterity's sake, although I probably didn't need to. 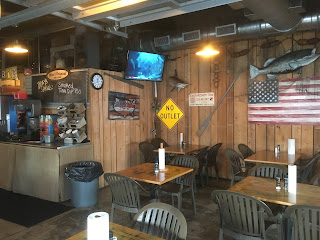 Moe's has no multi-meat combos to offer, not even on their large family packs. They also don't serve brisket. This wasn't my first rodeo with that sort of menu, and unfortunately it probably won't be my last. I ended up going with a pulled pork platter and adding two a la carte ribs and three wings to the mix, plus potato salad and fried green tomatoes as my two sides. 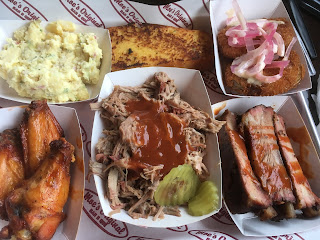 The potato salad was kind of a mashed potato type, but it did have a nice crunchy texture throughout from all of the veggies. I also liked the red onion. There was plenty of mustard to go around without being overpowering. My two big fried green tomatoes came topped with pickled red onions and some sort of remoulade. The crispy batter and tangy tomatoes were a nice compliment, but truth be told, the pickled onions had much more flavor than the tomatoes.

I had requested sauce on the side of my pulled pork, but that apparently went ignored. I found some pieces with no sauce, and they were fairly bland and a little dry. There also wasn't much smoke that I could pinpoint, and not much seasoning either. The sauce seemed like the main flavor component here, which is just sad. Even though I did enjoy their semi-sweet barbecue sauce, it wasn't enough to salvage things.

My wings had a super crisp skin with a nice char as well. There was a lot of seasoning and a slight spiciness in each bite of the tender, smoky chicken. I really, really liked these, and I wish that I had gotten more than just three, especially given the disappointing pork, most of which stayed put on my plate.

The ribs came with a drizzle of the same sauce as on the pork, and it appeared to be the main source of flavor here as well. The overcooked pork ribs were somewhere between a baby back and a KC spare rib in terms of size. I found them dry and a little chewy, with only a moderate smokiness. There also wasn't any real crust to speak of.

I also snagged a kids smoked turkey plate for my little buddy, with macaroni on the side. His mac was of the basic elbow variety, with cheese that was sort of half melted, half not. As my wife put it, "There are some greasy, crusty parts." Pretty much it in a nutshell. The side of cornbread was really tasty, but why you would put jalapeño cornbread on a kids plate is beyond me. My son couldn't spit it out fast enough. Gee, thanks. His turkey was decently smoky and pretty tender. It was also seasoned well, so I suppose that's some consolation.

This photo perfectly sums up Moe's. 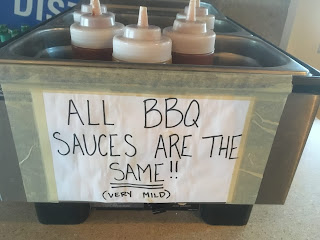 All the same, and very mild. Couldn't put it better myself. Buck's Smokehouse was really spectacular, especially their mouth-watering brisket. Moe's Original Bar-B-Que, in contrast, was just average. I guess when you have sixty-two locations, "just average" is enough to turn a profit, so why waste your energy doing better? And that's why I loathe chain barbecue.