I had a college buddy in town this weekend, and we needed a good lunch spot to watch some March Madness games and knock back a few cold ones. Neither of us were really in the mood for a traditional sports bar, so that made things challenging. My first thought: Edley's. I've been to Edley's original 12 South location, but I really wanted to check out their newer Edley's East spot for a little compare-and-contrast. Plus, it was a great way to show my buddy how much East Nashville has changed since our college days nearly a decade ago. 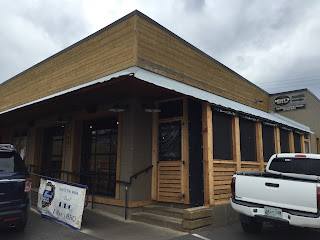 The place was absolutely packed at 12:45pm with a few boozy stragglers left over from brunch. There was a fairly long line, but it wasn't a horrible wait by any means. Edley's East has a great atmosphere. It's lively and welcoming, yet it doesn't seem to embody all of the hipsterness that's common to East Nashville. I especially loved all of the natural woodwork, which is a hallmark of Edley's original locale as well. 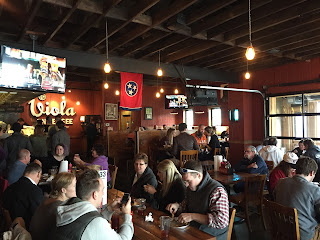 After the big bowl of Captain Crunch I had for breakfast, I probably didn't need an appetizer, but I couldn't resist an order of their BBQ Nachos with pulled pork. 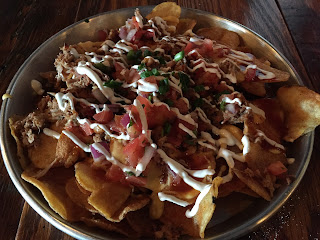 In addition to the pulled pork, these BBQ Nachos were loaded to the brim with pico de gallo and cheesy goodness. Every part was delicious in its own way. The pulled pork was smoky and fantastically tender, and it had just the right amount of simple salty seasoning. I really enjoyed how the spiciness from the jalapeños offered an interesting juxtaposition with the gooey cheese and sour cream. There was just a drizzle of sauce across the plate, which added a nice accent as well. Best of all, the thick-cut homemade potato chips were a perfect substitute for the usual blasé tortilla chips.

With my palate thoroughly warmed up, it was time for the main event: the Brisket Platter with cornbread, grits casserole, and black eyed peas. Heck yeah! 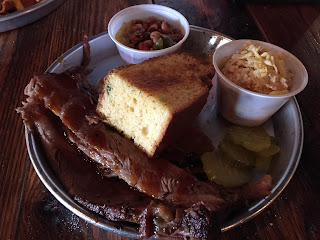 Every one of my side dishes had a layer of spiciness hidden within. The cornbread was toasty and buttery. It was also quite dense, but not the least bit dry. Jalapeños were sparsely scattered throughout, though just enough to add some good zip. Black eyed peas are one of the most Southern sides you can find, and these were quite tasty. I really liked the peppers mixed in, both the sweet and the spicy variety. The grits were the best of all. They were fiery and delicious. I found a great crunch from the added crumble, which paired well with the otherwise creamy texture.

The brisket was beautifully smoky, and the midnight-black bark was absolutely packed with flavor. There was also a prevalent smoke ring that matched the taste. Well-rendered fat made each bite melt in my mouth, and the meat itself was also very tender. The sauce was nice and tangy, but didn't mask the natural beefiness. In short, the brisket was phenomenal.

As much as I enjoyed my meal at the original Edley's, I think the barbecue at Edley's East might be even better.