I had originally brought some Thanksgiving leftovers for lunch today, but after staring at a computer screen for nearly four solid hours, I was in desperate need of a change of scenery. Given the exceptionally pleasant fall weather, I moseyed on over to The Row to see what sort of meaty deliciousness I could scare up. 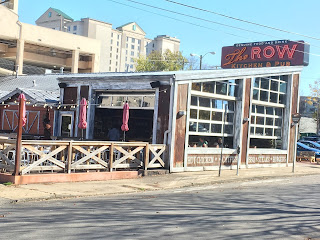 The Row has a fantastic atmosphere that's a blend of rustic and modern. Everything has sort of a reclaimed barnwood feel to it, but without going full-on farmhouse sheik. It's essentially the restaurant version of a house on HGTV's "Fixer Upper," except instead of shiplap or an open-concept kitchen they've got a bar, a sound stage, and an immense patio. There is also a large indoor dining space if the elements are being uncooperative. 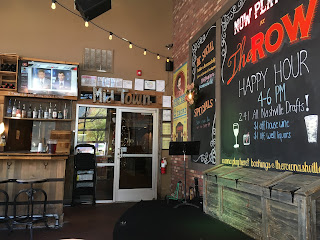 I have a weakness for deviled eggs, so there was no way I could resist their Deviled Eggs 5-Way appetizer! These eggs each come with their own homage to Southern cooking: pimento cheese, chow chow, bacon, dill pickle, and spoonfish caviar. Not having the slightest idea what a spoonfish was, this one took some research. Apparently the caviar is harvested from paddlefish, the term "spoonfish" being merely a nickname of sorts. They're native to the Mississippi River basin, making them about as Southern as chicken fried steak, if not just a tad bit unconventional. 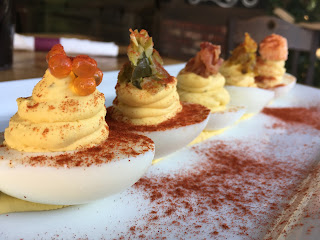 The pimento cheese was creamy and decadent, with a distinct cheddarness to it. I'm not entirely sure that I've actually eaten chow chow before, but I am sure that I enjoyed the sweet acidity of theirs. The crisp, salty bacon was everything that you'd want it to be, and the dill pickle had a nice crunch coupled with pleasantly pungent hits of vinegar. As for the infamous spoonfish caviar, it was much saltier than I would have imagined, and I liked it a lot.

For the main course, I couldn't decide between a pulled pork plate or a brisket plate, so I did the only logical thing and asked for an off-menu combo. Thankfully, they were happy to oblige. Their plates automatically come with a spicy corncake and slaw, as well as one additional side. I picked the bacon mac and cheese for fairly obvious reasons. 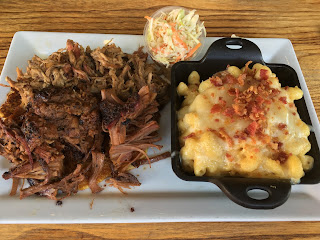 Wow, this was definitely not basic box macaroni. The small cast iron dish allowed the sides to crisp up a little, and the layer of melty cheese right on top was a great bridge between the gooey spiral pasta and the crispy crumbled bacon. This dish was savory, comforting, and absolutely scrumptious. The corncake was surprisingly fluffy and moist, with a good balance between sweet and heat. It was an excellent pairing for barbecue.

My rough-chopped brisket was tender, juicy, and perfectly smoky. I found nice pieces of fat, bark, and rosy smoke ring mixed throughout, which enhanced the flavors and the smokiness at every turn. The well-rendered fatty pieces absolutely melted in my mouth, as God intended. There was just enough seasoning to be interesting without overpowering or masking the natural meat flavors.

The pulled pork was even more juicy than the brisket had been, at least compared to the non-fatty pieces of beef. It had a more tempered smoke level, which is about par for the course with pork. The chunks of bark that I found did pack more of a smoky punch, and they seem to have carried more of the seasonings as well. Although the pork certainly didn't need any sauce, I gave the Alabama White a twirl anyway. It was creamy and zesty, which complemented the pork nicely.

Admittedly, I went into The Row expecting to find a three-star barbecue lunch, four stars tops. But when I looked back through my notes, I realized that I couldn't find any criticisms to justify anything less than top marks. Color me impressed. 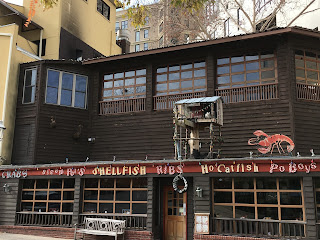 South Street is, at most, a ten-minute stroll from my office building and an equally short hop from the Vanderbilt University main campus. They've apparently been in operation since 1991, but even as a Vanderbilt undergrad in the early 2000s, this place somehow stayed off my radar. Better late than never, I suppose.

Judging by the scene outside, part of me was expecting sort of a Joe's Crab Shack vibe, but there was surprisingly little vibe of any kind to speak of. It's basically just a combination of unpainted shiplap and red brick, with not much else in terms of decor. Although, there are a couple of random trees and a treehouse running right through the main entrance, which I guess counts for something. 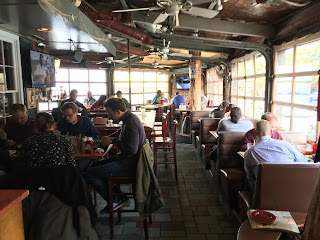 They have a Smokehouse Trio combo plate available, but not being in the mood for sausage, I went all-in with the BBQ Half Feast: a half-pound of pulled pork, a half-rack of ribs, and a half-chicken with two sides, for which I picked Cuban corn and homemade tater tots. Clearly there would be some leftovers coming out of this lunch, or at least there should. The phrase "my eyes were bigger than my stomach" doesn't even begin to describe the enormity of this plate. 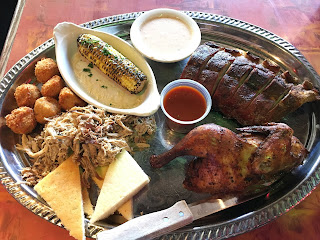 The automatic jalapeño cornbread was commendable. It was only slightly spicy, but not the least bit dry or crumbly. Their Cuban corn was charred beautifully. It came topped with a sprinkle of cilantro and cojita cheese, in true street corn fashion. Of my side dishes, the homemade tater tots were the clear front-runner. The crispy panko batter and creamy potato interior blended together nicely, almost like a potato croqueta.

South Street smokes their pork over hickory, after which point it's pulled by hand. My helping had plenty of bark mixed in, as well as a nice smoke level throughout. There were also hints of vinegar from the mop sauce. It was decently tender, with only a few moments of dryness. The pork was admirable, but with room for improvement.

The Chicken is pumped with South Street's secret blend of seasonings, then smoked. I found a tasty blend of spices on the skin (my favorite part!), and the meat beneath was definitely juicy. A mild smokiness was about what you'd expect for barbecue chicken. It comes with a side of Alabama white sauce for dipping, and although it wasn't really necessary, this spicy sauce certainly jazzed things up a bit.

Their ribs come dry rubbed, which I generally prefer to sauce. They could have used much more seasoning though, such that I wouldn't really call it a true dry rub. These bones also weren't quite as juicy as I would have liked, but they were undeniably smoky. The crust was a little overly crisp, like bacon that's been cooked too long, perhaps from finishing on the grill or in the broiler. Overall, the ribs were ok, but fell short in a few key areas.

I'm glad that I finally discovered South Street. Things were a little hit or miss, but I enjoyed my meal enough warrant a return trip. A word to the wise though: If you are dining alone and order the massively excessive Half Feast like I did, be prepared to get a lot of judgmental stares from the other customers. Don't worry though, they're just jealous.