A few weeks ago, my wife gave me the morning off from stay-at-home-dad duty, with explicit instructions to leave the house and go scratch my barbecue itch. Unfortunately, the weather wasn't quite as cooperative, and with sleet coming down I decided to stay put. Today, however, the skies were clear for the annual B Street Rib Off across the river in North Little Rock. 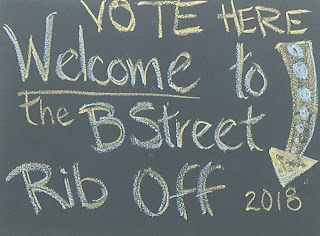 There wasn't much specific info about what to expect from this event aside from the obvious cook-off part. I knew there were supposed to be food trucks, but which ones in particular I'd just have to wait and see. The amateur barbecue cook-off benefits the American Cancer Society of Central Arkansas, with competitors simply taking home bragging rights and the inherent satisfaction of philanthropy, since 100% of the proceeds go to the local ACS chapter. 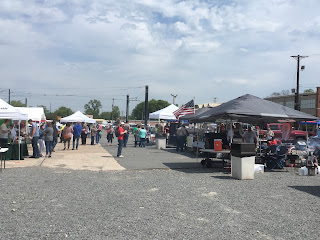 Well, having Disney on Ice only a half-mile down the street made getting to this event a freaking princess-filled nightmare. Once my son and I arrived, there were no food trucks anywhere, and nothing really for kids to do despite the advertised "family friendly" nature of the cook-off. Great, just great. Luckily, I've been doing the dad thing long enough to have packed some chicken, cheese, and applesauce for my little guy just in case, so he ate his lunch in the stroller as we walked up and down Main Street. 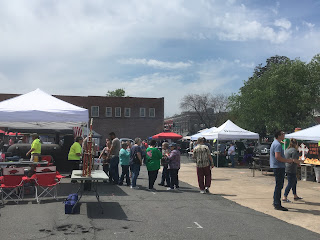 Then, by the grace of the barbecue gods, the "People's Choice" sampling started up at 11:30am instead of the scheduled noon time. Not one to look a gift horse in the mouth, we went in for twenty minutes, and I shoved as much meat in my gullet as my toddler would allow. I found quite the motley assortment of barbecue, as well as other things approximating barbecue.

Boston butt "nuggets" and pork tenderloin were both a tad dry. I got some jambalaya that was very tasty but seemed out of place in this setting. The brisket was juicy, though a little too much like pot roast for my liking. The pulled pork egg rolls were awesome and had an excellent flaky wrapper. I wish I had also tried the kind with coleslaw for some added crunch. Bologna and sausage were both seasoned well, and I thoroughly enjoyed the smoked cheese. I also found room for some sweet peppers stuffed with cream cheese and Italian sausage. The pork belly really hit the spot, as it always does. Nicely charred bacon-wrapped watermelon rind was one of my definite favorites, but in the end I gave my "People's Choice" token to the Blind Mullets team for their spicy smoked chicken wings with Alabama white sauce. They had a magnificently crispy skin, blackened nicely from the pit, and the creamy white sauce tempered the heat nicely. Superb.

I sincerely apologize for the lack of food pictures in this post, but once the sampling kicked off my fingers were too full of meat grease and toddler spit to risk handling my phone. Getting outside and spending the day with my son is always worthwhile, I'm just sorry that it was so much of a struggle this time. It wasn't until the very end of our morning that things seemed to start going according to plan, although I suppose that's often what makes an adventure worthwhile.