I always see Bread of Heaven Bar-B-Q's rather stationary food trailer at inopportune times, like when I've already eaten or when I have firm lunch plans. Today, however, I had the day off and no one to answer to except my seven-month-old baby. Since he was the only one of us who wanted carrots and pears for lunch, I decided to treat myself to some Memorial Day barbecue. 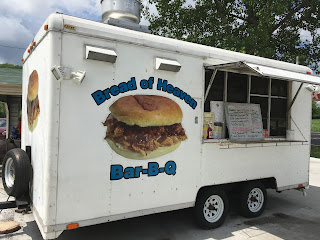 From what I can tell, this food trailer started out in Knoxville, Tennessee and migrated to Nashville a couple of years ago. You can normally find Bread of Heaven down in Antioch at the corner of Murfreesboro Pike and Mt. View Road. I don't know if they have any sort of regular days or hours, I just know that I've never seen the trailer parked anywhere else. That corner is pretty visible real estate, so I can't blame them for staying put. Location, location, location.

Since I hadn't eaten any sort of meaningful breakfast, I loaded up with a pulled pork sandwich, a half-rack of ribs, and sides of potato salad and baked beans. I couldn't see anything at all on the other side of the trailer's thick black window screens, so I just had to have a little faith and hope for the best. 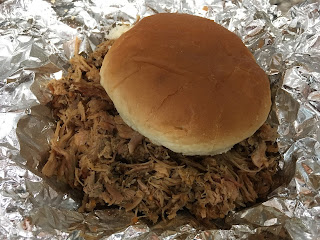 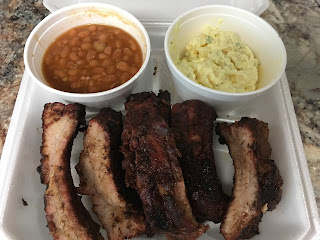 The beans were sweet, but not overly so. There was also a good mix of onion and peppers in each bite. A welcome change from standard baked beans, these were very enjoyable. Bread of Heaven's potato salad was creamy with medium-diced potatoes. The base was a nice mustard/mayo combination, with a pleasant crunch of pickles here and there.

I assumed that there would be a bottom bun beneath my massive pile o' pork, but I wouldn't know for sure until I dug in. There was no point in even attempting to eat this like a sandwich, so I took the bread as more of an accompaniment and opted for a fork instead of my hands. I was instantly taken aback by the remarkable smokiness, way more than I had expected. The pork was tender and decently juicy, and it was just salty enough to be interesting. My portion came without any bark, but there were plenty of other flavors to go around even without it.

The small baby back ribs were actually loaded with tender, succulent meat. Bread of Heaven's well-smoked pork came off the bone cleanly with the appropriate effort. I noticed a rosy smoke ring just around the edges of each rib, while each bite produced a good burst of smoke. There was also a nice seasoning on the deep burgundy crust, although I wish it had been a little crispier. I was getting full halfway through my rack, but the ribs were so tasty that I was able to power through to the end.

My order came with several cups of barbecue sauce on the side, but I couldn't possibly fathom a need for it. Their meat was spectacular all on its own! Needless to say, Bread of Heaven Bar-B-Q surpassed my expectations and then some.

Truth be told, The Pie Wagon was not my first choice for lunch today. But when life hands you lemons, throw them away and eat barbecue. This cafeteria-style "meat and three" only has pulled pork on Thursdays, with its normal meat offerings looking more like chicken fried steak, pan fried catfish, meat loaf, and salisbury steak. Since the place has been open in one form or another for just shy of a hundred years, I thought I might as well give The Pie Wagon a shot. 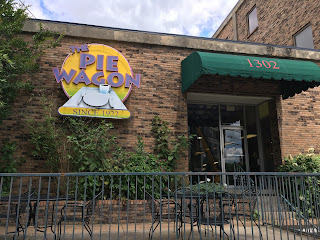 From the outside, The Pie Wagon looks like a sleazy old nightclub. On the inside, it looks like a sleazy old cafeteria. At least there's a little consistency there I guess. As close as this restaurant is to booming areas of Nashville like Vanderbilt University, Music Row, and the Gulch, The Pie Wagon seems as though it hasn't gotten a facelift in decades. Sadly enough, the restaurant moved to its current location a mere fifteen years ago, so I guess the "1970s charm" was intentional. I think going back to The Pie Wagon's original trolley car version from the twenties would have been a much better choice. After all, hipsters love retro. 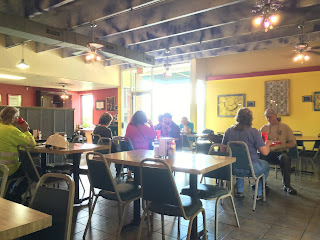 I went with The Pie Wagon's classic "meat and two" option with smoked pulled pork, green beans, and mac and cheese. I could have added on an additional meat and gotten more side dishes, but honestly not much else looked appetizing enough. Their plates also come with your choice of bread, for which I picked the jalapeño cornbread. 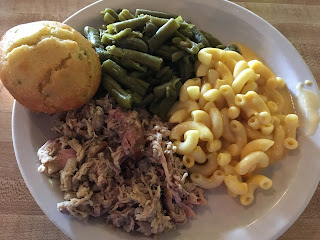 My cornbread was a tad on the dry side, but otherwise was pretty tasty. I found actual corn kernels scattered about, plus the unmistakable fire of jalapeños. The pan of mac and cheese that I saw in the serving line had a good burnt cheesy crust on it, yet somehow none of that made it into my helping. It was run-of-the-mill elbow macaroni and cheese sauce of the Kraft variety. Sadly, the green beans tasted about the same. They could have easily been dumped out of a can, and although there was a nice saltiness to them, there were no other noticeable flavors. I'm not suggesting that The Pie Wagon can't use canned side dishes as a base to start with, but for crying out loud add some boiled bacon and onions to the green beans so customers can at least pretend they're eating homemade food. I don't know for certain whether their sides were homemade or canned, but you would be hard pressed to tell the difference.

The pulled pork was a little watery for my liking, likely a byproduct of hanging out in the warming pan for a little too long. It was tender though. There were slight vinegar overtones to be had, and every now and then I caught a faint hint of smoke, but there wasn't a lot of either flavor to go around. I didn't see any bark at all, not that I really expected to find any here. Barbecue sauce probably would have helped I suppose. It wasn't the worst pulled pork I've eaten by any means, but it wasn't exceptionally good either.

Overall impression, The Pie Wagon struck me as the sort of place you'd take your grandma for lunch if you just needed to feed her but didn't really care whether she enjoyed her meal or not. Well, at least it was only $10.00.