I've driven past Shorty Small's every time we have come to Little Rock to visit the in-laws, but the group consensus for dining out is typically in favor of Whole Hog Cafe or Larry's Pizza. As much as I love our usual eateries, I was itching to try someplace new. On this trip I managed to coax us out of our comfort zone and into Shorty Small's. 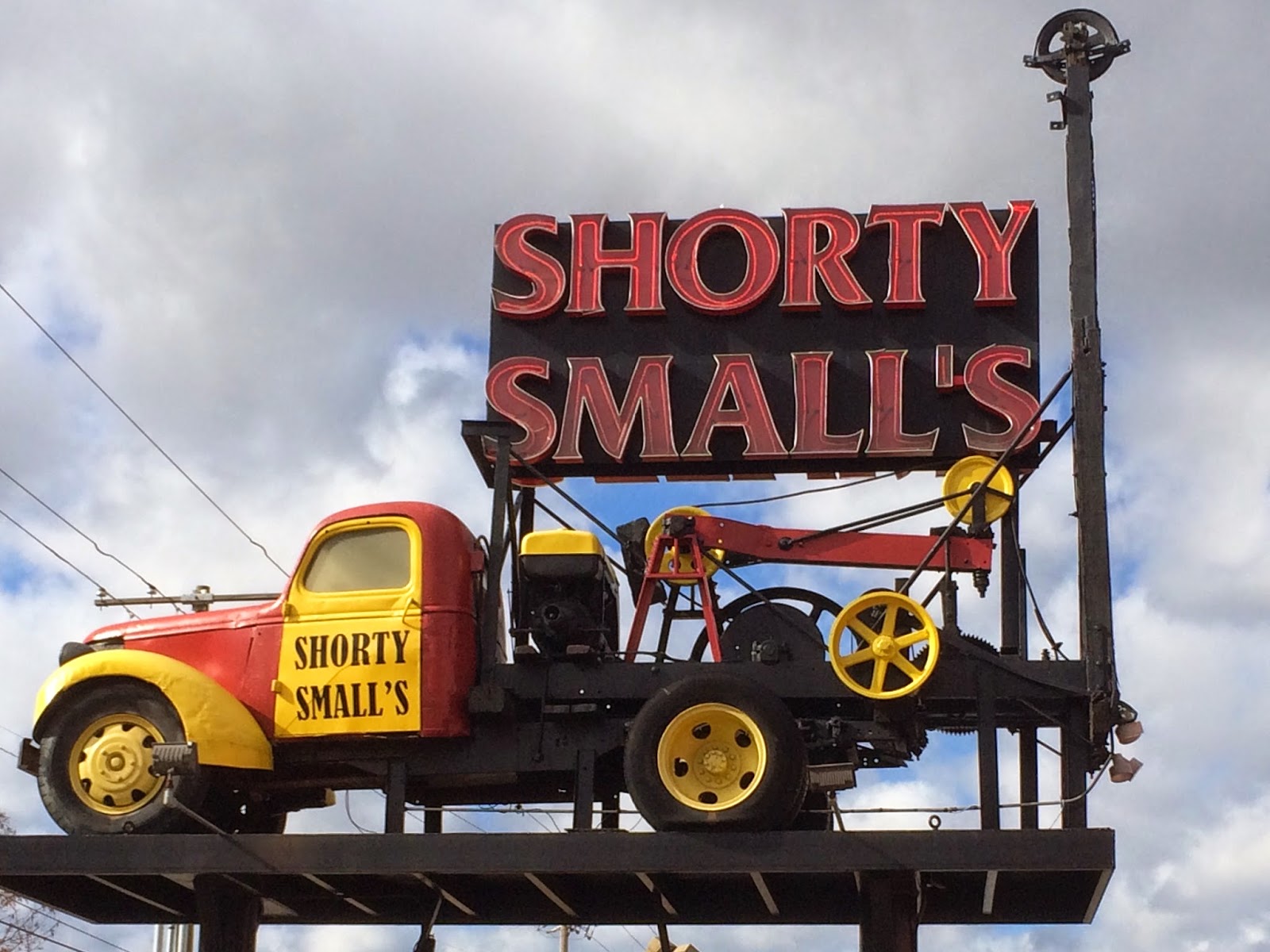 Whoever decorated Shorty Small's seems partial to garage sales and flea markets. This place is more along the lines of a TGI Friday's or a Chili's rather than a true barbecue joint, but it seemed worth a shot nonetheless. The interior was dimly lit, covered in wood from floor to ceiling, and all in all a little divey. For some unknown reason, their menu is in the form of a newspaper. In terms of ambiance, the only saving grace was a small gameroom with a skill crane and Street Fighter. 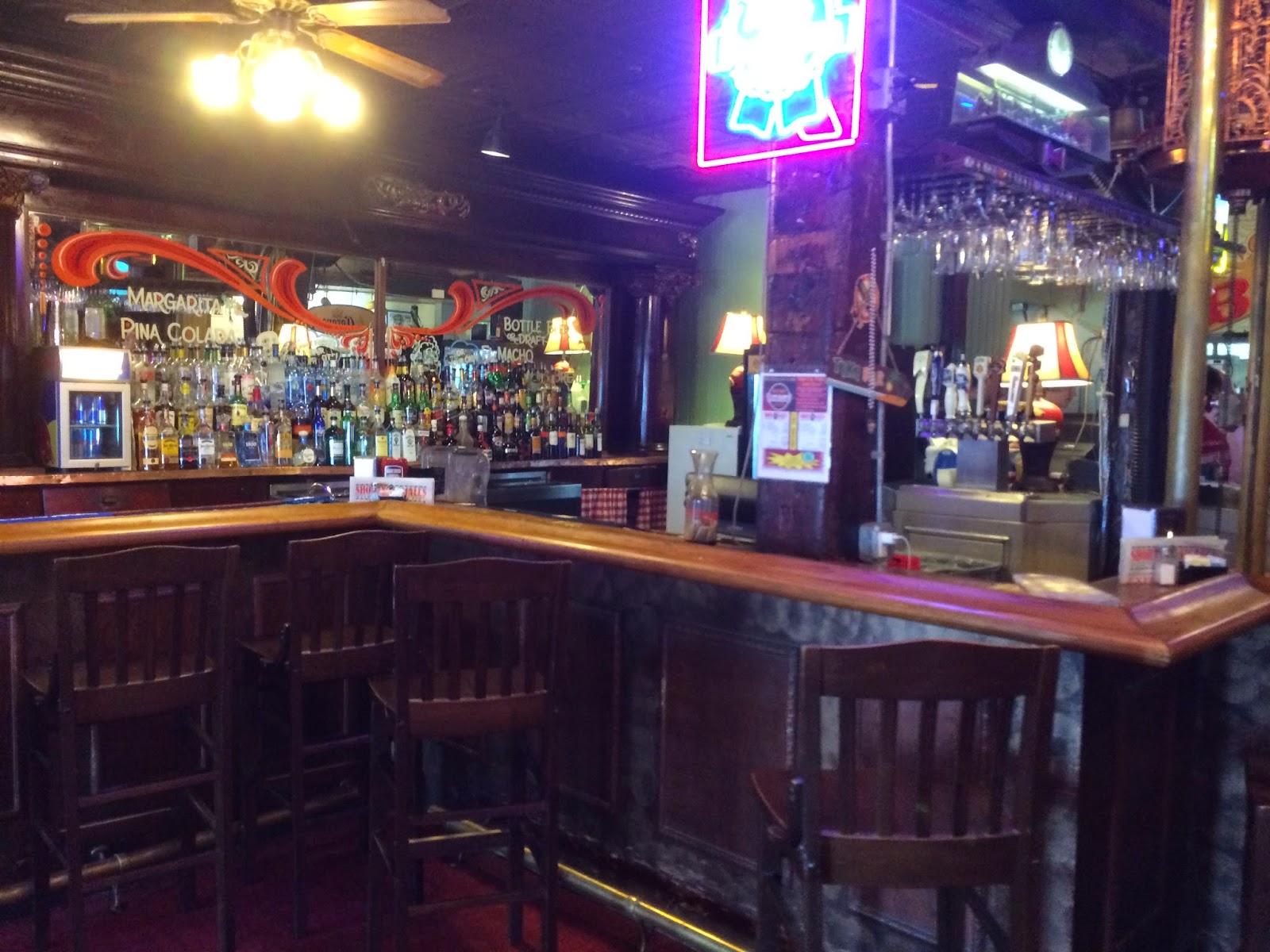 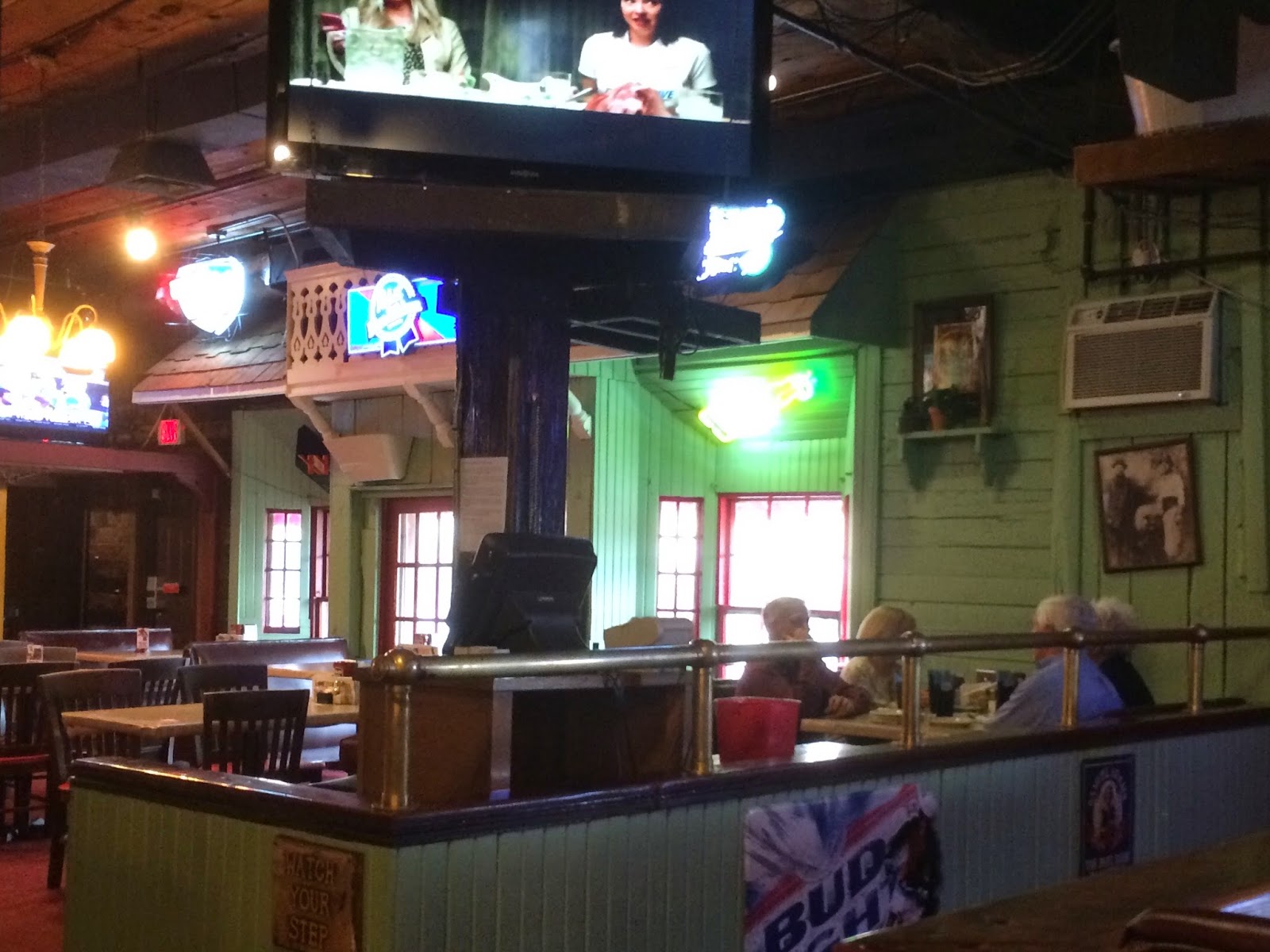 There were several barbecue combos on the menu, but nothing beyond a two-meater. I picked their Ribs and Brisket Combo, which the menu describes as "shorty's favorite combination! jumpin' off-the-bone tender. ribs and bbq brisket served with all the fixin's!" According to our waiter, the default "fixin's" consist of coleslaw, beans, and fries. I politely requested loaded mashed potatoes instead of slaw and also asked for my sauce on the side. Potato salad would have been my first choice for a substitute, but it was nowhere on the menu. Oh well. 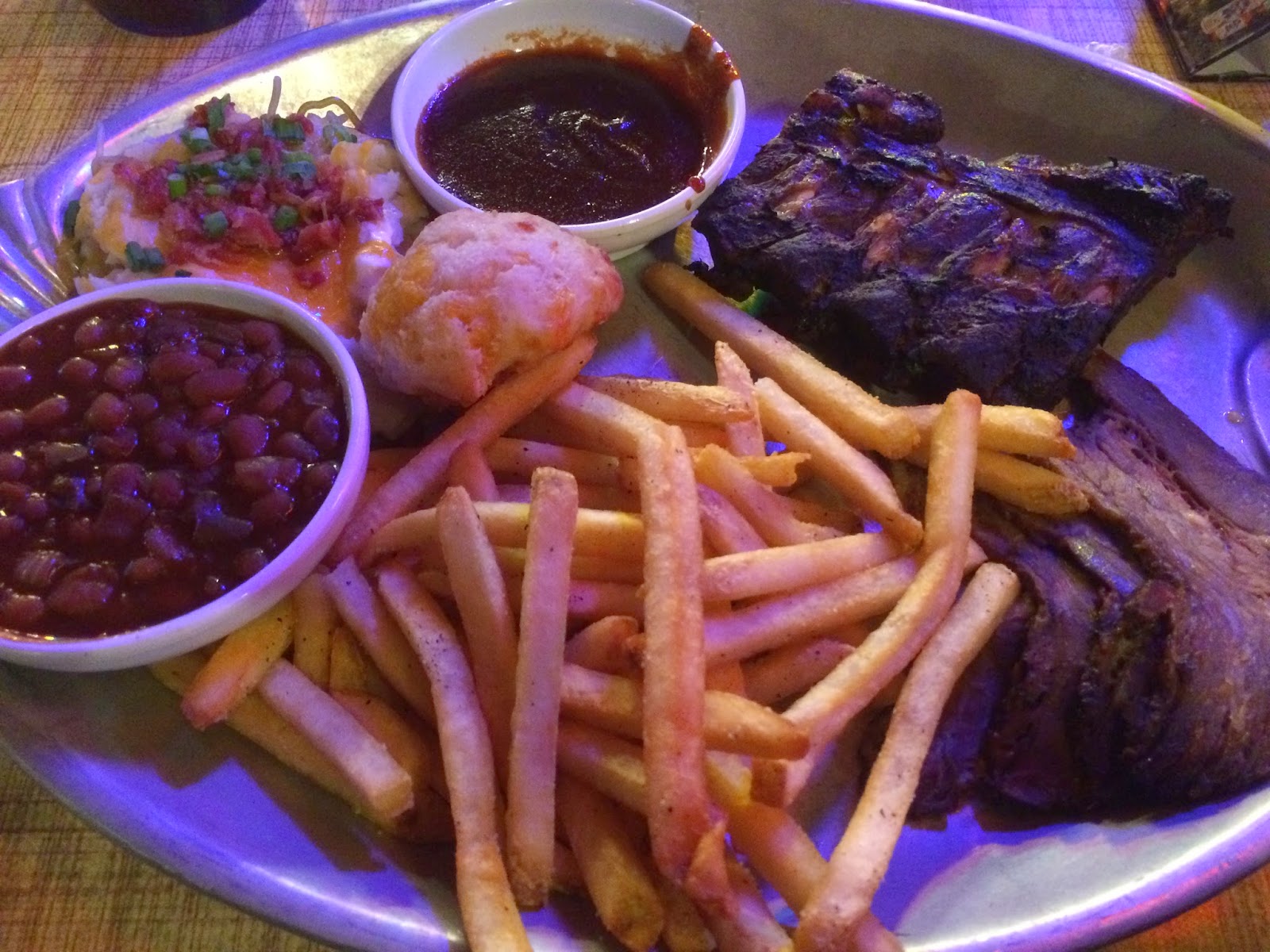 My combo ended up being an absolutely huge plate of food, the majority of which was non-meat. The loaded mashed potatoes were quite good. They tasted like a baked potato for all intents and purposes. The seasoning was decent, but nothing exotic. My baked beans were pretty basic. Aside from the onion and a very slight spiciness, they were sort of bland. The fries were of the standard frozen variety and not worthy of further description.

The brisket came sliced razor thin, with no bark or smoke ring to be found. In my opinion, such thin slices are much better suited for a sandwich than a knife and fork. I could taste only minimal smoke, but at least I could taste it. The brisket was decently tender, so I suppose that's something. These slices weren't exceptionally fatty, although they weren't particularly thin either. I tried it with the sauce, which was way too thick and incredibly artificial, like bottled Sweet Baby Ray's or KC Masterpiece.

As advertised, the rib meat was somewhat falling off the bone, but I was pleased to find a little remaining bone retention. The crust was decent enough, and there was a nice char as well. I couldn't pinpoint any visual signs of smoke. The meat was juicy enough, but it could have been a little more tender. Like the brisket, the ribs were only minimally smoky. I did, however, enjoy the slight sugary aftertaste from the glaze.

I'm sure the enormous portions are how they justify making this a $17.00 entree, but I would rather have a smaller portion of better food. Shorty Small's wasn't world class barbecue, but it was somewhat better than I anticipated. On Tuesdays they have $5.00 off of ribs and $1.00 Pabst Blue Ribbon drafts, which I suppose might be worth coming back for.

After several months of being cooped up on a temporary house-husband gig, I desperately needed a change of scenery. Papa Turney's Old Fashion BBQ (I'm pretty sure there's an "ed" missing somewhere, but I digress) isn't too far from my house, so I thought I'd give them a try. That way I could indulge my inner barbecue lover and still make it back home in time to do a few loads of laundry. Sigh. 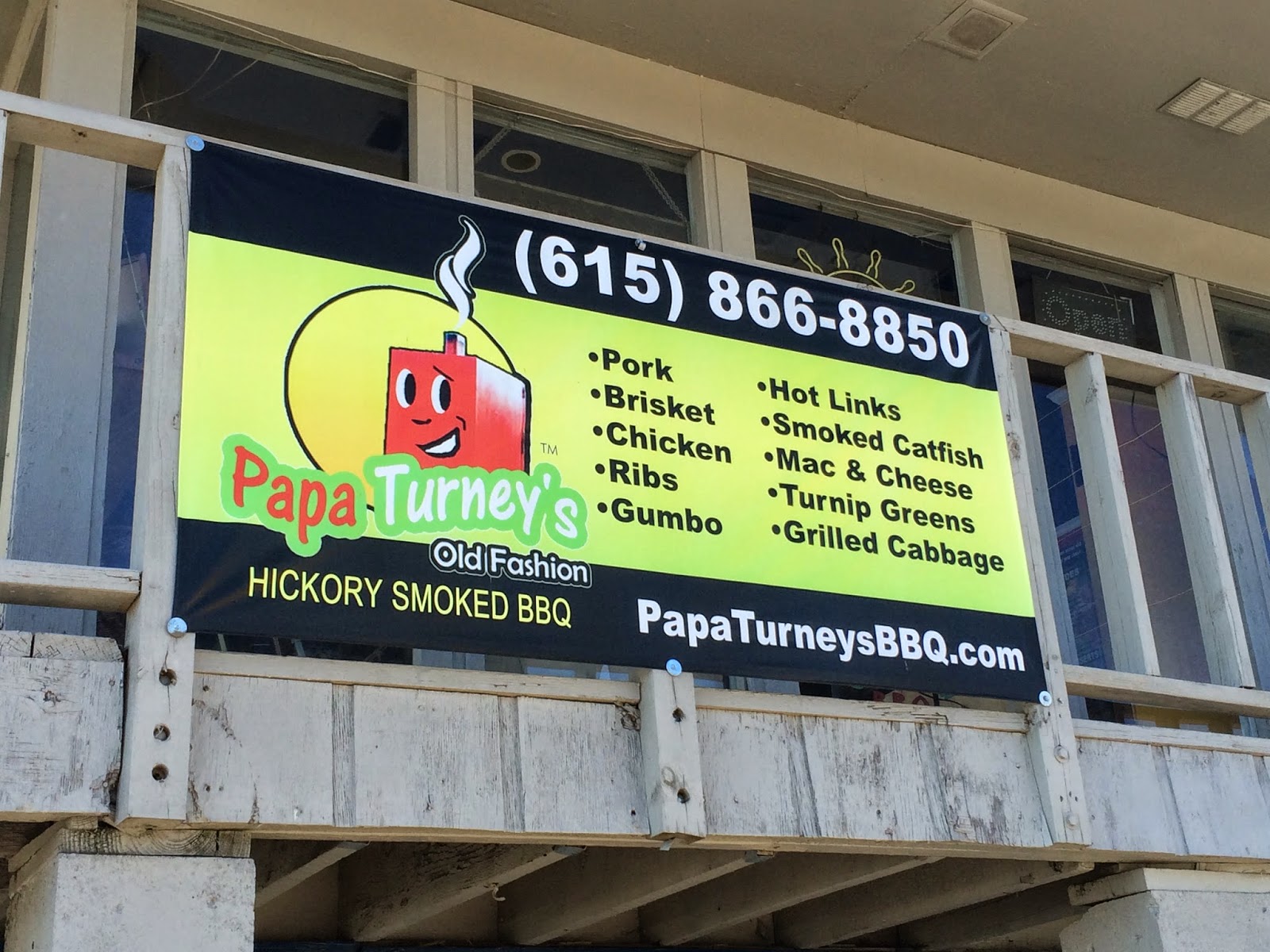 The official address for Papa Turney's is a bit confusing. The restaurant itself isn't on Bell Road, although the turn-in for the Nashville Shores Marina is. Papa Turney's opened up this new location less than a mile away from their old spot, but it wasn't until a few months ago that the original operation shut down completely. Their new home overlooks Percy Priest Lake and the marina, which is certainly a nice change of pace. It was far too cold for any aquatic activities today, but I'm sure this location will be booming come springtime. 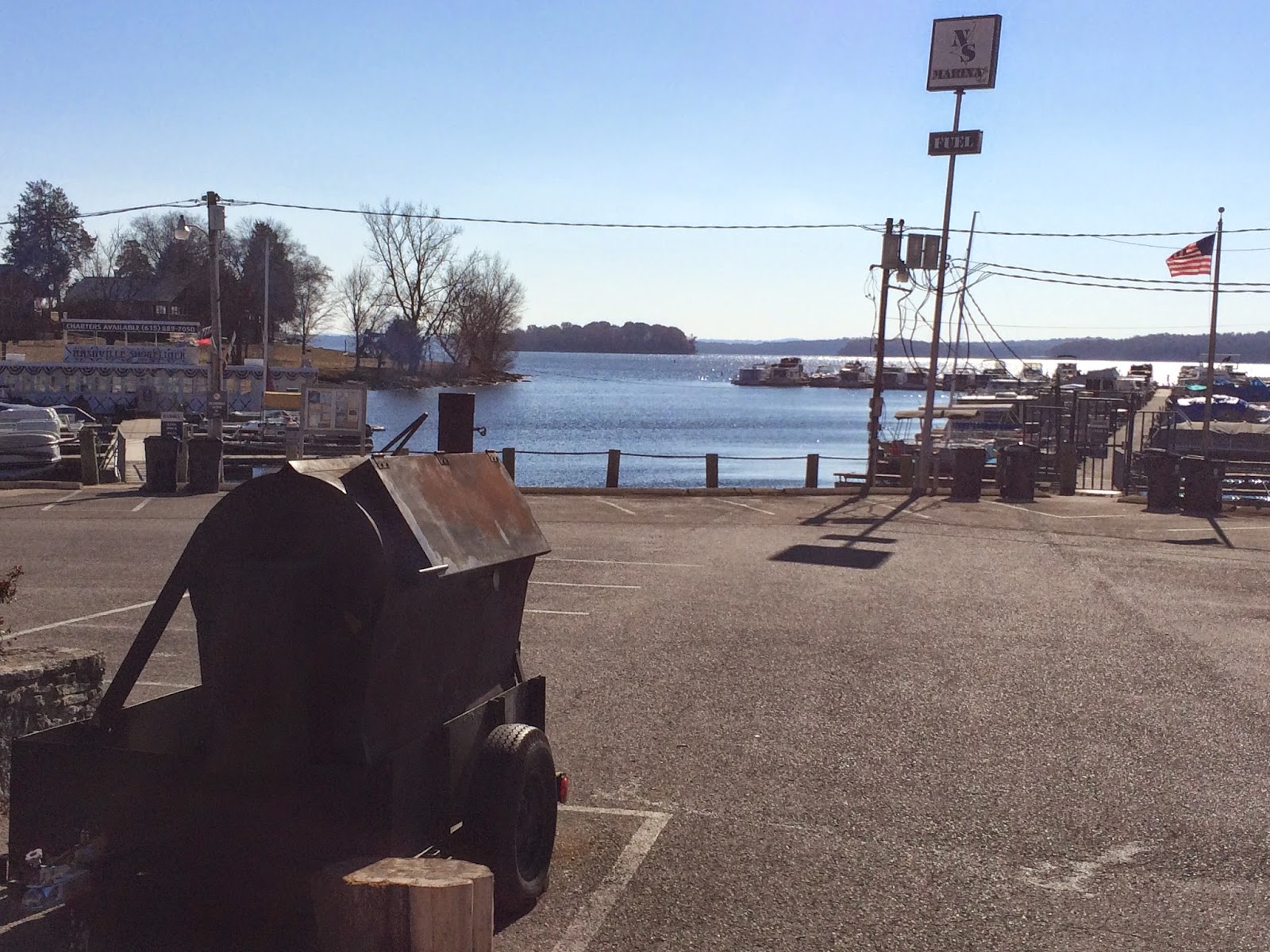 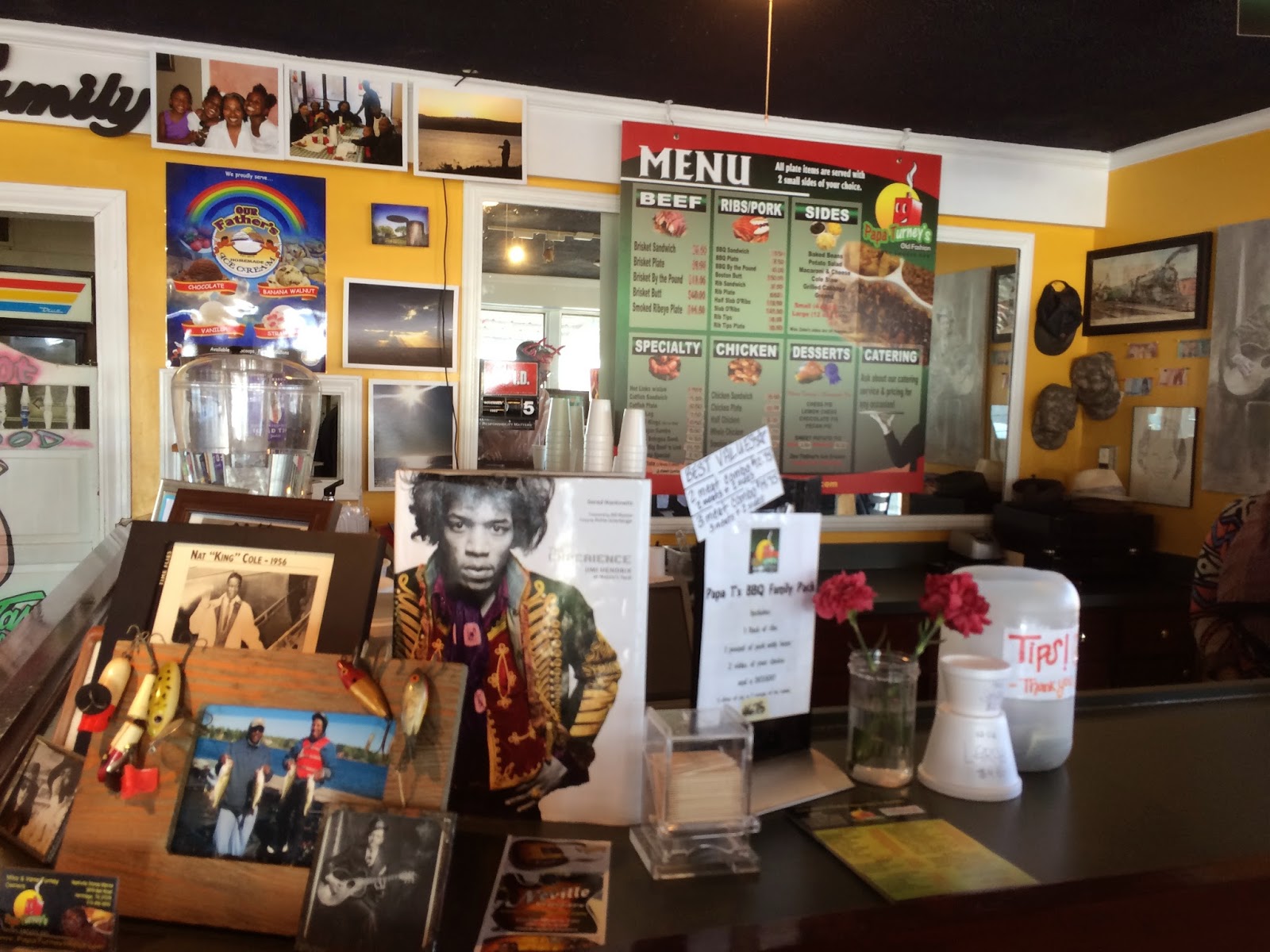 This seems to be a family operation. Papa Turney (aka Mike) himself came over and chatted me up for a bit. I learned a little about the history of the Turney family, which was pretty cool. He also described their quality control standards and said that he has no problem throwing away a whole rack of ribs if something doesn't look or taste just right. Papa Turney struck me as a genuinely friendly guy who really loves what he does.

By the looks of things, Papa Turney's has live music fairly regularly. I'm sure that plays well (no pun intended) with the marina crowd. The cool dude on acoustic blues guitar today was pretty decent, and it definitely livened things up a bit. 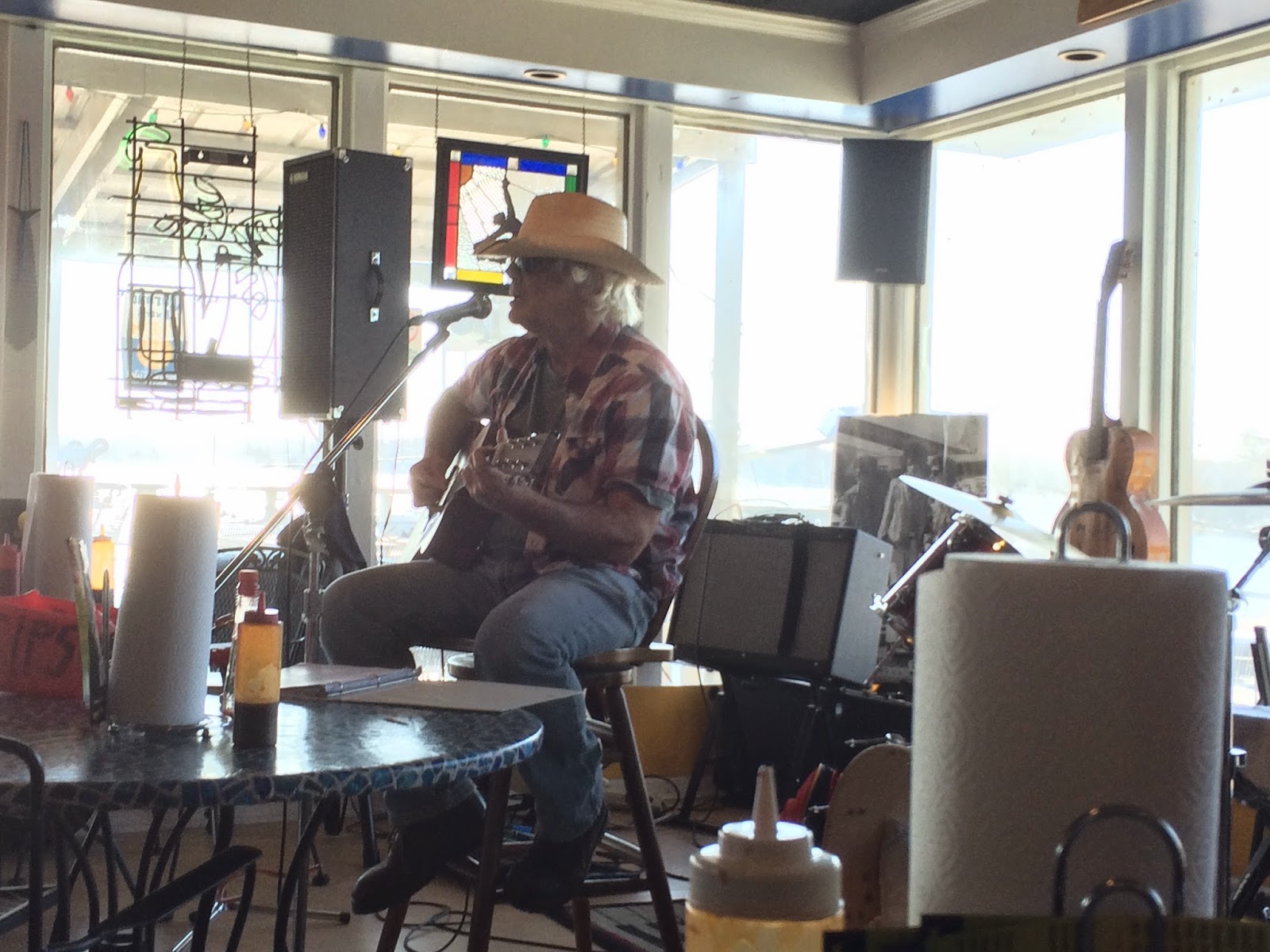 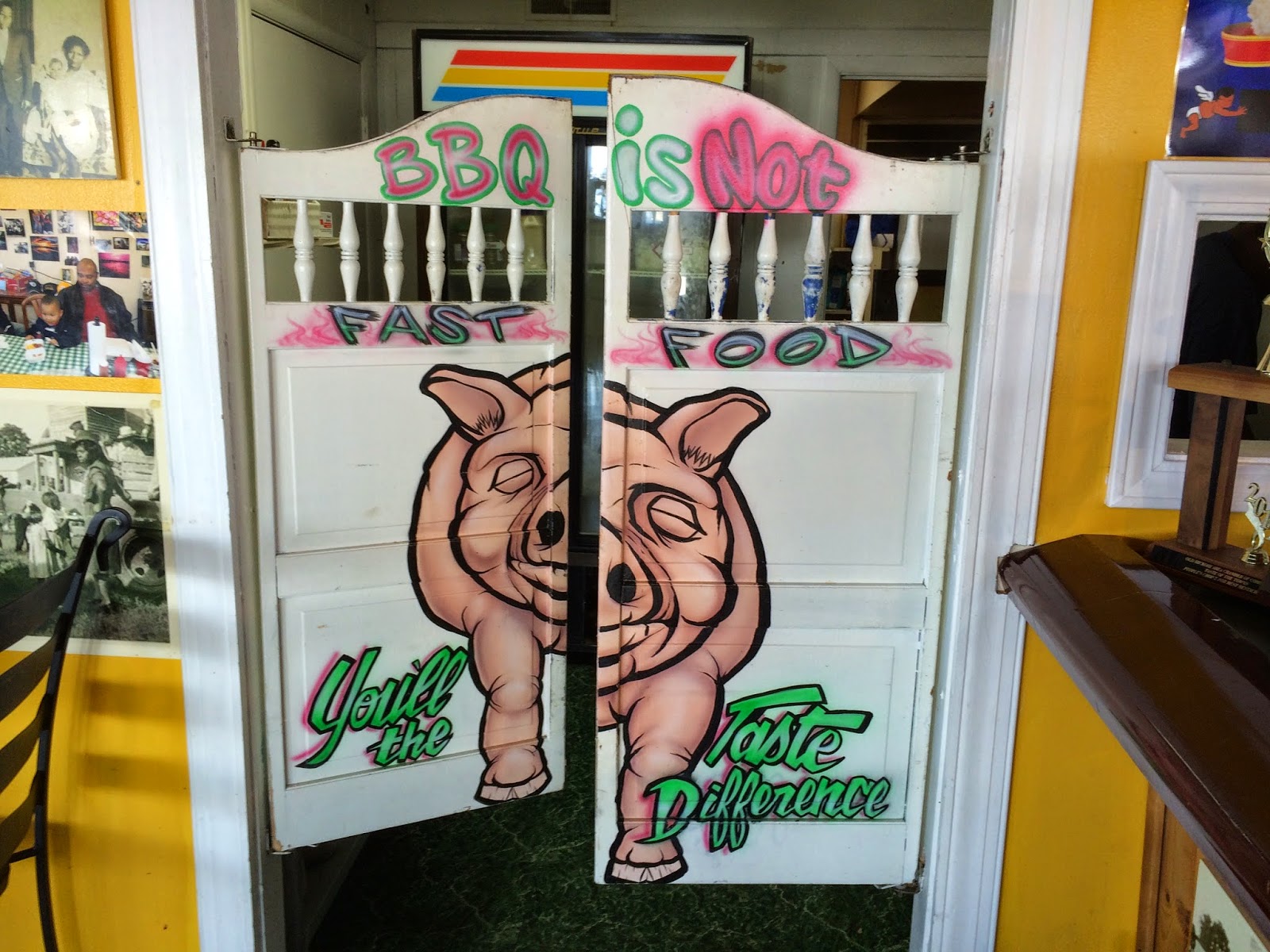 I ended up with a combo plate of brisket, ribs, and hotlinks, with potato salad and mac and cheese on the side. I also made sure to request sauceless meat, and they were happy to oblige. Part of me really wanted to tack on some of their "brisket butt" (basically the thicker end of a beef tenderloin), but $60.00 per pound is too rich for my blood. According to some old menu pictures I found online, they've raised the price of this specialty meat by $15.00 a pound. That's kind of a steep jump, but I guess they're trying to pay for the new location. Too bad. 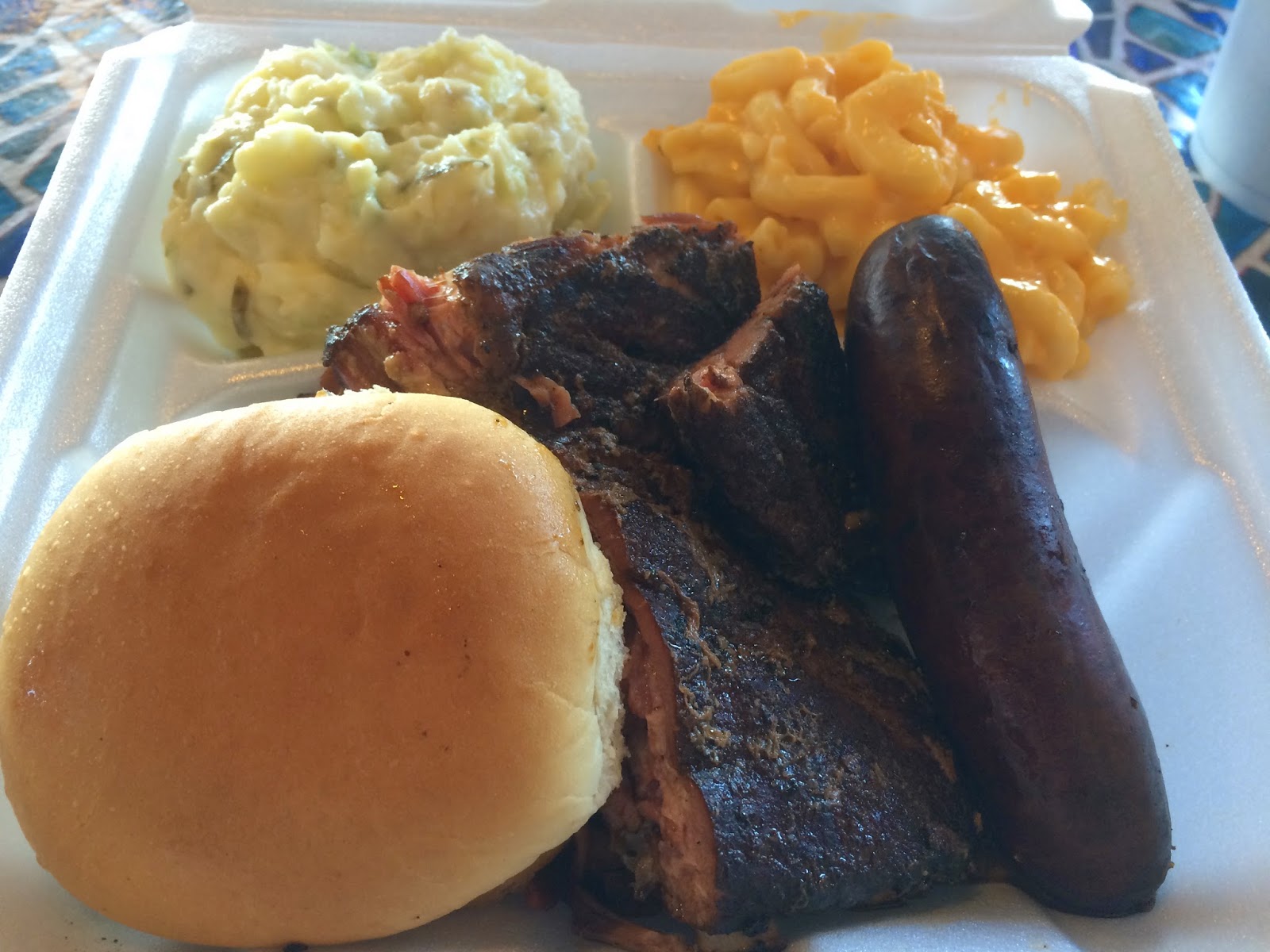 The macaroni looked like basic Easy Mac, but it had a nice cheesy flavor. It was also great comfort food on a chilly day. I could see plenty of diced pickle scattered throughout the mayo-based potato salad, and I could definitely taste the hard boiled egg. It was a little too sweet for my liking, but otherwise very good.

Truth be told, I had originally intended to order pulled pork as part of my three-meat combo, but my Texas Trinity reflex must have kicked in and instinctively ordered "brisket, ribs, sausage." I actually didn't realize it until my order came out. Oh well. The hotlink sausage was good, though not overly spicy. It had a good crisp casing, too. The finely-ground meat was a tad mushy, almost like boudin without the rice. I couldn't pinpoint all of the spices I was tasting, but I enjoyed them nonetheless. It was definitely different than the East Texas hotlinks I'm used to.

Sadly, their brisket comes chopped, and it also came inside a mini slider bun. Barbecue sandwiches are fine in certain circumstances, but I feel like a combo plate should contain slices. When Papa Turney learned that I am a native Texan, he instantly told me that they serve the brisket chopped because it actually comes out too tender to slice properly. That makes sense, and even though the meat was lean, it was definitely tender and juicy. I also found a decent smoke level, as well as good pieces of chopped bark and smoke ring. The seasoning was simple, but tasty. Their brisket was much better than I had anticipated.

The pork ribs had a nice crust and a dark pink smoky hue. The rib meat fell off the bone with almost no effort, but still clung to itself nicely. It was moderately smoky and had a good amount of salt. The pork was also very juicy. Something about the texture wasn't quite right, but then again I'm also accustomed to Central Texas barbecue, so who knows.

For no reason in particular, Papa Turney offered me a free mini Chess Pie to take home. I definitely wasn't turning down his generosity. 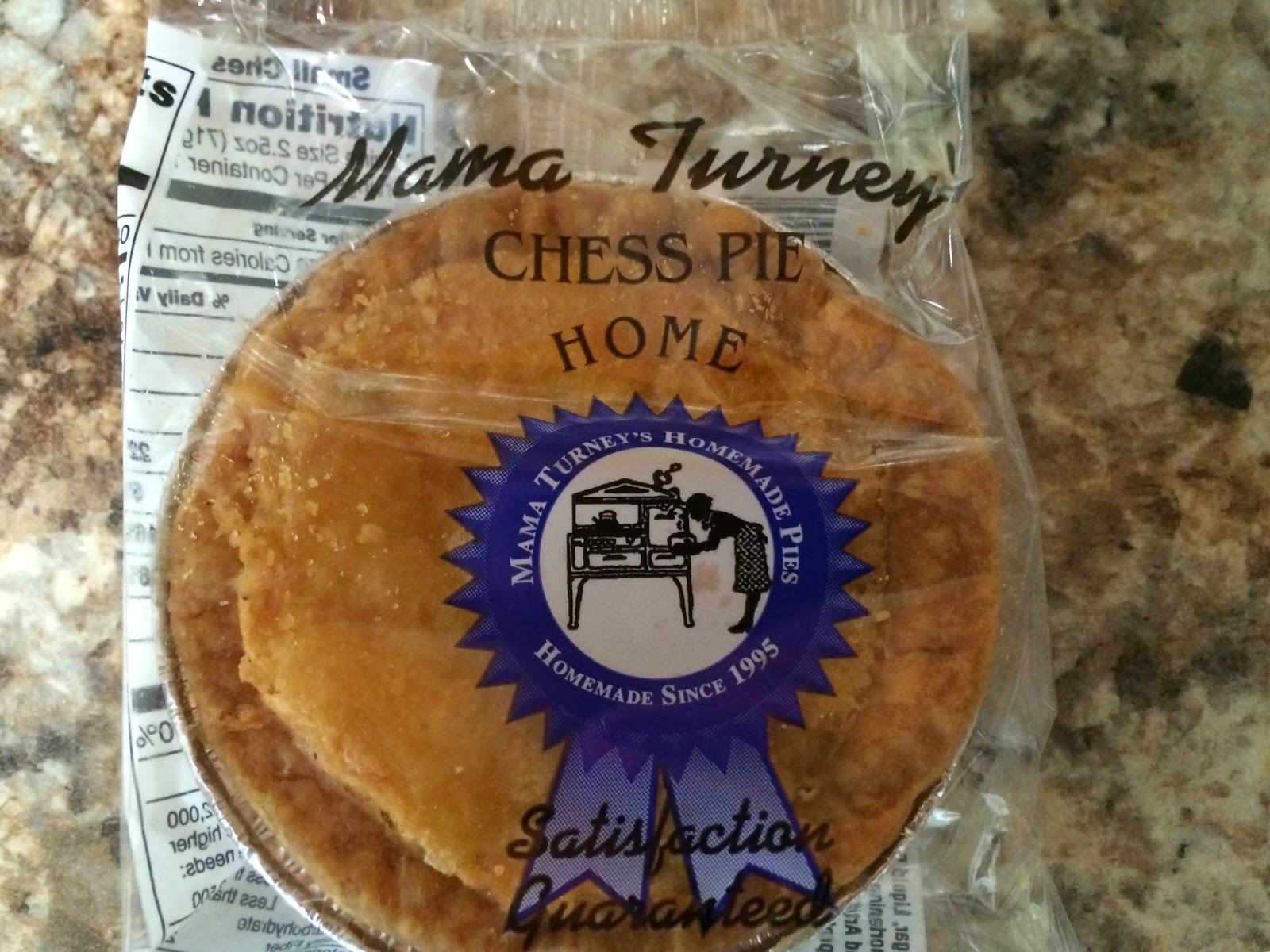 In a word, delicious! The pie was very gooey and flaky, despite being prepackaged. It had a diabetes-inducing amount of sugar and butter, which can only be found in Southern desserts. I also noticed hints of what I think were brown sugar and vanilla. Next time I hit up Papa Turney's, I'm buying at least a dozen of these!

I'm really glad I decided to give Papa Turney's a shot. These guys truly care about their craft, and it shows.

After a brutal day at the DMV and running other various mind-numbing errands, I found myself in need of some serious barbecue therapy. Hog Heaven is situated fairly close to Vanderbilt University, but somehow they managed to stay off my radar during my tenure there. This was the closest barbecue joint to my current location, so I thought I'd give them a try. 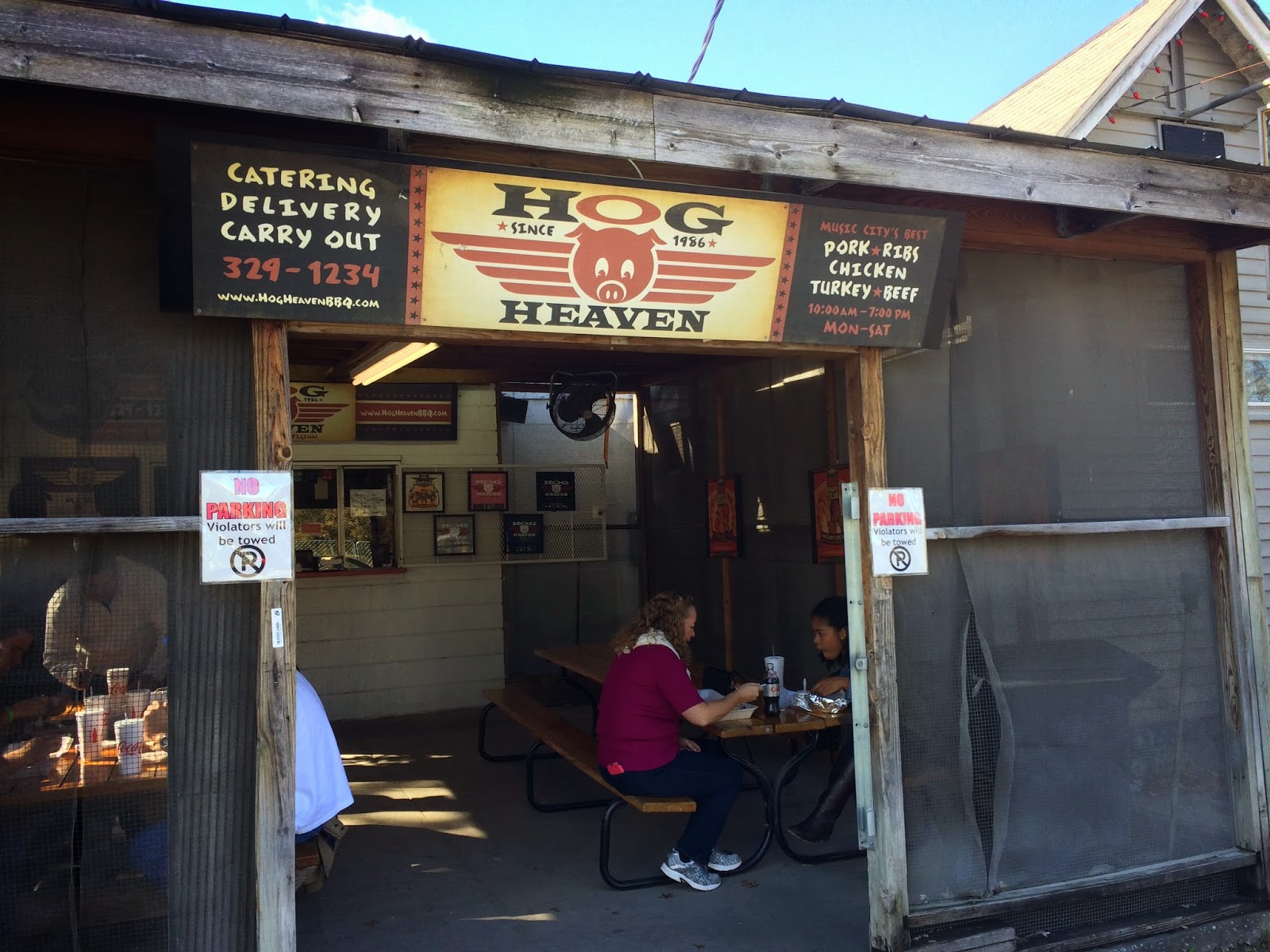 The spectacular Centennial Park across the street is the only ambiance you'll find at Hog Heaven. It's basically just a shack with a screened-in porch. Their two picnic tables offer enough seating for about 14-16 people, assuming you don't mind squeezing in next to strangers. I've eaten awesome barbecue from even more run-down spots than this, so I wasn't too worried. 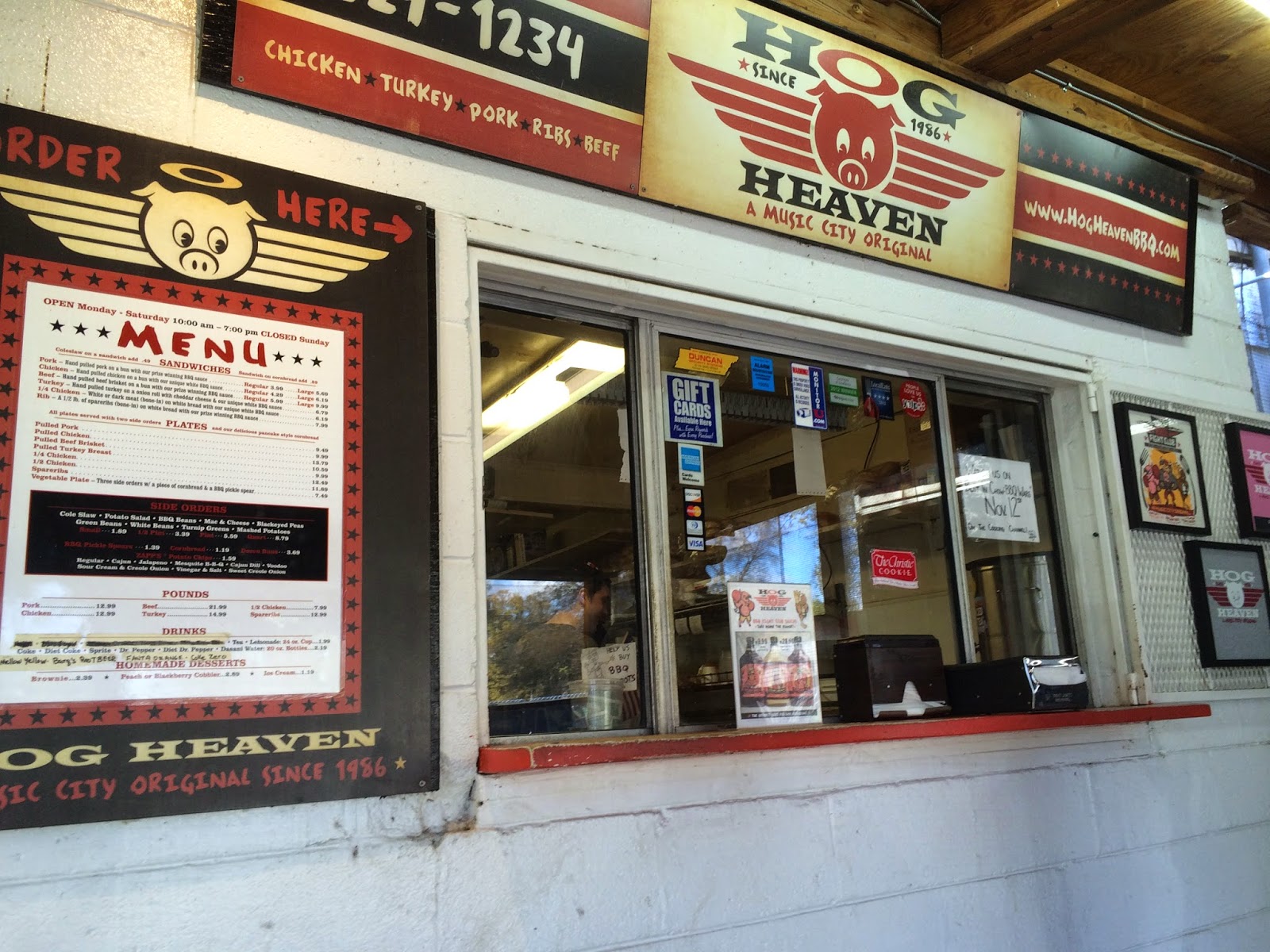 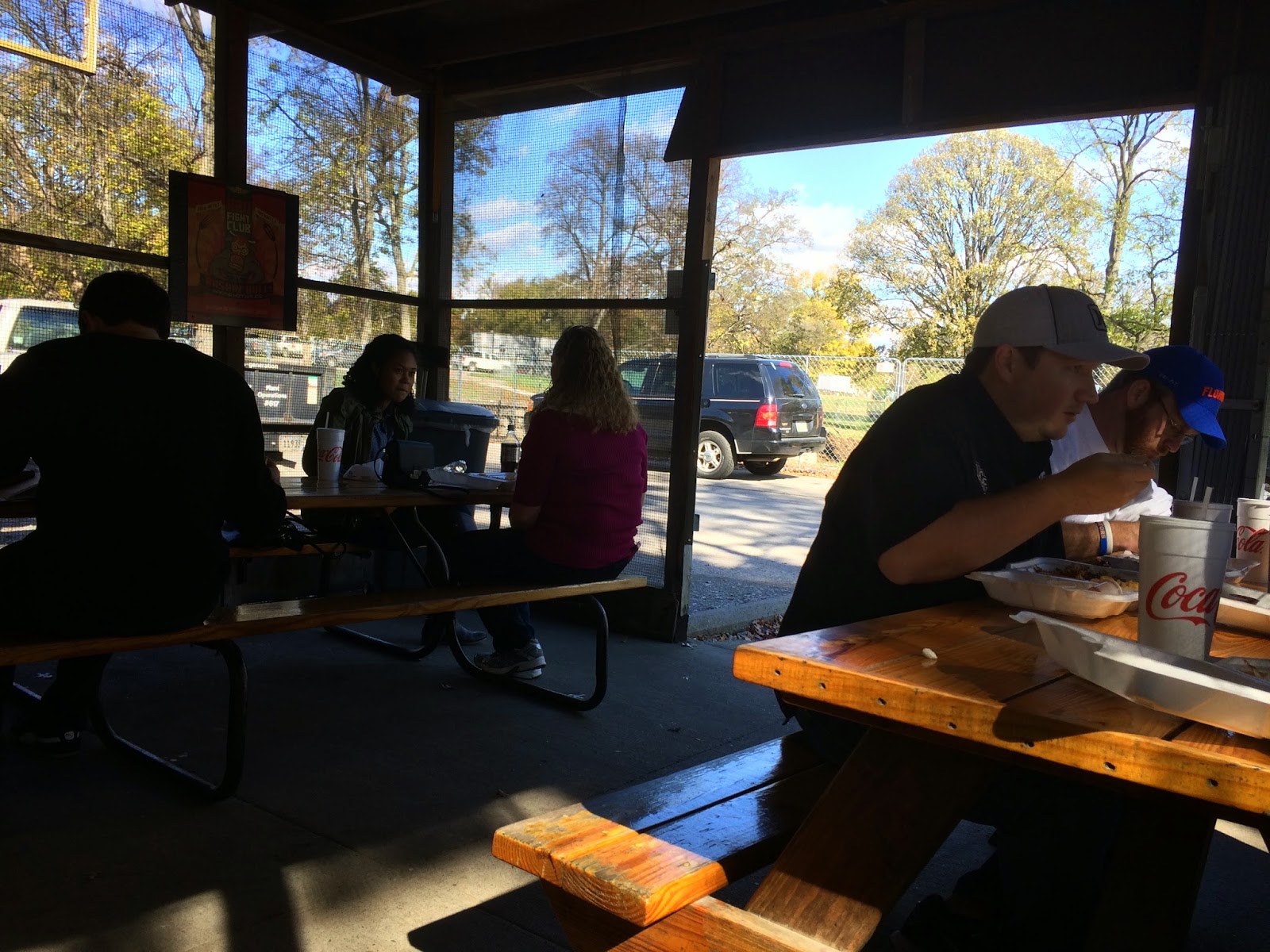 I normally go for a combo of some sort, but they didn't have any on the menu. The only option for beef was a pulled brisket plate, and I wasn't really in the mood for chicken or turkey. That narrowed things down to pork, which is probably the most appropriate order at a place called Hog Heaven anyway. I got their Spareribs Plate, with potato salad and white beans on the side, plus the automatic pancake-style cornbread. I made sure to ask for sauce on the side and was presented with a handful of options, of which the white barbecue sauce sounded the best. The guy at the counter assured me that it was an excellent dipping sauce for ribs. 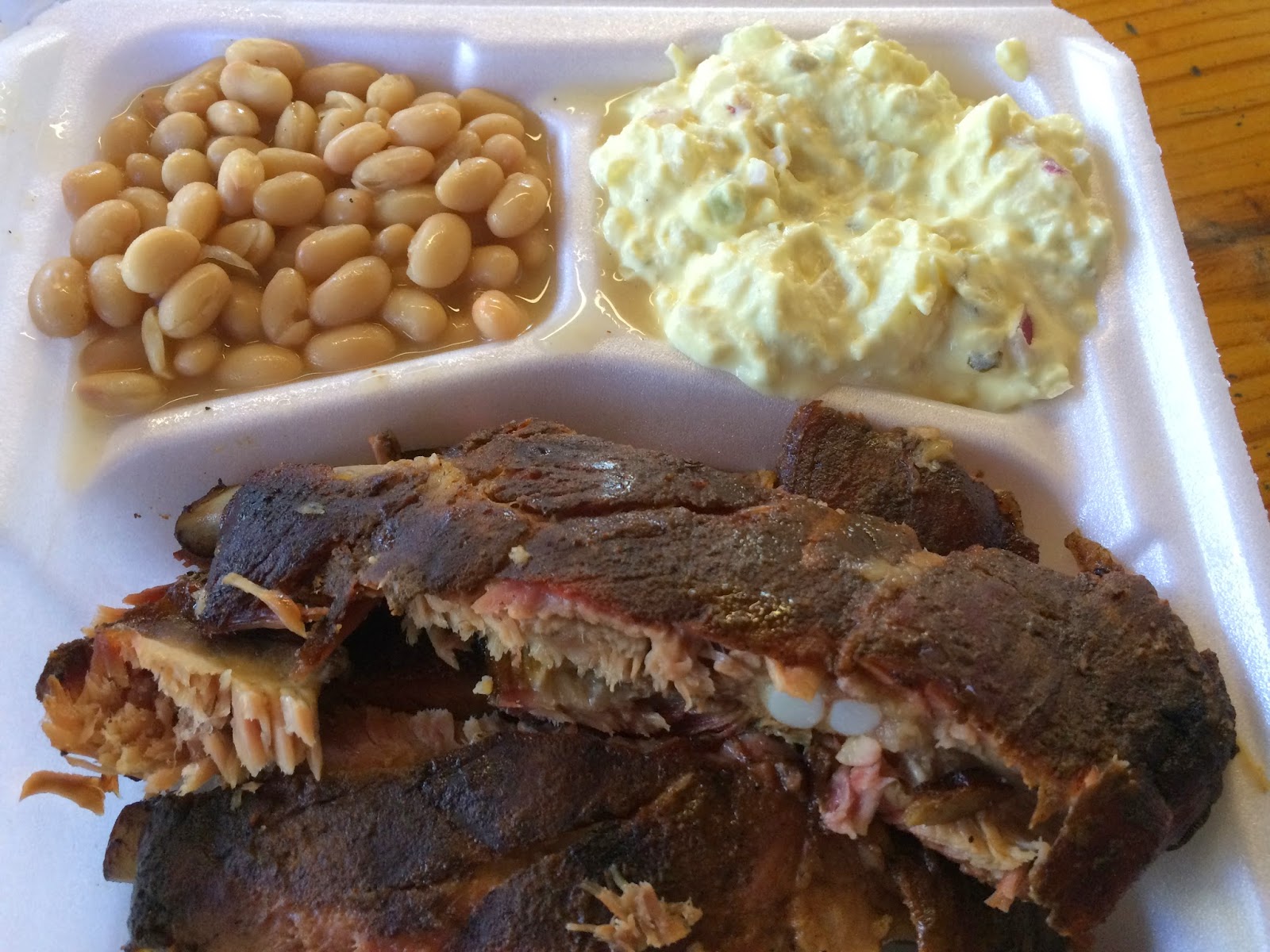 All of the sides looked pretty good from the outset. The cornbread was ok, though a tad dry. Luckily for me, the potato salad was creamy and rather tasty. There was a good blend of spices and plenty of bite from all of the red onion mixed throughout. My beans had an interesting flavor, kind of like a bean soup without all the liquid. They also had some mild after tones that I can mostly accurately describe as sweet, but I don't think that's quite right either.

The slightly-mangled ribs appeared to have a good crust. That being said, all of the meat fell off in my fingers, which is usually a bad sign. I found a decent smoky flavor, but otherwise the ribs were kind of bland. Even the crust was devoid of seasoning. Some parts of the meat were a little tough as well. Although I'm not a big sauce guy in general, I thought the white barbecue sauce might help jazz things up a little. This was just what the ribs needed. The white sauce was much zestier than regular red barbecue sauce. It was almost like a southwest ranch dressing, but better. It also added some heat, which played nicely. I know that white barbecue sauce is generally reserved for poultry, but I really enjoyed pairing it with the pork ribs.

My favorite part of this meal was definitely the white barbecue sauce, but it wasn't enough to salvage the mediocre ribs. Hog Heaven needs to spend less time on the condiments and more time on the meat.