A long-standing Little Rock barbecue institution, Casey's Bar-B-Que, re-opened its doors in a brand-new location just a few weeks ago. Of course, I had to go investigate and see if all of the hype was justified. 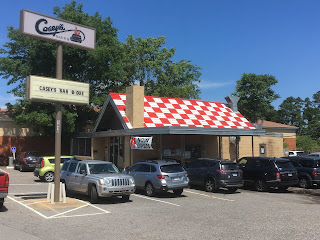 Casey's closed up shop in 2005 after twenty-two impressive years in business. I'm not sure of the exact reason for the closure, but, needless to say, many Little Rock residents are plum tickled to see them back in business. I've awaited their opening for a while now, which got delayed because of permit issues and other unfortunate events. With newness comes long lines, and in order to avoid such, I arrived promptly at their 11:00am opening time.

The new location is in the home of the former Arkansas Burger Company, but Casey's doesn't feel like a burger joint whatsoever. It actually has kind of an indoor-outdoor vibe with all of the brick and white shiplap. I liked the exposed beams, too. The place is clean, welcoming, and open, with wall-length windows making the place feel even larger. Casey's has a nice patio space out back, even if it is a tad small. They also made good use of the existing drive-thru on the building, which I'm sure will get a ton of traffic. 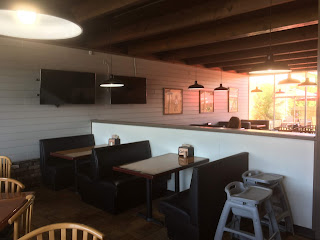 At Casey's, just order at the counter and plop yourself down anywhere you like. I got their regular combo plate with sliced brisket and pulled pork, plus potato salad and bbq beans on the side. There is a large combo plate available, but apparently it just comes with an extra side, not an extra meat. So I stuck with the regular size and added on a half-pound of pork ribs to round things out. After all, I wanted to get the full Casey's experience. Service was fairly slow, even though I was only the third table through the door. I had my food in about fifteen minutes. Hopefully that's just some growing pains while the new employees figure out a rhythm. 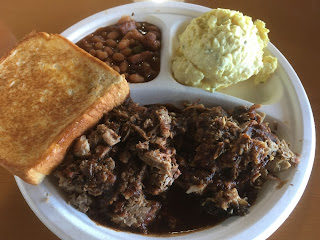 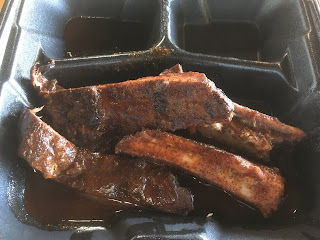 The potato salad had a pleasant amount of mustard. It was also very tangy, with a good crunch from the veggie mix-ins. I found big hunks of meat scattered throughout my beans. They were very sweet, and only slightly peppery despite all of the visible black pepper.

My requested slices of brisket came out chopped. Maybe the cashier misheard me. The beef was a little chewy, though not dry. Casey's super-vinegary barbecue sauce was definitely front and center here. I could taste some good smoke through the sauce, which surprised me. It was difficult to find things like a crust or a smoke ring in this form, but at least the flavors were on point.

The pulled pork, although a little less smoky than the brisket, was very tender. I received a few pieces of bark in my helping, which were well-seasoned. With all of the sauce, the pork tasted pretty much the same as the beef, just a different texture. I'm not suggesting that this was a bad thing, it just wasn't unique enough to detail further.

Despite placing a dine-in order, the ribs arrived in their own carry-out container because "they're very messy." Yes, I would agree. The ribs were swimming in a literal pool of sauce that rose about halfway up each bone. My half-pound order amounted to four ribs, which was probably more than plenty. I found a deep reddish crust and juicy pork beneath. The meat came off with ease, but did manage to stay put until I was ready for the next bite. A heavy dusting of spices coated the ribs on all sides. The sauce probably paired best with the ribs, since it simply coated them and rolled off instead of soaking in.

If you're going to grab a two-meat combo here, go for the ribs and pulled pork, since the beef/pork combo ended up being a little superfluous. I'm glad that Casey's Bar-B-Que is back in action, and I wish them well. My in-laws want to try out their new 'que as well, so I'll probably be eating there again in a few days!

UPDATE (May 19, 2018): As predicted, we grabbed a Casey's to go order for our family dinner on Saturday. I went with a family pack (of course) with a pound of pulled pork and sides of bbq beans and potato salad. For my kiddo, I also ordered some of their smoked turkey. I had initially wanted an additional side of mac and cheese, but since they were out, a few orders of their spiral cut fries had to suffice. The sauceless pork was even tastier than before, at least to me, since I prefer my meat au naturel. The real winner, however, was the turkey. Our slices had just come off of the smoker, so they were as fresh as could be. It was exceedingly smoky and really, really tender. In my opinion, if you like the smoked turkey from nearby Burge's, this was at least twice as good.

I managed to take my family on a bit of a wild goose chase out to Oceanside, California for some barbecue. We came to San Diego for a week-long vacation, and I picked Felix's BBQ with Soul as my one customary barbecue indulgence. Our afternoon activity already put us up in Carlsbad, so I figured this would be an easy addition to the itinerary. Not so much, given both the traffic and the distance. 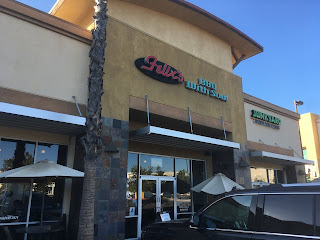 Felix's has more of a casual, bistro-esque interior than I was anticipating. It was comfortable and clean, without much decoration to speak of really. Some cool blues music might have been a better choice for ambiance than the old crooners, but that's a personal opinion. Either way, it was still pleasant. 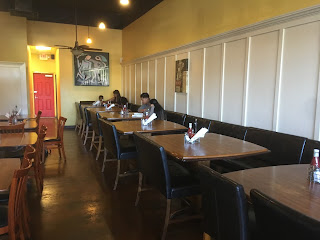 We ordered an appetizer of fried green tomatoes for no real reason in particular. Barbecue joint aside, this was a little far from the Mason-Dixon line, so I had some reservations about them. 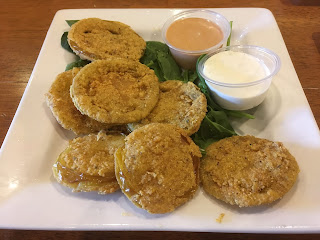 The tomatoes had a well-seasoned batter, and their tartness paired well with the zesty remoulade accompaniment. That said, they were kind of falling apart at the seams, which made them fairly difficult to eat.

I initially had my eye on sharing a four-meat, four-side sampler platter, but the wife was more interested in chicken tenders for some unholy reason. Without her to help eat at least a little of my meat, I settled on a custom two-meat combo of tri-tip and St. Louis ribs with macaroni and sweet potato fries. When eating barbecue in California, tri-tip is pretty much a given. 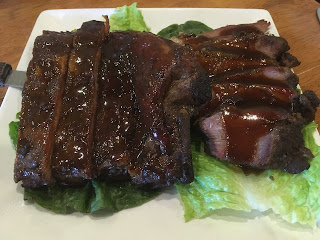 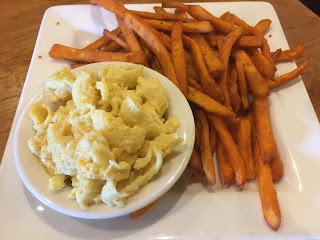 Our complimentary cornbread was slightly sweet and not the least bit dry. Big elbow pasta was a good choice for the macaroni. The cheese was a little grainy, though still very gooey and tasty. My fries were sufficient, but nothing special at all.

The tri-tip was a little chewy, but not dry. It was an interesting texture. The fattier slices were more tender, and their fat was also nicely rendered. I found a moderate smokiness without the usual smoke ring. The crust, though seasoned well, didn't really add that much to the flavor profile. All in all, I liked it just fine.

Both the tri-tip and the ribs were served over lettuce for some bizarre reason. My ribs were big and meaty, but St. Louis ribs they were not, since the rib tips, etc. were all still attached. I appreciated the deep red crust. The meat came off with zero effort, a touch overcooked. Their honey glaze was fairly sweet, while the peppery rub was a good contrast. A third-rack was as many ribs as I needed today.

Felix's BBQ with Soul was a little hit or miss. It was also pretty expensive. Besides my custom order, we had the tomato appetizer, an order of chicken tenders, and a kids PB&J. All of that, with tax and tip, ran an astonishing $80.00! The food was ok, but certainly not worth that much. While I'm grateful to my wife for indulging my hobby, I wish that I had picked someplace else.