Mrs. Barbecue Fiend and I drove down to Destin for a week of nothing but relaxation, pina coladas, and fresh shrimp. She is definitely the beach bum of the family, while I tend to get a little hot and bored out on the sand. Thankfully, she was kind enough to allow me a lunchtime barbecue indulgence. I knew I had to make my choice count, so I picked new local favorite Buck's Smokehouse. 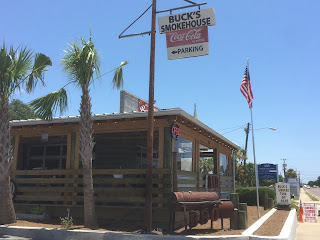 When we pulled up and saw large piles of wood stacked in the parking lot, I was certain that I made the right choice. Buck's opened in 2014 with the goal of bringing what they call "old school BBQ" back to Destin. By the look of things, this entails serving un-sauced smokehouse-style meats on butcher paper, much like you'd find in the old Central Texas meat markets. They also have a handwashing trough just outside the door in case you get a bit sloppy with your 'que. This is a brilliant idea, but somehow I doubt that my wife will let me install a trough at home. A man can dream though... 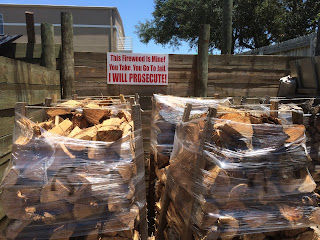 Buck's Smokehouse has a very welcoming feel to it, mostly because of the abundant natural light beaming through their large windows. The choice of mounted fish and nautical decor combined with deer heads and barbecue nicknacks seemed a little motley at first, but it actually did a great job of bridging the gap between sea and smoke. As nice as the interior was, we had our sights set on their big outdoor patio. Though it lacks a view of the Gulf, it does provide a great breeze and a pleasant dining experience. Sitting outdoors also seemed to placate my wife, who was itching to get back to the beach. 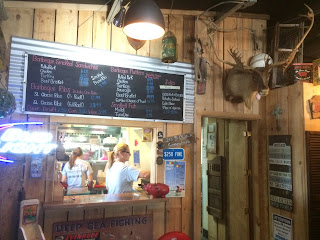 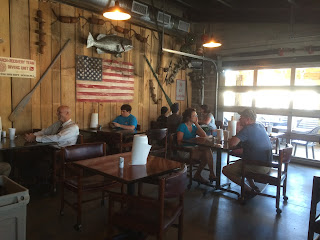 We were going to be sharing, so I had the honor of ordering for both of us. They were out of chicken and turkey that afternoon, but fortunately I don't really care for either of them anyway. I loaded up on a two-meat Combo Platter of brisket and sausage for myself, with potato salad and chips (they were also out of fries) on the side. For my wife, I ordered a second two-meat Combo Platter of prime rib and pulled pork, as well as some mac and cheese and BBQ pork and beans. 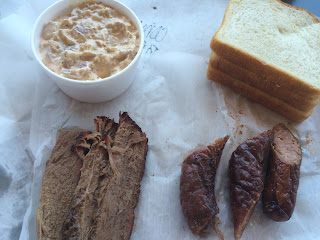 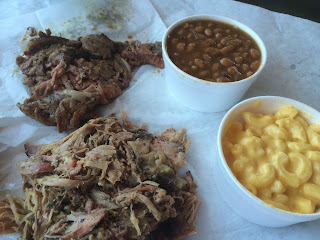 I could hardly contain myself when I saw the caliber of barbecue I'd just unwrapped, but I somehow managed to suspend my carnivorous yearnings long enough to taste the side dishes. The chips were of the basic Lays potato variety, and as such were not worth commenting on. I simply took them with us to eat later on the beach. The macaroni was full of gooey, melty cheese, but could have used some pepper or jalapeno to jazz things up. As for the BBQ beans, they were pleasantly sweet and had ample seasoning. I also loved the chunks of pork mixed right in. The potato salad was definitely my favorite here. It was slightly spicy, almost like they used a remoulade for the base rather than basic mayonnaise. There was also a great crunch from the vegetables, and the finely-diced potatoes were cooked just right. Our side dishes started off weak, but kept crescendoing up to an awesome finale.

My inner-Texan insisted that their brisket be the first meat sampled. I'm glad I listened, because it was beyond reproach. As beautiful as the rosy smoke ring looked, the smoky brisket tasted even better. The crust was seasoned nicely and also added quite a lot of flavor to the meat. We ended up with leaner cuts of beef, but they weren't the least bit dried out. All in all, the brisket reminded me of Texas, which is probably the highest compliment I could possibly give.

The pulled pork was equally spectacular, which I knew it would be judging by all of the bark, fat, and smoke-kissed bits scattered throughout. Every bite was extremely flavorful, both in terms of the smoke level and the seasoning. The meat was very tender without having that mushy quality that far too often plagues pulled pork. My wife thought the pork was just a tad dry, but I absolutely loved it.

It's hard to get good sausage outside of Texas, with the vast majority of barbecue joints shamefully serving store-bought links. This sausage, however, was near perfect. The crisp casings had a great snap to them, and the coarse-ground meat inside melted when bitten into. I don't know if Buck's makes their own sausage, but it certainly tasted homemade. The spices sprinkled on the outside provided a good kick and more flavor than I expected to find in this neck of the woods.

Last but not least, the prime rib. I don't see this offering on many barbecue menus, but I'm always ecstatic when I do. The meat was cooked close to medium-rare, as it should have been. The razor-thin slices were incredibly tender, and the high fat content made things extra juicy and extra delicious. There was a great array of spices, but most of the flavor came from the massive amount of smoke packed into each bite. In fact, the prime rib was probably the smokiest of the meats, presumably because the fat had soaked up a ton of it during the smoking process. I found it really hard to stop eating once I had built up some inertia.

I'm not normally a big fan of sauce, but Buck's had three different homemade barbecue sauces that looked too fantastic to pass up: Carolina mustard, classic red, and Alabama white. Besides, all of the meats were already phenomenal on their own, so why not put a cherry on top? The mustard sauce was my wife's favorite of the three. It was tasty, with a great bite to it. Since it was less liquidy than expected for Carolina-style, it was the perfect dipping sauce for the sausage. The classic red barbecue sauce was slightly sweet and really, really good. I could have eaten it by the spoonful. Unsurprisingly, it paired best with the brisket. Their Alabama white sauce was also very flavorful. It had a lot of pepper and other spices, which made it quite savory and gave it some nice heat. Although white sauce is generally reserved for barbecue chicken, I actually like it most with pulled pork.

We came to Florida for sun, sand, and seafood, but I'm really glad that we added a little barbecue to our itinerary. Buck's Smokehouse has certainly achieved their goal of bringing "old school BBQ" back to the Gulf coast.