Even though Clyde's on Church (an offshoot of a popular, similarly-named Chattanooga, Tennessee joint) has only been open since early March, it's already developing quite the reputation amongst Nashvillians. Maybe it's the food; maybe it's the foosball, shuffleboard, and ping pong tables; maybe it's the general funky attitude. Whatever it is, I was certainly intrigued. I could have easily walked the mere half-mile from my office to Clyde's, but considering the heat and the humidity, I embraced my inner laziness and drove. 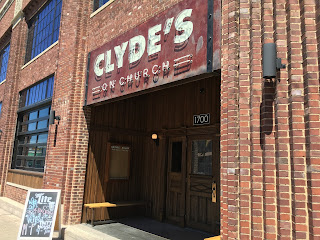 Predictably, my party of one resulted in seating at the bar, which I actually prefer in these scenarios. The atmosphere here is even more lively than I had imagined. Great classic rock tunes and neon signs surely play well during happy hour, but they made my lunch run more enjoyable as well. I briefly considered attempting a solo game of ping pong against the wall, limited only by persistent thoughts of "what would my wife say?" Maybe next time... 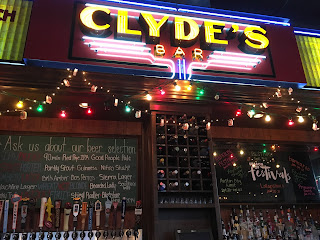 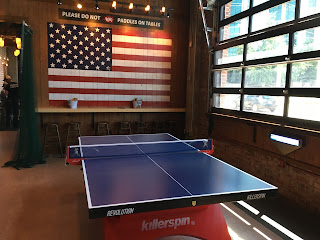 The menu at Clyde's ranges from fried chicken, bahn mi sandwiches, and jerk pork to baked potato soup, veggie/vegan burgers, and kale salads. A motley assortment indeed, although I was most interested in their smoked selections. Clyde's doesn't have any barbecue combos, unless you count their Pork and Wing plate, but that never stopped me before. I started with an appetizer of BBQ Potato Skins. These bad boys come topped with pulled pork, house-made pimento cheese, green onion, and sour cream. I asked for my barbecue sauce on the side, just in case. 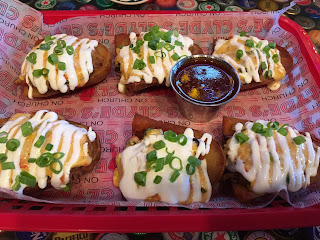 Without question, the potato skins looked incredible. A decent amount of smoke shone through, despite the gooey cheese and luscious sour cream. I could also see ample evidence of pink smoky pork jutting out. The crunch of green onions and crispy potato peel added a great texture to each bite. Suffice to say that I never once considered using my side of barbecue sauce.

For the main event, I ordered their Texas Style Smoked Brisket plate, which comes with Texas toast, baked beans, and your choice of slaw. I decided to rock the boat a little bit. Instead of beans, I subbed in some gouda creamed corn (at a slight upcharge). As for the slaw, my options here were for mayo and hot mustard varieties, but not being a fan of slaw in general, I politely requested red potato salad. 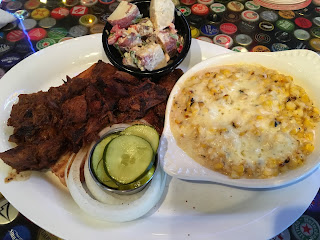 The potato salad came with big hunks of red potatoes and only minimal dressing. I found the acidity of the pickles very prominent, perhaps the most dominant flavor present. It was served differently than most potato salads I've eaten, and I really enjoyed it. The creamed corn was absolutely spectacular. The mass of melty gouda on top paired perfectly with the al dente kernels beneath. It was worth every bit of the $2.50 upcharge.

Their brisket is allegedly slow smoked in a sweet and spicy marinade of sorts, which they describe as "traditional". Perhaps I'm simply a barbecue purist, but, when it comes to Texas brisket, the only traditional marinade is no marinade. The same holds true for barbecue sauce, incidentally. [end rant] My brisket came out in regrettable chunks rather than the expected slices. That being said, it had an awesome smokiness and was very tender to boot. I also received my meat from the fatty point (aka deckle), which helped to soak up even more yummy smoke. There was plenty of delicious black bark mixed throughout, all of which had a ton of seasoning. I didn't notice any spiciness from the marinade, although it did make things a little more liquidy than I prefer. Regardless of this minor nitpicking, the brisket was exceptionally tasty.

Clyde's on Church may be more of a bar or local hangout than it is a traditional barbecue joint, but, when it comes to smoked meat, these guys definitely know what they're doing.

The weather decided not to cooperate with us, putting our planned beach outing on hold for the time being. Oh well, that gave me a great excuse to suggest a barbecue lunch instead. I initially had my sights set on finding some new non-chain barbecue to try around Destin-Fort Walton Beach, but honestly, the pictures I saw of the deliciously-smoky, Texas-style meats pouring out of Hickory River Smokehouse were enough to change my mind. Besides, with only seven locations (six of which are in Illinois and Ohio), we're not exactly talking Dickey's Barbecue Pit or Shane's Rib Shack here. 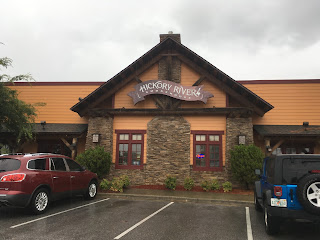 It was just a quick pop onto the Panhandle mainland from our digs out on Okaloosa Island. Hickory River has a distinct log cabin feel to it, and the warm woods made me feel right at home. Everyone working here was super friendly, especially our server, and the country music hits blaring over the speakers made things rather lively. In short, there was a great atmosphere all the way around. 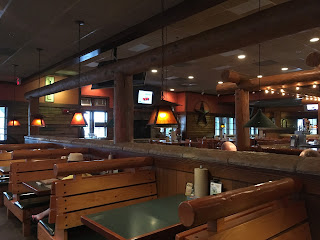 Even though I had a big scrumptious doughnut for breakfast, I was certainly in the mood for an appetizer. We ordered a round of fried pickles to warm up our palates. 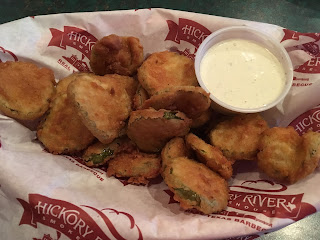 The pickles came out piping hot, and I wouldn't have it any other way. Their housemade batter was beautifully crisp and well seasoned. I also appreciated and enjoyed the acidity of the pickles themselves. It was certainly a great way to start things off, and needless to say, they didn't last long.

Hickory River has a three-meat "Create Your Own BBQ Plate" option, and you'd be a fool not to order it. I got mine with sliced brisket, pulled pork, and baby back ribs, as well as sides of potato salad and white cheddar mac and cheese. I didn't have any real intention of eating barbecue sauce, but I did get a sampling of their Mixed (not quite hot, not quite mild) sauce on the side just in case. 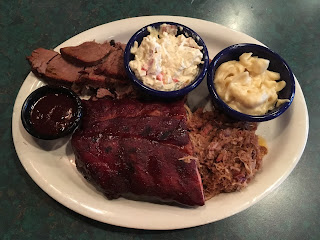 I love white cheddar, and this macaroni didn't disappoint. There was just enough cheesy goodness without being drowned in goo. The white cheddar offered sharper flavors than the standard yellow variety. I also enjoyed the big hunks of skin-on spuds in my potato salad, which had just the right texture. It was creamy and delicious, with a good crunch of pimentos and pickles. I think there may have been some bacon mixed in as well, but I was inhaling it too fast to know for sure.

The brisket had a prominent smoke ring, which was a good sign. I could tell right away that this was a leaner cut of beef. It was very tender, if only a tad dry for my liking (that sounds oxymoronic, I know). On the plus side, the brisket was quite smoky and had a flavorful spice blend on the bark. I still would have preferred a fatty cut, but it was pretty decent nonetheless.

My eyes were instantly drawn to the red smoky bits scattered all throughout the equally smoky pork. It was more what I would call chopped than pulled, but that lent to its tenderness. The meat was also really juicy from the light drizzling of thin sauce, which thankfully didn't do much to mask the natural pork taste. I had to exercise some serious discipline to leave enough pork behind for leftovers.

The ribs had a good dark crust with perfectly pink meat beneath. This was probably the smokiest of my three meats, making the ribs extra savory. The semi-sweet rib glaze was good, although not really Texas-style. I think they also could have spent a little less time in the smoker so as to avoid the "falling off the bone" thing, but otherwise they were very good.

Mrs. Barbecue Fiend ended up with a smoked turkey BLT sandwich, which she found to be exceptionally tasty. She was kind enough to share some of her poultry, and I wholeheartedly agree with her assessment. The turkey was tender and juicy, with a mild yet distinct smokiness.

Hickory River is a few tweaks and touch-ups away from having some really phenomenal barbecue. Even in its current state, it's still a good lunch option that gave us a nice break from seafood.