My wife and I spent a day at St. Thomas Midtown Hospital in Nashville bringing our precious baby boy into this world, plus a few more days recovering while we oohed and awed over how amazingly cute he is. The hospital provided my wife's meals, but as I was more or less on my own in that regard, I wandered down to their Balance Kitchen cafeteria to check things out. I never would have thought that hospital barbecue would be worth a flip, but the exceptionally smoky smell emanating from the cafeteria's Coast 2 Coast BBQ counter was enough to make me reconsider. 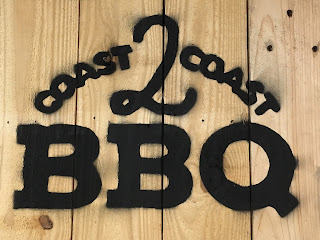 The barbecue at Coast 2 Coast is supposedly smoked on-site, although I'm not entirely sure how or where, and I can't imagine that pit smoke is exceptionally healthy in a hospital. Perhaps a pressure smoker or an indoor electric smoker? With my expectations low, I assumed that they would simply be spooning pre-cut meat out of containers and into sloppy joe-style sandwiches. I was pleasantly surprised to find an actual knife man slicing, chopping, and plating everything to order. 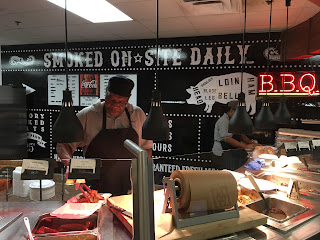 I thought I had ordered their two-meat Combo, but what I was handed was simply a giant plate of pulled pork and Texas-style brisket. Side dishes seemed to be an extra charge, and although I briefly considered adding something on, to be honest nothing that I saw struck me as overly appealing. Oh well, I'm really a carnivore at heart anyway. 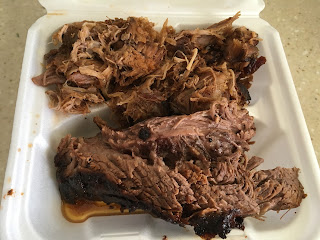 The fatty, moist brisket was chock-full of deliciously rendered fat. Thick slices are much more difficult to keep juicy and tender, but Coast 2 Coast pulled it off nicely. There was a great smoke level in each bite, particularly in the salty black bark. I also noticed a slight sweetness to the bark from their marinade, but I couldn't quite discern the dominant flavors (other than sugar, that is). This was certainly a commendable brisket.

You really can't serve barbecue in Tennessee without having pulled pork on the menu, and often you'll find that those two terms are synonymous. Coast 2 Coast's pork was just a tad dry but still had a great flavor, especially in the bark that was scattered throughout my heap of meat. There was a nice smokiness here, as well as the same sweet marinade that I had tasted in the brisket. They did have sauce available on the side, although the marinade is probably about all the sauce you need with this dish.

Coast 2 Coast offers some fairly successful barbecue in a fairly unexpected setting. After the first of what I can only assume will be many, many sleepless nights sitting up with our little boy, it was nice to find a little smoky sustenance at St. Thomas Midtown.

Neighbors of Sylvan Park isn't a place that I've necessarily heard much about, but lately I've had a desire to expand my lunch options beyond the usual walking distance radius around my office. Located in (surprise, surprise) Nashville's Sylvan Park neighborhood, Neighbors would certainly provide a change in scenery, and I'm always anxious to expand my barbecue horizons. 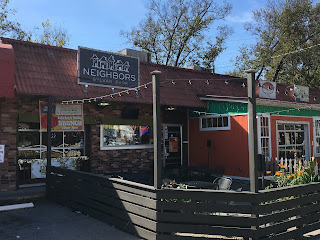 This place is fairly dark and dingy, with a dive bar look that's matched by its dive bar smell. I guess Neighbors is technically a non-smoking establishment, but with all of the employees taking cigarette breaks out on the back patio, I sure couldn't tell the difference. The patio itself is actually pretty nice, all things considered. The decor here is probably what you'd expect: old cracked bar stools and about as much random crap as they could possibly fit on the painted cinderblock walls. I also noticed more flies circling around than I typically care to see while dining. Their music choices were pretty rocking, so I suppose that's something to be grateful for. 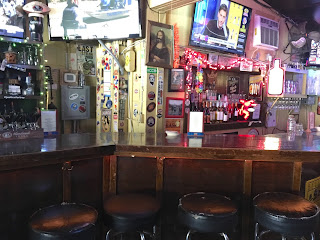 The menu at Neighbors is mostly an assortment of barbecue and Tex-Mex, with a few salad options tossed in for the lady-folk. I ordered a six-pack of mild smoked wings for a quick appetizer, followed by their pulled pork sandwich lunch special. All of the specials automatically come with chips, and since a substitution apparently wasn't possible, I added on a side of potato salad as well. Because the only thing better than meat and potatoes is meat and double potatoes. 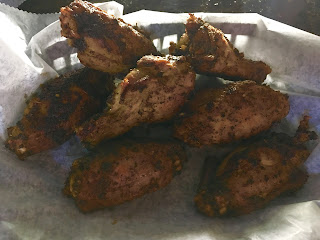 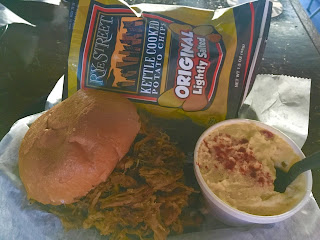 My wings came out piping hot, which generally a good sign. These little fellas are dry-rubbed and smoked on a combination of hickory and apple wood for about five hours, and although that sounds great in theory, I couldn't really pinpoint any smoke here. The flavors I did find, however, were very savory, with almost an extra-peppery Old Bay seasoning thing going on. The chicken was rather tender, but the skin, while flavorful, could have been a little more crispy for my liking. I suspect that the excessive powdered spices in their dry rub prevented it from crisping up properly.

I had my option of barbecue, salt and vinegar, or jalapeño chips, but I stuck with regular. Super adventurous, I know. Not being overly excited about run-of-the-mill bagged chips, I simply took them home to include with another day's lunch. The potato salad was exceptionally thick and viscous. There wasn't much in the flavor department, but at least they tried to spruce things up with a dusting of paprika. Spicy Hungarian paprika may have been a better choice though.

The massive pile-o-pork was quite literally spilling out of its toasty brioche bun. There was plenty of bark to go around, and it was spectacular. The meat itself was juicy and seasoned well. A moderate smoke level was just enough to make things interesting. Their barbecue sauce comes on the side by default, and there's no reason to add it to the already delicious pork. I appreciated the use of brioche, which was infinitely better than the unfortunately-standard grocery store hamburger bun that I normally find on my barbecue excursions. In my opinion, a little bit of crunchy slaw would have really completed this sandwich, but it was still impressive even without it.

If you can get past the visual and olfactory shortcomings, the barbecue at Neighbors of Sylvan Park is actually pretty good, and certainly better than expected. But it's definitely not the kind of place you'd take a girl on date night, at least not if you intended on having a second date. Food-wise, Neighbors is probably more like a solid three and a half stars, but the awesome pulled pork was enough to spur my generosity today.

I had actually packed my lunch today, but when I found out that the Smoke Et Al food truck was at nearby Centennial Park, suddenly my leftover hotdogs lost their charm. 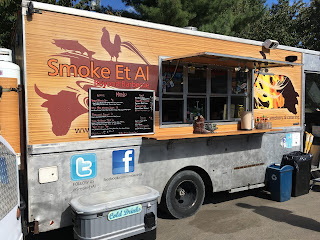 Smoke Et Al labels themselves as a "boutique smokin' food truck that goes beyond just BBQ." I'd say that's highly accurate. The gourmet barbecue food truck game is one that I hope to get into myself someday, so I was very interested to see what these guys could do with their mobile eatery. Judging by all of the enthusiasm that encircled them at Centennial Park, Smoke Et All seems to be doing quite well.

Their proteins and other ingredients are mostly all locally sourced, which means that what you're getting here is super fresh. My biggest dilemma was trying to narrow my lunch order down from the entire menu to just one or two items. In the end, I went with a BBQ Plate of brisket, fried pickled okra, and Yazoo mac n' cheese. I also added on an order of their illustrious Hot Ribs, because meats can be dessert too, right? 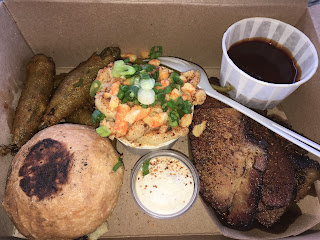 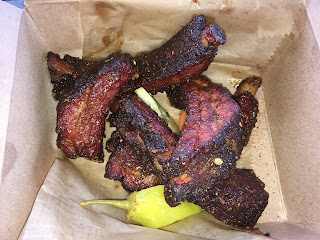 The okra was fried beautifully - crisp and lightly battered. Using pickled okra added a whole other dimension of flavor and acidity. It didn't have any of the usual dreaded okra sliminess either. Smoke Et Al serves this side dish with a traditional northern Alabama white barbecue sauce for dipping. The sauce was a perfect accompaniment, adding the right amount of creaminess to both counteract and compliment the acid. Their macaroni is made with Yazoo brewery's Gerst amber ale, a three-cheese blend, smoked Cheetos, and scallions. This concoction is one that you really need to try in order to fully understand and appreciate. The play between the gooey cheese and the crunchy Cheetos is amazing, and I loved the added bite of the green onion as well.

Smoke Et Al sprinkles their marinated, thin-sliced brisket with a little extra dry rub for good measure. The prominent smokiness was readily apparent upon first bite, and the flavors built with each bite thereafter. I also found a fantastic blend of spices on each sampling. The spices didn't detract from the natural beef flavors one bit, instead amplifying things nicely. Their brisket was tender as could be, and the fattier slices were very well rendered. It comes served with a side of barbecue sauce, but trust me, you don't need it.

Hot Ribs are Smoke Et Al's answer to the over-hyped Nashville hot chicken craze. These baby backs definitely pack a punch, but it's worth getting the hot sauce over mild. I saved them for last, both because of the impending heat level and the inevitable mess that I'd make of myself. The ribs are smoked, flash fried, tossed in hot sauce, and sprinkled with an array of spices. That I could still taste the smoke through the sweet/spicy sauce really says a lot. The meat was cooked just right, too: tender enough to come off cleanly with each bite, yet not overcooked such that things were "falling off the bone". In short, they were spectacular.

There are a lot of brick-and-mortar joints who can't hold a candle to Smoke Et Al's barbecue prowess. As the British say, "Well done you!"