Somehow I neglected to pack my lunch today, and I was about to make a quick sandwich run when I noticed a flyer for Hot Chicks in my office breakroom. I was already intrigued when I thought it was just a chicken shack, even more so when I discovered barbecue on the menu! Hot Chicks was only a few blocks away from work, so I rolled the dice. 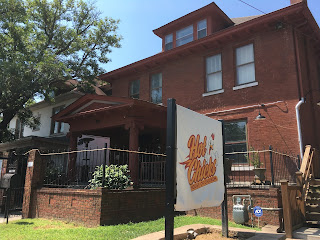 Hot Chicks occupies a renovated house near Nashville's Centennial Park in midtown. I went in the door that I assumed to be the main entrance, but I'm pretty sure I chose wrong. It's mostly still all house in here as far as the layout and ambiance goes, with the addition of a small bar area. Interior tables are a bit limited, with a nice outdoor patio space available to supplement. I left that for another day when the heat index was only in the double-digits. 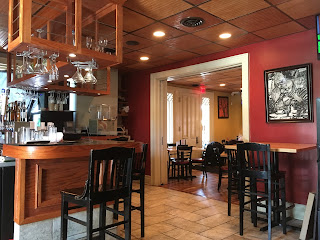 For a place that dubs itself the "House of Chicken," I was naturally expecting any and all barbecue options here to be, well, chicken. Nope. The barbecue at Hot Chicks consists entirely of pork shoulder and ribs. In fact, chicken makes up less than a quarter of their available entree items. The rest is a mix of shrimp, fish, beef, and pork dishes. Their online menu also seems to vary considerably from what I was presented with in-house. Confused but undaunted, I ordered a Pork Shoulder Plate (since ribs are only Friday/Saturday fare) with mac and cheese and potato salad as my two sides.

Despite being their first customer of the day (even half an hour after opening), my order took over twenty minutes to come out. That's a rather long time for a lunch order, especially in barbecue world with the theoretically-limited effort involved in tossing together a one-meat, two-side plate. The only other table had arrived at least five minutes after I did, yet they were served much sooner. That being said, my lunch did look awesome when it finally made its way to the table. 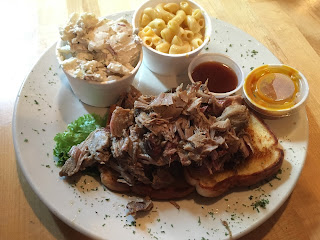 The mayo-based, German-style potato salad was served only slightly chilled, just the way I like it. Big slices of new potatoes, chives, and crumbled bacon made for a perfect combination. It was very savory and very creamy. Their large elbow pasta tasted fairly standard, although the gooey mac and cheese was the epitome of comfort food. It was also fresh and piping hot, but could have used a little elevation in the taste department.

Naturally, I requested my sauce on the side so as to properly test the pork's mettle. I found it tender and exceptionally juicy. There were plenty of smoke-kissed bits of pork scattered throughout, with only a mild smokiness upon closer examination. The dominant flavor was a slightly-acidic sweetness from their mop sauce, coupled with natural porky goodness. Some of the bark and fattier bites did pack more of a punch though. It's difficult to convert a Texan away from brisket, but this was pretty decent as far as pulled pork goes.

I was admittedly more impressed with the barbecue at Hot Chicks than I initially expected. They have a few kinks to work out, both in terms of service and food, but I definitely want to come back on a Friday to scope out their ribs. Were I writing a general restaurant review rather than strictly a barbecue critique, their slow and sloppy service probably would have knocked them down at least one notch. Fortunately for Hot Chicks, I am not The Restaurant Fiend. The Yelp/TripAdvisor version of this commentary, however, will be rated appropriately.

We came to Sedona, Arizona for a quick weekend getaway. The tall red rocks were as beautiful and majestic as the people were quirky. It's the only place I've been where you can take a rugged ATV tour and get your aura photographed afterward. With all of our pre-planned adventure and sightseeing complete, I coaxed my way into a last-minute stop in Rimrock for a quick barbecue lunch on our drive back to the Phoenix airport. 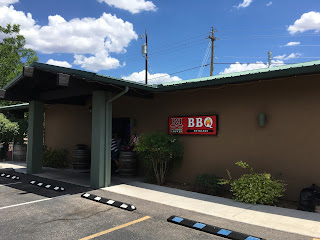 RR BBQ, or, more appropriately pronounced, "Double R", has sort of a southwest bistro motif going on. The entire place is chock-full of painted cow skulls, Native American and cowboy artwork, and, of course, tons of turquoise and copper.  It was all very clean and open and new. They also have a nice bar and a great outdoor patio space, although it was far too hot today to enjoy the latter. Double R makes good use of their scattered chalkboards, suggesting that the menu items and specials rotate often. 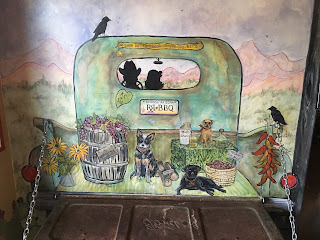 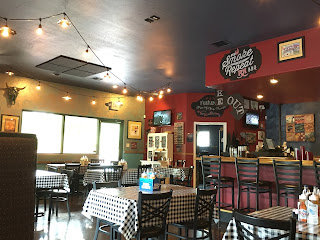 I was instantly drawn to the RR BBQ Platter, which comes with a quarter-pound of pulled pork or turkey (no poultry for me today), a quarter-pound of brisket, and a quarter-slab of baby back ribs. For my sides, I eagerly picked their smoked potato salad and pepper jack mac and cheese. This was definitely more food than I needed (a fact pointed out several times by my usually-correct wife), but I couldn't help myself. 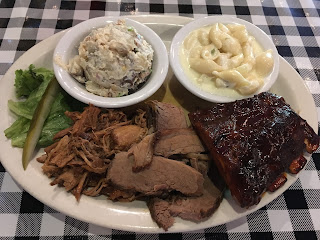 Double R's potato salad was absolutely superb. There was just enough mayo to hold everything together, letting the skin-on potatoes do most of the heavy lifting. This made it somehow creamy and chunky at the same time. It had a great texture from all of the green onions and pickles, which only had a mild acidity. The macaroni was a little runny for my liking, but tasted great. The spicy pepper jack cheese added a nice zip, the downfall being that it's not really a cheese that's conducive to melting properly. I did appreciate the big shell pasta though.

The brisket came in the form of lean, thin-ish slices, but it was much more tender than I expected. I didn't find any visible smoke ring, making the only color a rather unappealing, dull gray. There was only a mild smokiness, and it could have really benefited from some extra spices and more bark.

My pulled pork was also very tender, but kind of watery, if that makes sense. I think they may have poured a liquidy marinade of some sort over the top, though I'm not entirely sure. Whatever it was, it didn't add much in terms of flavor. The pork had minimal seasoning, and there wasn't much smoke to be found either.

The baby back ribs were definitely the winner amongst this platter's meaty components. Here again, they were lacking more than minimal smoky flavors, but I did enjoy the light drizzling of Double R's sweet barbecue sauce. The ribs were tender and very juicy, and the meat stayed put until each subsequent bite. This is no easy feat when it comes to baby backs, so I commend them for that. The pork was also nice and pink, just the way I like it.

All in all, Double R BBQ was ok, but their four-star rating on Yelp and TripAdvisor is probably at least one star too high. Although, to be fair, they do rank fifth out of all five restaurants in this tiny community. I will say that my wife thoroughly enjoyed her Santa Fe Grilled Chicken wrap, which I suppose is bound to count for something.