I had swung through Whole Hog Cafe last week to pick up a gift card for someone, and, while waiting my turn at the counter, I had an epiphany. Somehow, in all of the times I've eaten Whole Hog, I'd never had their pork loin. This would not stand!

Since I was already in West Little Rock today, I thought I might try out their location on Highway 10. But sadly, pork loin isn't a part of that branch's menu, nor the other spot on Cantrell. North Little Rock would have been the next closest location that I hadn't yet sampled, and that was a bit far out of the way. So even though the Markham Whole Hog isn't my favorite, I wanted that pork badly enough to give them a second run. 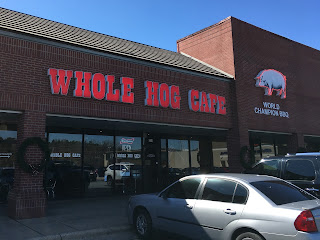 I arrived right at opening time, which meant there were only two other customers between me and the counter. This location is always clean and bright on the inside, with a yummy smoke-filled aroma. Super friendly employees and some great blues music also add to the fun, welcoming atmosphere. 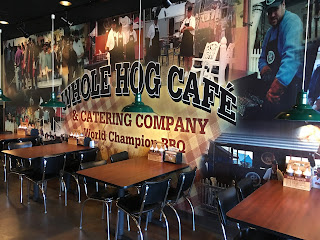 While I've eaten the pulled chicken from Whole Hog on several occasions, I've never had their full bird either, so a half-chicken was definitely on my radar today as well. The most economical way to get my desired meats was with a half-chicken plate, plus an a la carte helping of pork loin. I picked cheesy corn and potato salad as my sides, going the safe route with one and exploring with the other. 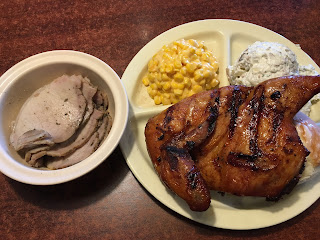 My potato salad was definitely heavy on the mayo, but that added to its flavor and its creaminess. The skin-on potatoes were finely diced, and I saw a lot of green bits that I couldn't identify by sight or by taste. I'm thinking maybe chives or parsley? Either way, there was plenty of seasoning and plenty to like about this dish. The corn, on the other hand, confused me a little. It was basically corn tossed in their macaroni cheese. Not that it was bad by any means, but my brain kept anticipating, and therefore wanting, actual pasta. I'm also not sure that the flavors meshed together as well as they had hoped.

The pork lacked any real smoke ring, and it looked sort of gray and lifeless if I'm being completely honest. Looks aside, the tender pork tasted great. I couldn't pinpoint any smoke, but there was a hefty, savory spice blend on the crust. The best way that I can describe this as thin slices of a pork chop. Although I liked it in general, I wouldn't exactly call it barbecue.

Nice grill marks made the hunk of poultry very appetizing. The crisp skin had a slightly sweet marinade on it, and the chicken below was very juicy, especially the dark meat. In my opinion, this was more grilled than smoked though, and it certainly tasted that way. The chicken was good in its own right, but it was not the barbecue chicken I had hoped for.

I'm glad that I tried the rest of Whole Hog Cafe's offerings, but I guess I should stick to their ribs and pulled pork from now on, preferably at the Cantrell location.

This weekend I needed a little "me time," and what better way to accomplish that than with some "meat time"? I set my sights on Breitweiser's down south in Benton, Arkansas. I couldn't find much info about this butcher shop, but I knew I'd find barbecue there, and that's really all the info that I needed. 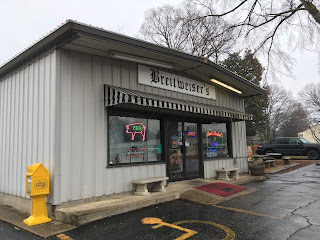 I arrived right around 10:45am, assuming that this kind of place would have things ready to rock by then. Sure enough, I smelled the sweet aroma of pit smoke through the morning rain. Breitweiser's is a classic small town meat market, plus they have a decent selection of deli meats and cheeses (although the latter two sadly aren't homemade). These guys also sell quite a few barbecue sauces and rubs, and beer, of course. 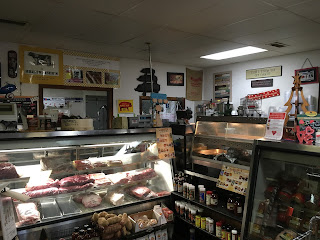 As you might expect, Breitweiser's sells their barbecue by the pound, but they were kind enough to make me up an awesome four-meat feast of brisket, chicken, sausage, and ribs with beans and potato salad. All this plus a Coke only ran me $18.00, which wasn't bad at all. The meats came from warming pans, and were then further heated up on a flat iron griddle. There isn't really a great spot to dine in here, so I ate things out in my truck. 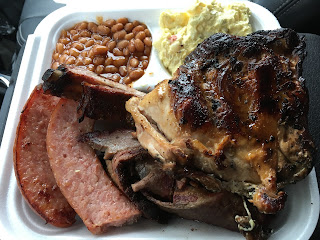 I started lunch off with some pretty standard baked beans, likely canned. There was a slight spiciness here and there, but it didn't linger. My potato salad was a mustard-based variety. They also have mayo-based potato salad available if you're so inclined, although my options were presented as "white or yellow." Flecks of dill and intermittent pickles and pimento made this an enjoyable side dish. It wasn't nearly as mustardy as its bright yellow color suggested, and that's a good thing.

The brisket had some great bark and an adequate smoke ring. I found good hits of salt and smoke in each bite. The beef was also tender and super moist, despite the leaner cut. What fat there was had been rendered down nicely and oozed flavor. The griddle added a good char as well, but I would have rather just had my brisket sliced fresh.

I don't know if Breitweiser's makes their own sausage, but I would guess not. It tasted more like Eckrich to me, and considering that all of their deli meats come from this brand, that's probably a safe bet. The meat was also finely ground, with no visible fat or seasonings. There was a good sear to the sausage at least, and a very snappy casing.

At first I had trouble discerning what part of the chicken I'd been served, but I'm about eighty percent sure that it was a breast. The chicken skin was nicely charred, so you can imagine my disappointment when I didn't taste much of anything beyond pit smoke. I did appreciate the smokiness, which is often lacking in barbecue chicken. It could have definitely used a good dusting of salt and pepper at a minimum though. The meat itself was cooked well and was fairly tender. Maybe dark meat would have fared better.

There was a great crust on my ribs, and they were incredibly smoky. A rosy smoke ring was also instantly visible. Not much seasoning here either, but the other flavors made up for things in this instance. The pork was very juicy and quite tender. While I couldn't stand to eat more than a few bites of the chicken, I found myself wishing I had several more ribs.

Needless to say, Breitweiser's was a bit of a roller coaster ride. Four-star brisket, two-star sausage, one-and-a-half-star chicken, and ribs somewhere between a three and a four. I'm not entirely sure what to do with all of that, so I'll just call this place "average" and move on.