This week I have been trying to slowly acquaint my little Barbecue Fiend with his daycare before I have to go back to work. On the first day, I intended to leave him there for an hour but I only lasted forty-five minutes, because I'm totally THAT parent. B & C Melrose is literally two minutes down the street from the daycare, so I thought that some awesome barbecue might be a great way to calm my nerves for a while on Day Two. 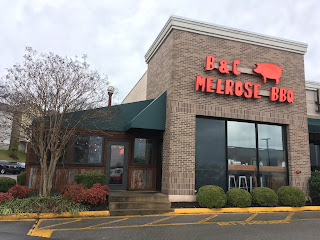 The dining room, which admittedly is not overly-spacious to begin with, went from empty to full within the first twenty minutes that this joint was open. By then the order line was also out the door, and if you've had the pleasure of eating B & C's barbecue before, then you know why. I was definitely glad to have gotten there early today. 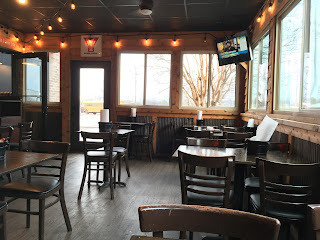 On my first outing to B & C, I created my own quasi-combo of ribs, brisket, and pulled pork. All three were phenomenal, but I wanted to mix things up a little on this return trip. I went with a plate of pulled pork over grits and an order of their smoked and fried wings. The lunch plates all come with two side dishes, and since mine already came with a heaping helping of grits, I narrowed things down to corn pudding and baked potato salad. B & C offers garlic cheese grits every day, but I decided to get my pork over their grit-of-the-day, which happened to be jalapeño on this occasion. 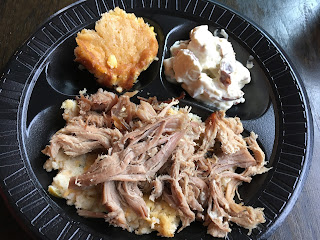 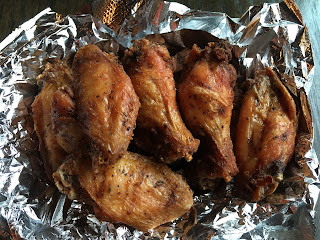 The baked potato salad came with skin-on red potatoes and plenty of mayo to bind them together. It was very creamy, although big hunks of pickle added a good crisp texture and some nice acidity as well. The corn was warm and comforting on this cold, rainy morning. I found the kernels to be neither mushy nor crunchy, but rather a pleasant al dente. It was also fairly sweet, as one might expect.

I was wowed by B & C's pulled pork last time, and today was no different. It was exceptionally tender and decently juicy. There was also a moderate smokiness and a nice seasoning to be had on each piece of bark. The meat carried a good salty savoriness in each bite, making it impossible to put my fork down. The pork was fabulous on its own, but today I decided to try it dipped in B & C's mustard barbecue sauce just for kicks. It was very zesty, with a mild spiciness as well. The sauce was a great addition to the meat, but even better was the combination of pork and grits. Their grits are light and fluffy and full of flavor. They had just enough jalapeño to spice things up without completely dominating or overpowering my palate. B & C has been rated "Best Grits" by the Nashville Scene, and there's a reason for it.

Although I only ordered and paid for a dozen wings, they brought out ten. Oh well, I certainly wasn't going to complain. Since I'm not the biggest fan of sauced wings, and in order to get a good feel for the natural flavors, I requested my wings dry. At first bite, I knew that I was in for a treat. Beautifully crisp and heavily-seasoned skin encased the juicy chicken beneath. Some might find them a little much in the salt department, but I thought they were just right. There was tender meat on each and every bite of each and every wing, not to mention a nice mild smoke level. B & C offers ranch and blue cheese for dipping, but do yourself a favor and use the mustard barbecue sauce instead. You'll thank me.

B & C helped me successfully last a solid two hours before I made the run back to daycare, a marked improvement over the first day.