Hutchins BBQ has been on my radar for a while now, especially given their recent inclusion in Texas Monthly's list of "Top 50 Barbecue Joints" for 2013. I don't travel north of Dallas too often (except to shop at Cabela's), so I decided to make the most of today's opportunity for some delicious Collin County barbecue. 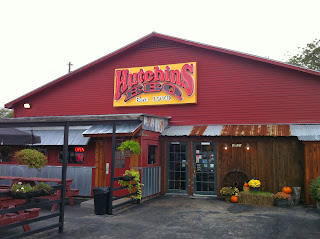 I caught the scent of delicious smoke as soon as I opened the door to Hutchins BBQ, which is always a good sign. The short, winding line to order ended at the knife men, who slice everything to order right in front of you. No surprises here. I eagerly watched the customers ahead of me receiving plate after plate of amazing meats and tried not to drool. 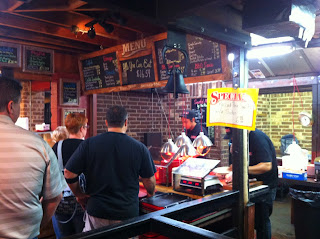 The interior at Hutchins is almost entirely comprised of wood, from the booths and tables to the walls, floor, and ceiling. I hope they regularly treat for termites, otherwise the entire place might just collapse under its own weight. The rustic decor was very welcoming and put me in the perfect mood for barbecue. 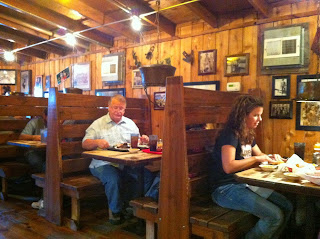 Having skipped breakfast this morning, I was fairly hungry. I also wanted to sample as many of their meats as possible, so I ordered a Three Meat Plate of sliced brisket, sausage, and ribs (the Texas Trinity). My meats weighed in right at a pound; I certainly had my work cut out for me. Their combo plates come with two side dishes, which are all set out self-serve buffet style. I picked the Texas beans and potato salad. 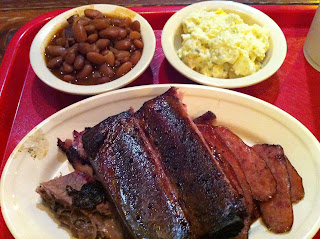 I really wanted to dive into my meat trio, but I thought it better to start with the sides. The potato salad was both creamy and crunchy at the same time. It had just the right amount of salt, with a hint of dill too. The pickles gave it a nice flavor, and I'm glad that it wasn't overly mustardy. The Texas beans were also really tasty. I found big chunks of tender brisket mixed right in. The seasoning blend was perfect - not spicy, but definitely not bland either. They were also nice and warm, which was a good counter to the dreary weather outside.

With my side dishes out of the way, it was time for the main attraction. The brisket looked gorgeous and had a deep black crust, with a thick smoke ring beneath. The meat was extremely tender and juicy and had an almost silky texture to it. I also found just the right amount of fat, which was perfectly rendered. There was a good amount of smoke and a very tasty seasoning blend. I seriously considered getting back in line to order another five pounds of the brisket, not to share with anyone, but to eat on the drive home.

Next was the sausage, which was also delicious. There was a good snap to the casings, though the smoke seemed to have penetrated nicely. I liked the medium grind to the meat. There was plenty of black pepper mixed throughout and just a hint of garlic. No store-bought sausage here, that's for sure.

Last came the big, meaty St. Louis-style spare ribs, which happen to be my favorite kind. To put it mildly, they were amazing! Just like the brisket, these ribs had a great crust. The meat was very tender, but properly stayed put until each subsequent bite. There was a great seasoning and lots of smoky goodness throughout. No sauce was needed here at all, and I didn't dare add any. The only downside to the ribs was that my combo only came with two.

At Hutchins, dine-in customers are treated to complimentary desserts. I was fairly full by this point, but I certainly wasn't going to pass on their generous offer. That would just be rude. I tried both the banana pudding and the peach cobbler. Sorry diet, better luck next time. 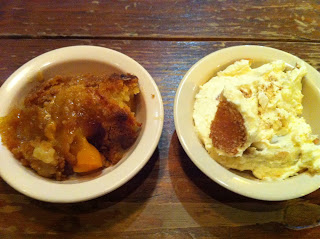 The 'nana pudding seemed to be a 50/50 combination of whipped cream and pudding, with a few bananas and Nilla wafers tossed in for good measure. It was really light and airy compared to my past pudding experiences. Their peach cobbler is made in a shallow baking sheet, so there was a lot of crust to be had. The peaches were most likely canned, but still tasted good either way. The cobbler was really warm and gooey, and was a great end to a great meal.

I was sad to leave Hutchins, but I guess all good things must come to an end sooner or later. Daniel Vaughn and the rest of the Texas Monthly crew definitely made a good call including this place in their list of immaculate Texas barbecue.