With its "Friday lunch only" business hours, getting to Cattleack Barbeque has been a tough row to hoe. Even then, they're only open from 10:30am until the food runs out. Today I was lucky enough to have my morning free, so I jumped at the opportunity to sample Cattleack's elusive 'que. 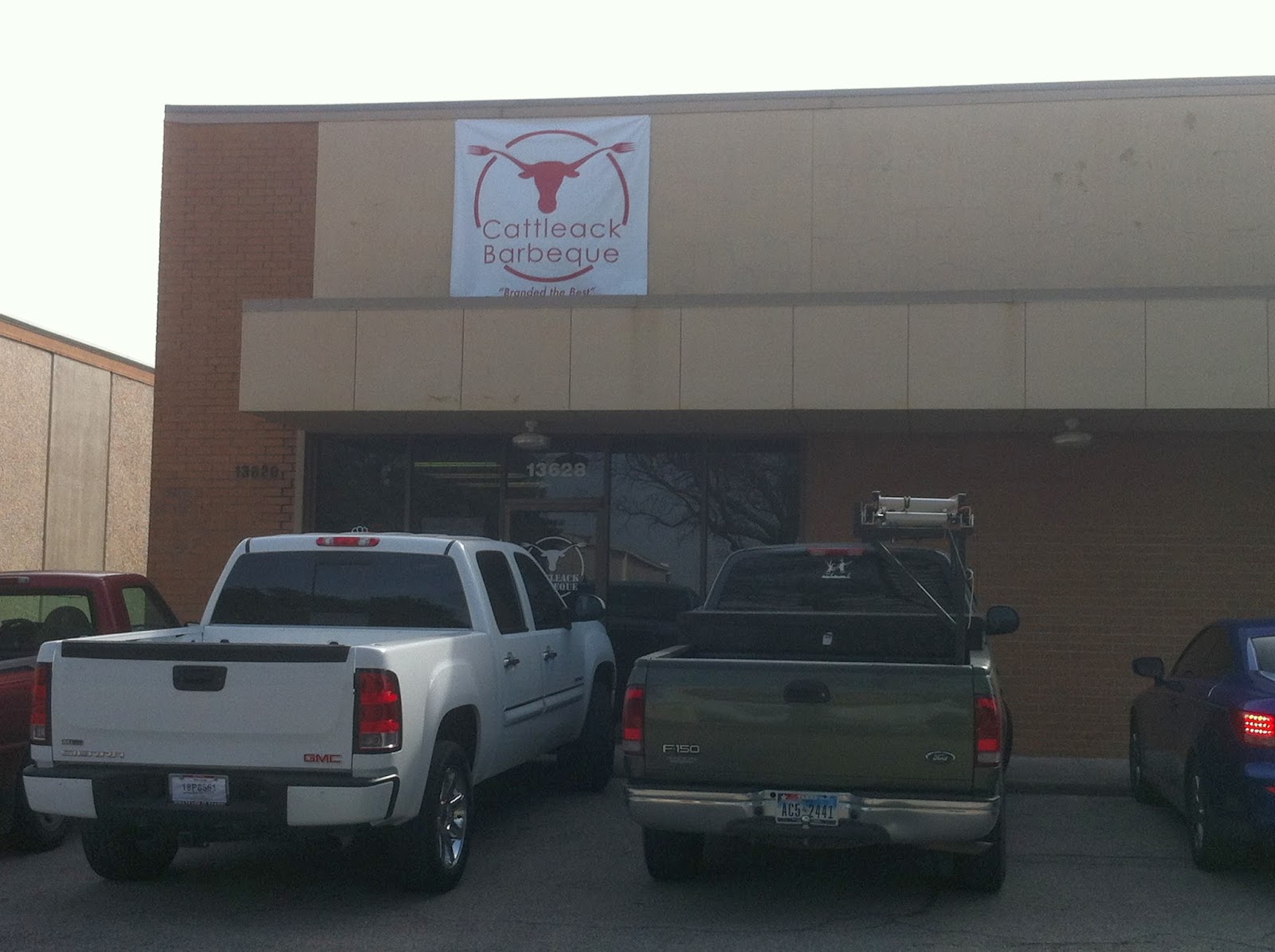 This part of town is home to dozens of furniture stores and also several warehouses. It's not the area where you'd expect to find a restaurant of any kind. Owners Todd and Misty David primarily run a catering operation, so their limited lunch offerings are take-out only. There is no dining area whatsoever, but there are a handful of folding chairs and picnic tables set up near the parking lot if you're so inclined.

I arrived at 10:20am, and there were already half a dozen people in line. The early bird gets the worm, and their customer base clearly isn't messing around. While I waited, my eyes zeroed in on the Igloo cooler of cold beer, which Cattleack offers to its customers free of charge. A few folks in line had no qualms about popping a top. If it hadn't been so early in the day, I probably would have taken them up on the offer too. 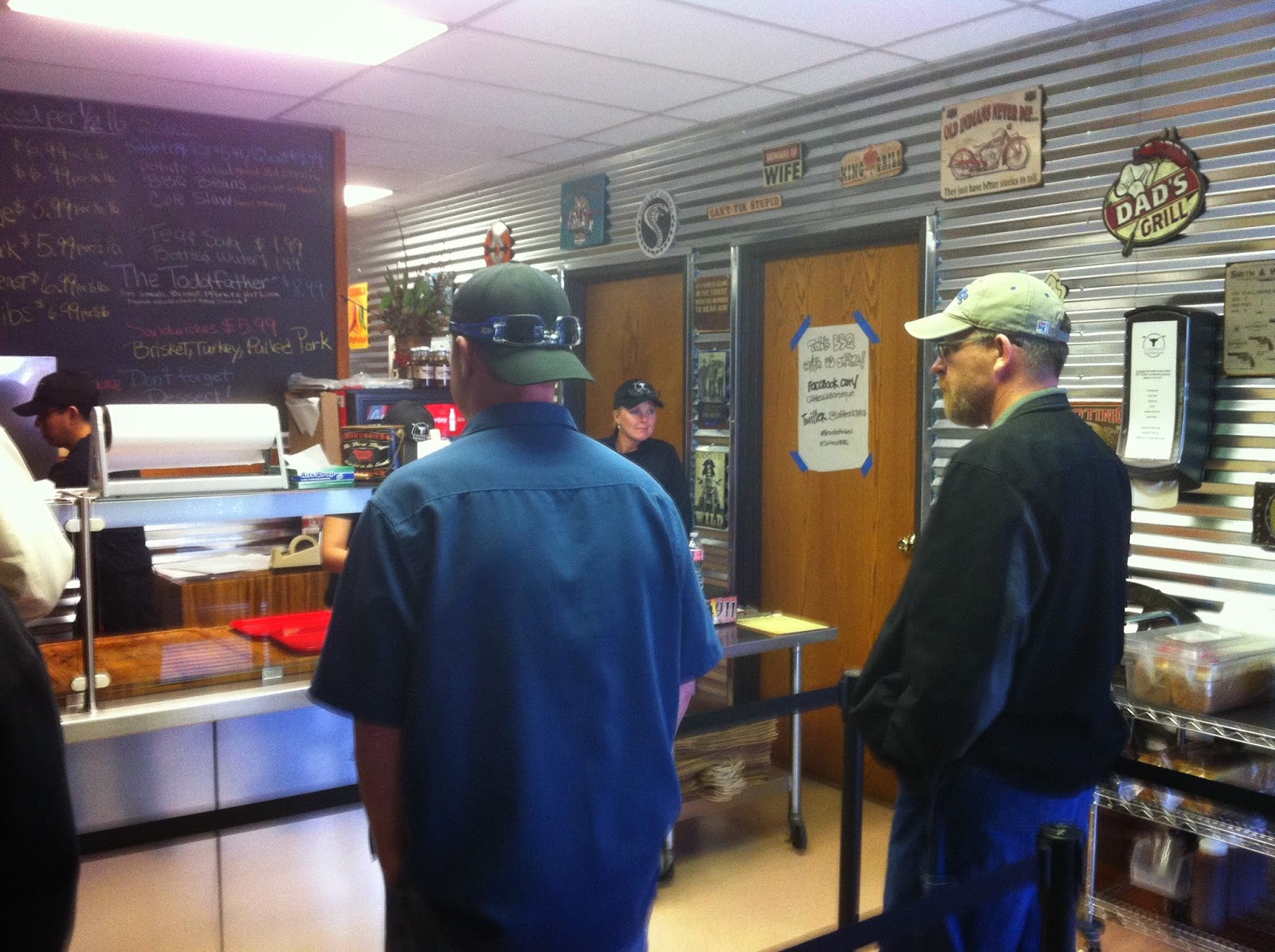 Their side dishes all sounded good, but today I was focusing on meat. I ordered myself a full array of smoked deliciousness: 1/2 pound of sliced brisket, 1/2 pound of homemade jalapeno and cheddar sausage, 1/2 pound of pork ribs, and one giant beef rib which weighed in at just under a pound. I had definitely over-ordered, but at least I'd have plenty of leftovers. At home, I plated a lunch-sized portion (well, lunch-sized for me at least) and saved the rest for dinner. 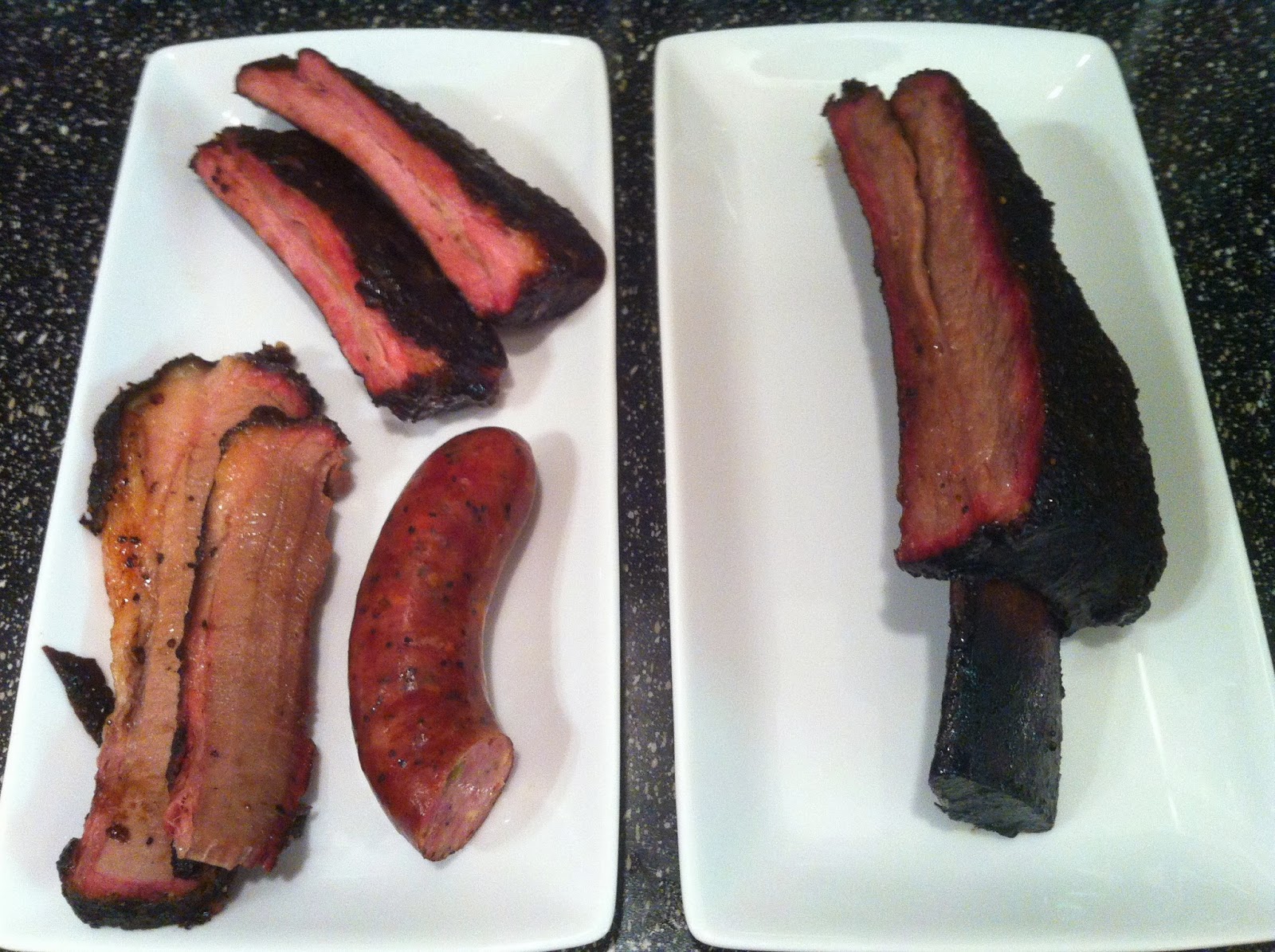 The brisket was up first. It had a great black crust and a decent smoke ring. I had asked for a mix of both fatty and lean slices, which they were happy to accommodate. The fatty slices were so tender and velvety that it was hard to keep a bite on my fork. The texture was very smooth and rich, almost like you were eating pate. A high fat content doesn't appeal to everyone, but it was nicely rendered and really enjoyable. Even the lean slices were very tender. I found a big hit of smoke across the board and a great seasoning on the crust too.

My meaty St. Louis-style pork ribs had a beautiful, solid black crust with plenty of visible pepper. The smoky hue went end to end, making it hard to call this a mere smoke ring. I bit in, and found quite a bit of smoke, which was no surprise really. The light glaze had a mild sweetness to it, but wasn't overly sugary. These ribs were tender, moist, and cooked perfectly.

I could see tons of cracked black pepper through the sausage casing. When sliced, I also found big chunks of jalapeno and cheddar. The casings were crisp and had a nice snap to them. I liked the medium grind on the meat, which leaned a little more toward the finely-ground side of the spectrum. The gooey cheese tempered the heat of the jalapenos quite well. The sausage had a good smoky flavor, but the spicy kick from the peppers stood out the most.

Three meats down, one to go. I saved the massive beef plate short rib for last, though it looked more like a Flintstonian-sized brontosaurus rib. At my request, I got an end cut for some extra bark, and there was certainly plenty of it to go around. I wasn't quite sure how to tackle this thing, so I just picked it up and chowed down. Wow, I was in heaven! Meaty, smoky, juicy. This rib had it all. There was a good fat marbling, almost like Kobe beef, which made the meat extremely tender. It also had a high smoke content and tons of flavor.

Cattleack puts a note in every to-go bag encouraging customers to review their food on any and all social media outlets. Todd and Misty really seem to love barbecue and are quite proud of their product. They should be. Even more impressive, they do it all with an Ole Hickory smoker. There seems to be some confusion about Cattleack out there in the blogosphere, with allegations that they use a gas smoker. On the contrary, theirs is in fact a wood-burning smoker, just as God intended. Gas is used to start the fire (understandably), but then it's au naturel from there. As a native Texan I've eaten my fair share of smoked meat, and I can honestly say that Cattleack's barbecue was some of the best I've had.