From time to time, my job takes me to random places throughout Texas. Once again it was necessary for me to make the long, tedious drive to Lufkin, nestled deep within East Texas. I decided to do some pre-trip research and find a good barbecue joint to try out along the way. Some brief googling led me to Bryan's Smokehouse, which had been recently renovated by critically-acclaimed chef Robert Irvine and his Restaurant: Impossible crew. I couldn't resist! 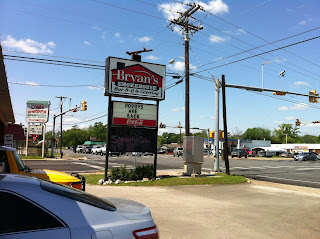 Apparently the local newspaper did a write-up about Chef Robert's March 2013 visit to Bryan's. You would think that the Bryan's management would want to play this up a little and use it to their advantage, but instead they only saw fit to laminate the article and stick it on the wall with Scotch tape. They didn't seem to be all that appreciative of the time, energy, and money that Chef Robert put into their restaurant.

Sadly, I found myself a little unimpressed with the renovation, although I don't know what it looked like before, so maybe it is an improvement. The walls were fairly bare, but I did enjoy the wagon wheel chandeliers and rustic metal wall art. The framed tools were a nice touch too. I liked the decor in general, but it just didn't seem to fit; it was a little uppity for barbecue. This isn't to say that upscale barbecue joints don't exist and even thrive under the right conditions, but I doubt Lufkin, Texas fits the bill for this. My initial research told me that Bryan's wasn't allowing cameras inside until after their episode of Restaurant: Impossible officially airs on Food Network sometime in May. Luckily, I've never been one for following the rules: 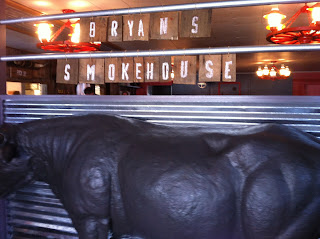 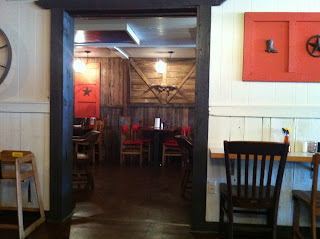 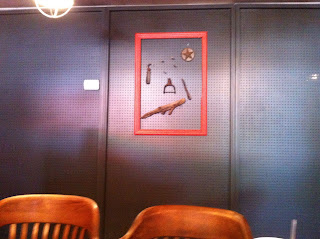 Given the upgrade and local publicity that Bryan's recently received, I was expecting a decent lunch crowd. There was only one occupied table when I arrived, and in the 30 minutes I spent there, only two other customers came in for lunch. This brought the grand total to six. Wasn't the whole point of the renovation to help revitalize this restaurant?

Having watched as many episodes of Restaurant: Impossible as I have, I'm assuming that Chef Robert's intention was for their chalkboard menu to change daily (or at least weekly) and feature specials. I doubt the menu changes at all. Actually, it was a little hard to decipher. I really wanted to sample several of their different smoked offerings, but I didn't see any combos listed on the menu. When I asked the girl behind the counter about the possibility of getting a combo, she quickly said that they had two-meat combos and looked at me like I was stupid for asking.

I ended up ordering a Two Meat Combo of sausage and sliced brisket, with potato salad and baked beans on the side. After ordering, I sat down to wait for them to bring out my lunch. Despite the lack of customers, it took over 10 minutes to get my food. All they had to do was slice the meat and stick it on a plate. I was a little irritated by the wait, but it did give me enough time to see the Orkin man coming in to inspect their pest control problems. They probably should have had him come after business hours. 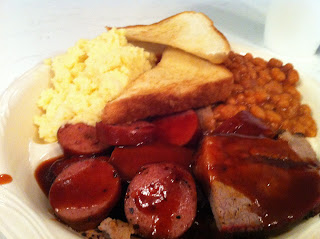 When my order finally came, I found myself a little disappointed with the plating. Everything was just slung onto a plastic Dixie plate. I've happily eaten delicious barbecue off of butcher paper plenty of times before, but I was certainly expecting something a little fancier given the decor and attempted upscale atmosphere.

Just before I dug in, I was held hostage for 15 minutes by the owner's father (I know because he told me). He was in the process of wandering around and filling up the salt shakers, which should have been done before they even opened their doors today. I got to hear all about the 32 years that he worked at the nearby paper mill. While I don't generally begrudge the stories and sage advice of my elders, I would have preferred eating my meal in peace. I guess he was bored.

Finally, on to the food. The potato salad looked like nothing more than mashed potatoes sitting on the plate, with no visible spices of any kind. I found absolutely no crunch from vegetables, and I'm not even sure there were any. Basically, it tasted like cold mashed potatoes with a little mustard mixed in. According to what I overheard from the owner, Chef Robert left their potato salad unchanged. That was probably a mistake on his part. The beans were chunky, mushy, and tasted no different than a can of Bush's baked beans. There was no pepper or spiciness at all. I don't know if Chef Robert modified their bean recipe, but I suspect not.

My sausage had big visible bits of cracked pepper, which was a good sign. As you can see in the picture, the meats came pre-covered in sauce. Had I known in advance I would have ordered it on the side, but I wasn't given that option. I liked the flavor of the vinegar-based sauce; it was just applied a little too heavily. The sausage was very finely ground, although I won't criticize them just because I happen to prefer a more coarse grind. All of the black pepper gave the sausage a nice kick, and the rest of the seasonings were pretty tasty too.

The brisket came with a beautiful black crust and a pronounced red (not pink) smoke ring. That being said, it was a big let down. I couldn't get a good grasp of the smoke level because the brisket was drowning in their potent, acidic sauce. It was also a little difficult to cut with the accompanying butter knife. Some pieces were ok, but most of the brisket was dry and tough. Even the fatty bites weren't very tender and juicy. The fat wasn't very well rendered either; the fatty slices had a half-inch thick strip of rubbery fat along the edge. Maybe they need a new meat supplier.

Sorry Chef Robert, but this place still needs a lot of improvement. It will be interesting to watch their episode of Restaurant: Impossible to see how my experience measures up to the before-and-after. My guess is that they've backtracked quite a bit since his renovation. Although, the best decor in the world can't make up for bad food and bad service. I hope I never have to go back to Lufkin for work (no offense), but if I do, I definitely won't be returning to Bryan's Smokehouse.

UPDATE (April 29, 2013): This morning I awoke to find a rather combative comment posted on my review of Bryan's Smokehouse Bar-B-Q. According to the name listed on the comment, it came courtesy of a "Lynn Marie Bryan." It only took about 30 seconds of Googling to uncover that Lynn Marie Bryan is the owner of Bryan's Smokehouse. In order to prevent her comments from being prematurely deleted, I have chosen to re-post them here. These comments are unabridged and unaltered:

"You are sad person and taking those pics was a Big Big Mistake you will no what I mean soon enough lol hope your evil ways pay off for you lol Bryan's smokehouse is a great great place Christian ran ,locally owned, they feed the hungry and help family's who are in need , donate to everyone who's in need , put kids thru church Camps and help the kid that are sick so you being ugly will only hurt you in the end you sad person !!!' Learn to only speak good things for a change be happy not a sad mad jerk"

1. The comments themselves seem to suggest that they are being posted by an uninterested third party, but they were most assuredly posted by the owner herself. Perhaps Ms. Bryan should have chosen a course of action other than posting such things from her own personal account.

2. When I mentioned the "no photos allowed" rule discussed above, this was something that I read in an online news article. There was no mention of such a rule posted on the websites for Bryan's Smokehouse, Food Network, or Restaurant: Impossible. There were no signs indicating such a rule inside or outside the restaurant itself. While taking pictures with my phone, I wasn't exactly sneaking around CIA style or trying to be clandestine in any way. In fact, I made no effort to hide what I was doing. Not once did anyone approach me and ask me to stop.

3. My review was based on my experience at Bryan's Smokehouse and my personal opinion of the food, service, etc. I don't make up lies just for the sake of having negative criticisms to post. To the contrary, I believe in being fair and giving credit where credit is due. In my review above, I mentioned several positive things about Bryan's. For example, aside from my personal preferences regarding barbecue sauce and coarse vs. fine ground meat, I stated, "All of the black pepper gave the sausage a nice kick, and the rest of the seasonings were pretty tasty too." If Ms. Bryan had bothered to read any of my other reviews, she would see several barbecue joints for which I didn't have one negative thing to say. Why? Because their food, service, and my overall experience there was spectacular and beyond reproach. If there had been more positive things about my trip to Bryan's, I certainly would have mentioned them.

4. I find it interesting that in her entire comment, not once did Ms. Bryan even attempt to defend any of the things that I actually critiqued, such as their food. While I certainly applaud the charity and generosity of any person or business, these things have nothing to do with their ability to prepare good, flavorful food or to serve it in a prompt and polite manner.

5. I can certainly understand the frustration that any restaurant owner must feel upon reading negative criticism of his or her establishment. However, if this is the way that Ms. Bryan chooses to address customer complaints (particularly in a public forum), it's not surprising that their business is dwindling.

UPDATE (July 2, 2013): I found more maniacal comments posted by Lynn Marie Bryan on another website, and I thought I should share. As always, these comments are unabridged and unaltered, despite the horrendous grammar and spelling.

"Seem to be some X employees posting some bad reviews which is funny ,X staff means they was fired for a reason mostly theifs , trash , drug users , or just dont have a pot to pee in So consider the sorce."