I've been jonesing for a good church picnic ever since my wife and I moved from Texas to Tennessee last year. We've attended some fun festivals and events here and there, but it's just not the same. Luckily for us, St. Patrick's Church in McEwen, Tennessee holds an annual picnic which was once heralded by The Guinness Book of World Records as the world's largest outdoor barbecue. How could I possibly resist? 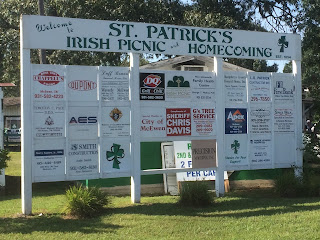 In order to raise funds for a new church bell, St. Patrick's held their first picnic in 1854, with pigs and sheep donated by local farmers. The event was such a success that church members turned it into an annual fundraiser for the church's school. Over a century and a half later, the picnic is still churning out barbecue that numerous publications have labeled as some of the best in the state. Clearly the folks at St. Patrick's know what they're doing. One thing that keeps the crowds coming back year after year is the legendary and secretive St. Patrick's barbecue sauce, the recipe for which is known only to one church member whose family brought it over from Ireland. I couldn't wait to try it. 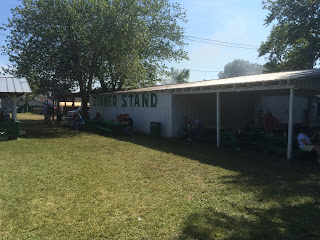 Each year, St. Patrick's serves up some twenty thousand pounds of hickory-smoked pulled pork to hordes of hungry picnic-goers. While McEwen's normal population is in the neighborhood of seventeen hundred, it's not at all unusual to see that number rise to twenty-five thousand during picnic weekend. To satisfy the massive crowds, church members and other volunteers man the smokers for twenty-four hours straight and start selling pork by 7:00am. Wow! They also had chicken halves for Friday's lunch, but sadly I missed out on that. 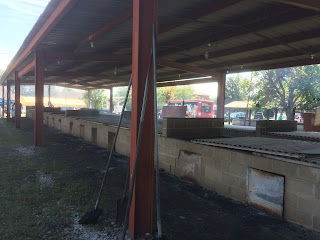 The Czech/German church picnics that I frequented during my Texan youth were primarily focused on things like fried chicken, polka, bingo, and beer. I was excited to see what wonders an Irish barbecue picnic would hold. In addition to the run-of-the-mill ring toss, fish pond, and cake walk-type games, there was some really great live music. We listened to the Maple Valley Boys for a while, then the Harpeth Band. They were both really talented, with a mixture of country and bluegrass styles. It wasn't polka, but it made for a fun afternoon nonetheless. 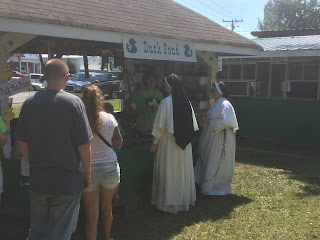 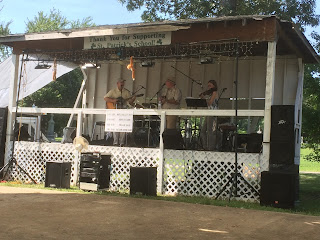 While I had initially considered getting a pulled pork sandwich or some barbecue nachos, I couldn't resist their $8.00 dinner plate of pulled pork, green beans, potato salad, coleslaw, dessert, and sweet tea. That was quite a deal, plus they had a fried chicken option for my wife, who isn't nearly the barbecue fanatic that I am. 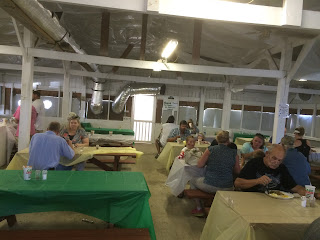 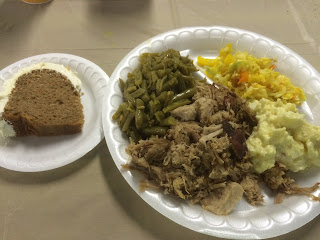 I was completely taken aback by the gigantic plate of food that I received for a measly eight bucks! The potato salad was really delicious, with a great crunch from all of the pickles and onions. Its base was a mustard/mayo combination, which provided a nice mustardy flavor without being completely overpowered. Unusual color aside, the coleslaw was rather excellent. According to some after-the-fact information given to me by one of my readers, the yellow color in their slaw comes from turmeric. This is also most likely the source of the spiciness that caught my attention every now and then. Mayonnaise-based coleslaws are not my favorite side dish, so this was a welcome change of pace. Although the green beans obviously came from a can, the addition of spices and pork transformed them into something homemade.

Despite being cooked in absolutely massive quantities, the pulled pork was phenomenal. It was much smokier than the majority of pulled pork that I've encountered. The meat was also very tender and juicy. The seasoning was simple, but just right. The pieces of bark, of which I found plenty, were even tastier. This was definitely some of the best pulled pork that I've had. I'm not generally a big fan of barbecue sauce, but I really liked this one. The tomato and vinegar sauce had a good kick and a nice acidity. St. Patrick's also sells this stuff by the bottle, and it's clear why.

For my dessert, I ended up picking what I thought was carrot cake, but which turned out to be a sort of gingerbread-esque spice cake. It was moist and delicious, with a great punch of cinnamon and nutmeg. The homemade buttercream frosting was sweet and perfectly whipped. I wish I knew which of their parishioners had made this amazing cake so that I could thank them in person.

My wife wanted to grab a snack before we left, and I was in complete agreement. Although her cinnamon and brown sugar funnel cake looked fabulous, I wasn't really in the mood for anything sweet. I certainly didn't need it, but I threw caution to the wind and picked up a pulled pork sandwich for my snack/early dinner. 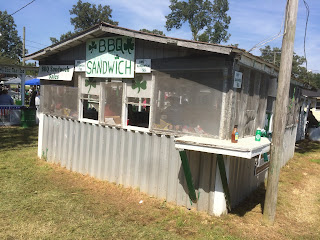 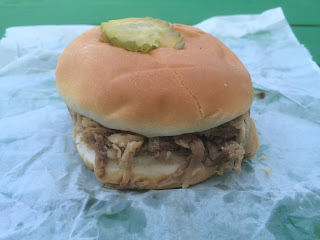 This sandwich was absolutely packed with pulled pork in quantities that rivaled my prior lunch plate, and it was just as tasty. No sauce was needed here either, but the pickles did add some nice sour notes. I ended up with even more bark than in round one, and I loved every bite.

The only bad part to our day was having to make the hour-and-a-half drive home on an incredibly full stomach. We will definitely be attending the 2016 picnic, and next time I'll come prepared to bring back several pounds of St. Patrick's delicious pulled pork!