I had a few errands to run on the North side of Nashville, so I made the most of things and added some barbecue to my to-do list. After seeing Hendersonville's Center Point Pit Barbecue featured on Diners, Drive-Ins & Dives, I had high hopes for today's meat-filled adventure. 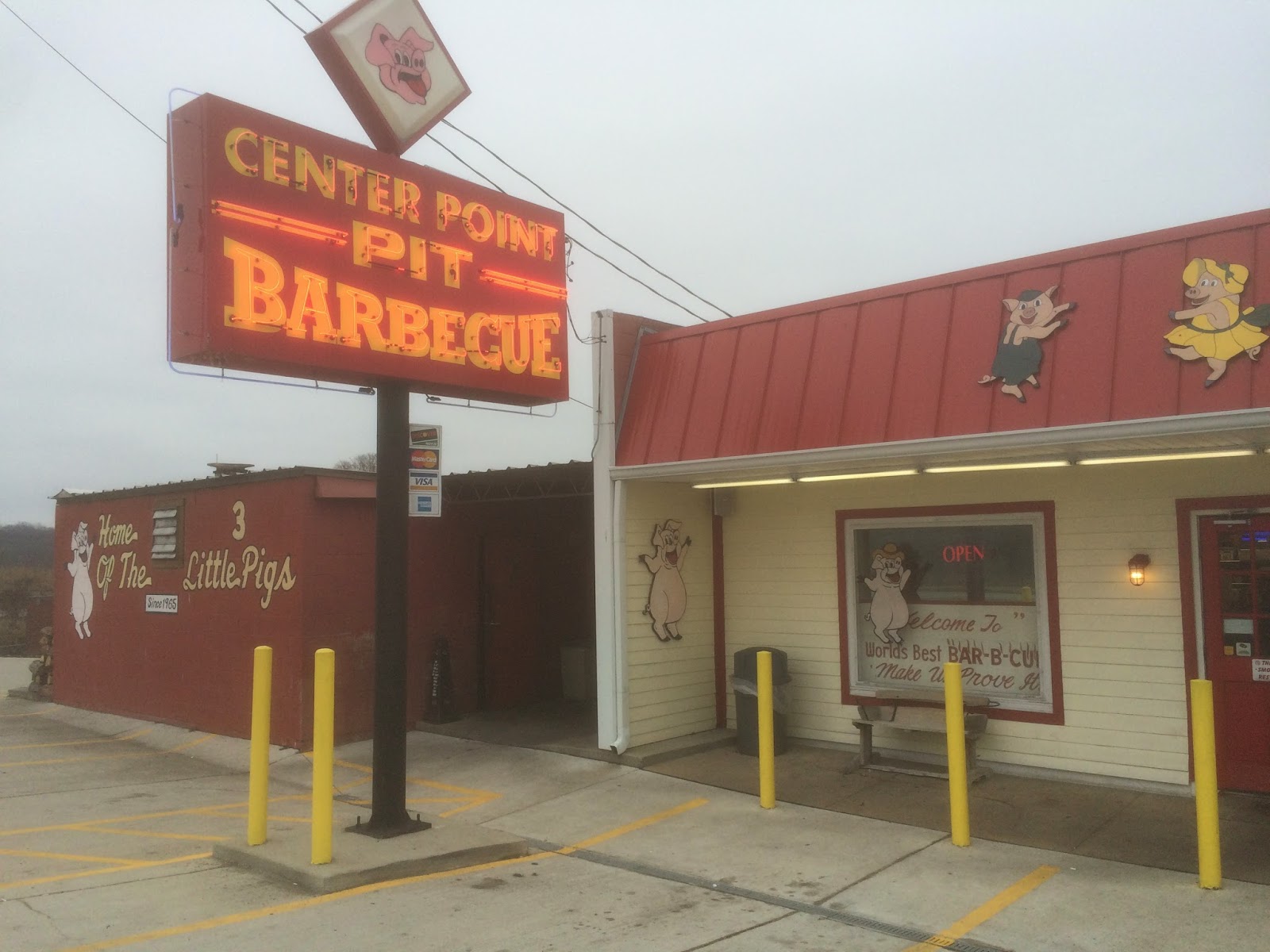 To my surprise, there was only one other vehicle in the parking lot when I rolled up at 11:30am. Oh well, more barbecue for me. Center Point has been in operation since the mid-60s. They have a rather interesting setup inside, which probably made more sense back in 1965. There is a combination of soda shop counter seating and a raised bistro-style section up front, with a small traditional dining room in the back. The front section has a good view of the kitchen, so I sat there to observe these guys in action. 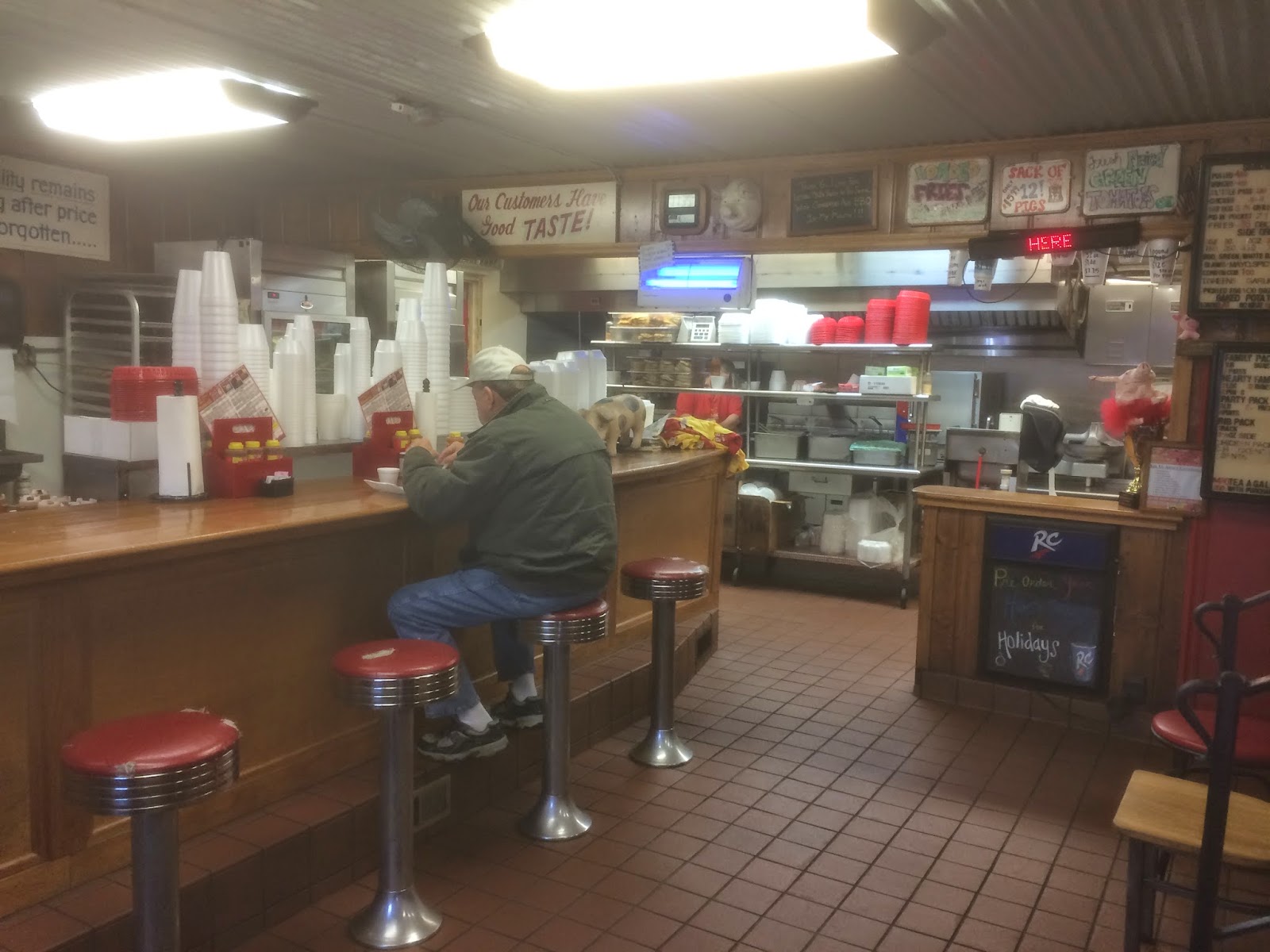 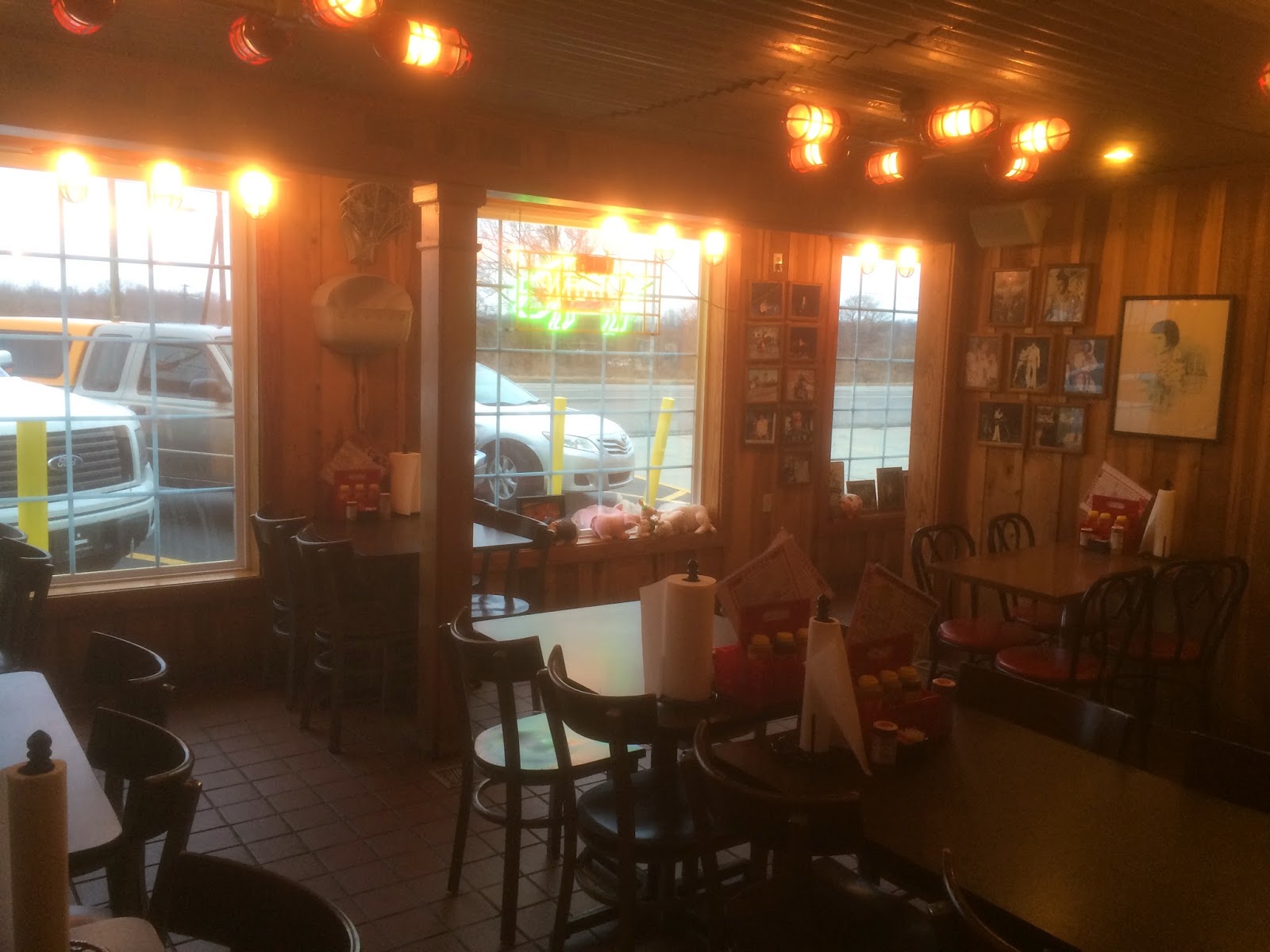 One of Center Point's specialties is the Fried Green Tomatoes appetizer, which comes topped with yum yum sauce, sour cream, and chives. This seemed like a great way to warm up my palate. I had no idea what yum yum sauce was, but I was sure it would be amazing. 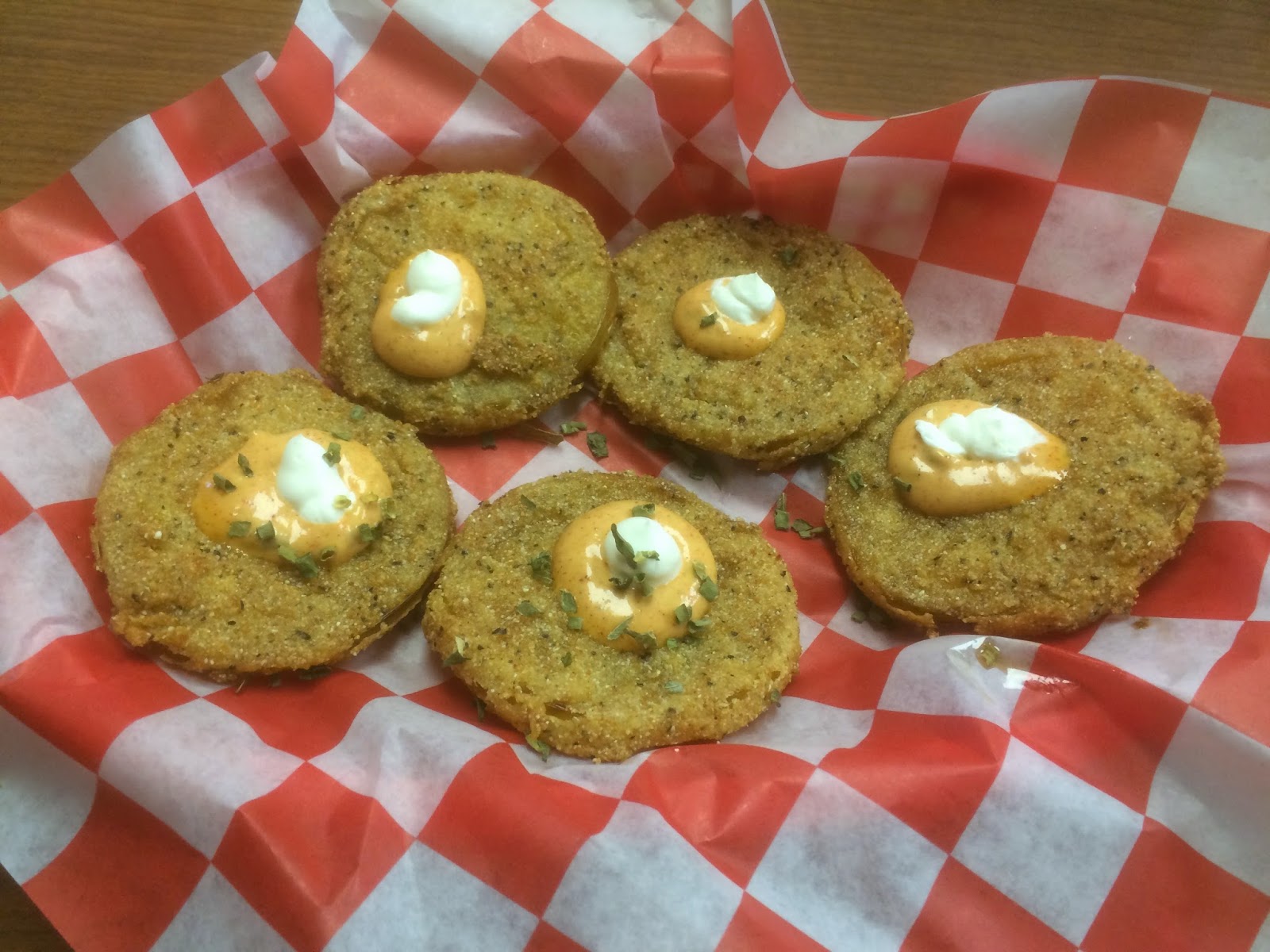 As expected, the fried green tomatoes looked spectacular. They were piping hot and fresh from the fryer, complete with crisp seasoned cornmeal batter. Center Point's yum yum sauce was as delicious as its name suggested, but I'm pretty sure it's just a close cousin of remoulade. The sour cream tempered the heat of the yum yum sauce nicely and also paired well with the acidic tomatoes. This was definitely a good way to get things started.

The only combo plate on Center Point's menu was a Pit Master Special, which comes with three meats of your choosing. For mine, I picked brisket, pulled pork, and ribs. There was a note on the menu which said that smoked hot sausage could be added for only $2.00 more. As tempting as this was, an appetizer and a three-meat plate was already sure to push my appetite past its tipping point. Maybe next time. Center Point's plates also come with a cornbread patty and two sides. The Southern-style potato salad and the white beans both sounded like good additions. 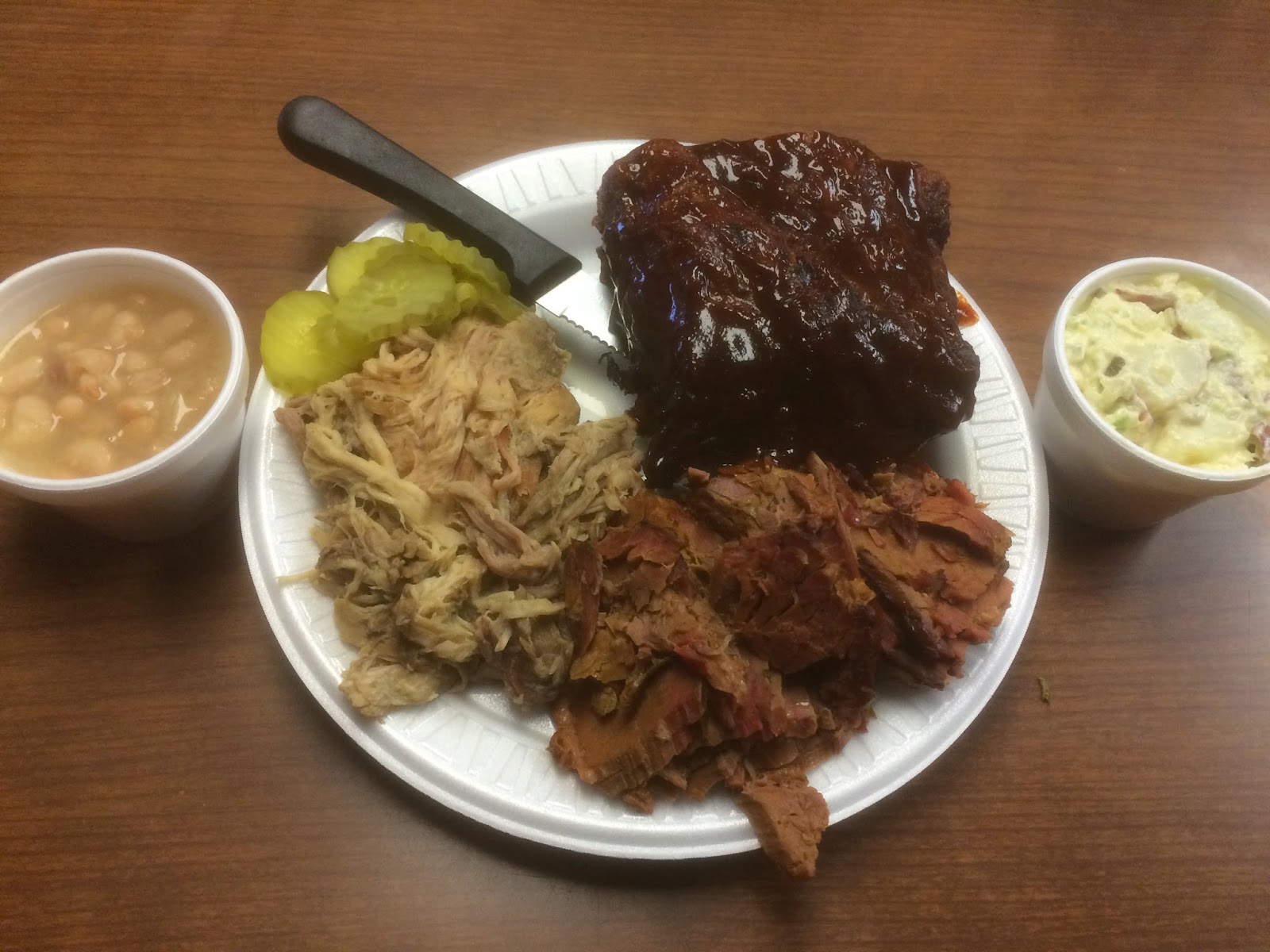 I generally start with the side dishes before diving into the meat, so why break with tradition? The potato salad was very good. I could really taste the pickles and onion, both of which added a pleasant crunch. It was also mayo-based, which I greatly prefer to the mustard variety. This was only my second time trying white beans. Thankfully, these were far less soupy than my first encounter. The beans were cooked just right: past al dente, but not mushy. I also enjoyed the mild seasoning, which let the natural bean flavors stand out.

Sadly, my brisket came out chopped. Well, that's not entirely accurate. The brisket on the very bottom of my pile was still in slice form, so I guess the rest just crumbled during the plating process. I'm not sure which is worse. At least I could see plenty of chopped red smoke ring scattered throughout, but I would have liked some bark, too. There was only a slight smoky flavor to be found. Some pieces were decently tender, but most of my thin, lean pieces were a little dry. The meat fell apart at the slightest touch, which told me that it was likely overcooked. Clearly this wasn't a Texas brisket.

Unlike the brisket, the pulled pork was rather monotone. I couldn't find any bits of bark anywhere here either. It was also quite bland and a little stringy. I didn't taste any smoke, so I decided to try some of their barbecue sauces out of pure necessity. The Sweet Surprise sauce definitely jazzed things up a bit, with a good kick on the back end. The Mild Barbecue Sauce was ok, but not as good. I left the third barbecue sauce alone and just moved on to the ribs.

When I ordered, I had asked for barbecue sauce on the side. My waitress assured me that all of the sauces were just on the table to be added as I saw fit. You can imagine my confusion and disappointment at being served sauce-covered ribs. Thankfully they provided an actual knife so that I could cut them apart. It took more effort than expected to slice through the crust, but the meat below was surprisingly tender. The ribs were cooked well, with just a slight tug needed to remove meat from bone. The thick sauce was rather spicy, such that I couldn't taste any smoke there might have been, or really anything else other than capsaicin.

In my opinion, $31.00 is too expensive for an iced tea, an appetizer, and a three-meat combo, even if the portions were fairly large. My three-meat combo plate was almost $20.00 by itself, while most places I've been charge somewhere in neighborhood of $14.00-15.00. Interestingly, the menu link on Yelp.com has outdated pricing, and the menu on Center Point's own website has the prices redacted. Chalk this up to inflation or the ever-rising cost of meat if you like, but I managed to find a menu picture from 2011, and the price of their three-meat Pit Master Special was $16.99 even back then. I'll end my pricing rant with a suggestion. Perhaps if Center Point wouldn't remove all of the delicious bark and fat from their brisket, then it wouldn't take nearly as much beef to fill up a plate, and barbecue lovers like myself would be much happier, too.

The barbecue was almost passable, although I'd honestly say that the best parts of my meal were the meatless appetizer and sides. I really agonized over my rating for Center Point Pit Barbecue. When I find myself struggling to find enough positive attributes to justify even an average rating for a barbecue joint, that speaks for itself. The fried green tomatoes and the side dishes were all fantastic, but the carnivore in me just can't overlook subpar meat.

UPDATE (January 26, 2015): Just to satiate my own curiosity, I decided to investigate pricing at other Nashville-area barbecue joints which offer three-meat, two-side combo plates of brisket, pork, and ribs. Of those joints whose menus I was able to find online, only eight offered this sort of combo. One of those offered the combo as a full pound of meat and specifically stated that it was meant to be shared by two people ($24.00), so I took that joint off my count. The remaining seven barbecue joints had three-meat combos which ranged in price from $11.50 to $20.00, with $15.18 being the average price. I also found two other joints offering four-meat combo plates for $16.29 and $18.99 respectively, both of which would be cheaper than a meat trio at Center Point. Although Center Point didn't have the highest priced three-meat combo, it came in a very, very close second and outpaced the third-highest joint by about $3.50.