I'm rarely driving through Giddings at the right time to stop by City Meat Market, but today I was in luck. Even though I had just eaten lunch, there was no way I could pass up the chance for some more top shelf barbecue. 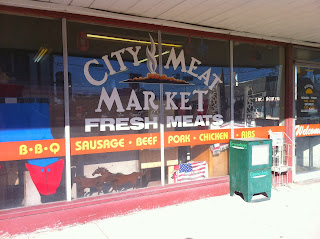 City Meat Market has made Texas Monthly's list of the Top 50 BBQ Joints twice in a row now (2008 and 2013). If you're used to the fast-paced urban lifestyle, don't go into City Meat Market expecting Whole Foods. In terms of the actual restaurant, this little spot is mostly just a meat market with some barbecue on the side. Although, I must admit that the smell of delicious pit smoke does make me feel a little lovey-dovey, so perhaps there is some romantic ambiance after all. 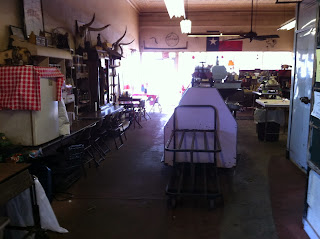 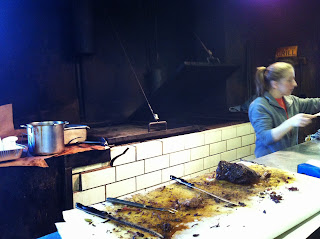 The barbecue part of this venture is situated way in the back near the pits. It was just a little before closing time when I arrived, so all they had left was some pork butt and fatty brisket. Perfect! I got a quarter-pound sample of each, as well as a small side of potato salad. There were 2.5 hours left between me and Dallas, so I took my food to-go. I saddled up and unwrapped the butcher paper to admire my $6.00 worth of meaty goodness. 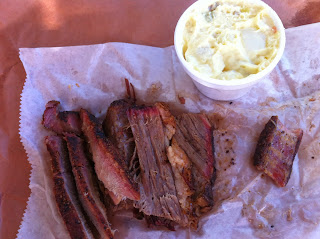 The potato salad had a great crunch from the plentiful veggies. It wasn't overly mustardy, which I appreciated. There was also a slight sweetness to the potato salad that made it very pleasant to eat.

My brisket had a very pronounced smoke ring and a great black crust. There was a good punch of both seasoning and smoke in each bite. It was so tender that the brisket quite literally melted in my mouth. There was a high fat content, but it was all rendered perfectly. I found absolutely no reason to ruin the meat with sauce. By the time I finished my sampling, I regretted not ordering several pounds.

The pork butt also had a nice crust to it. I found even more seasoning here, and all the black pepper gave it a great bite. There was also a good smoky flavor throughout. I initially thought that the pork looked kind of dry, but it was definitely tender and juicy. I guess looks can be deceiving.

I can only imagine how phenomenal their barbecue is at peak hours. If you find yourself in Giddings for some reason, City Meat Market is absolutely worth the stop.