My in-laws were visiting this weekend, and we needed something to entertain them. It was time once again for the annual Taste of Dallas food festival down in Fair Park. This seemed like a great way to showcase some of what Dallas-area restaurants have to offer, despite the sweltering July heat. 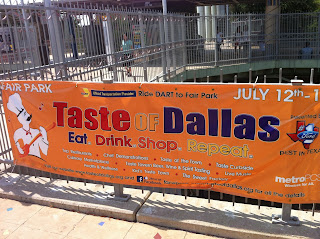 We live within walking distance of Mockingbird Station, which makes the DART train ideal for traveling to Fair Park. The train stops right at the entrance, so we were able to avoid any potential parking difficulties. Tickets are $10.00, and I couldn't find any discounts available online. I think there were Groupon discounts in years past, but no such luck for 2013.

The official website for Taste of Dallas says that booth tastings are priced from $1.00 to $3.00 each. However, I didn't really see anything besides $3.00 samples. As you might expect, my main focus here was smoked meat. There were about ten different options for barbecue this year, and I managed to sample seven of them. Enjoy! 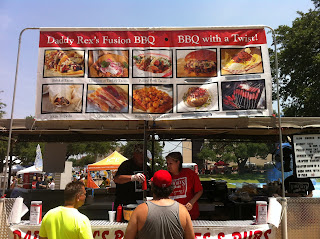 Daddy Rex's was the first barbecue vendor that we came to. Some basic Googling told me that their restaurant is based out of Anna, Texas, which looks to be a small town about halfway between Dallas and the Oklahoma border. They describe their food as "barbecue fusion," which mostly just took the form of barbecue tacos. I opted for a Brisket Taco, which comes topped with their homemade coleslaw. 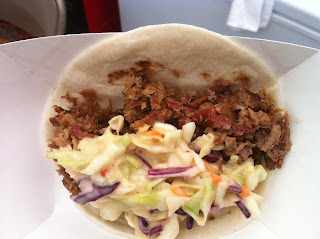 The brisket here was basically shredded, not chopped. The seasonings were good, but I couldn't find any smoke. Despite my general dislike for coleslaw, it really worked here. The slaw was slightly spicy, and added a good crunchiness to the soft shredded meat. I doubt I will be driving all the way to Anna, Texas to try their full menu, but I'm glad I got to sample Daddy Rex's. 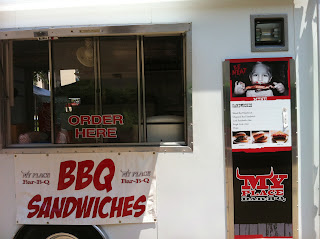 My Place Bar-B-Q wasn't one of the vendors I had seen on the official Taste of Dallas website, but I certainly wasn't going to pass it up. It appears that My Place is a staple of Muskogee, Oklahoma, although their presence at Taste of Dallas may suggest an expansion into the Lone Star State. I decided to try their Sliced Beef Sandwich. 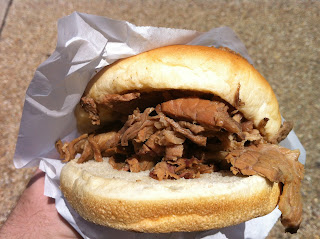 This was one of the largest portions of food I received at Taste of Dallas, but quantity can't take the place of quality. What I ended up with was gray, flavorless meat on a grocery store-style hamburger bun. There was no smoke at all, and not even a hint of bark on the meat. I found a pinch of salt, but no other noticeable seasonings. My Place Bar-B-Q was pretty disappointing, and I hope they stay north of the Red River where expectations for barbecue are presumably lower. 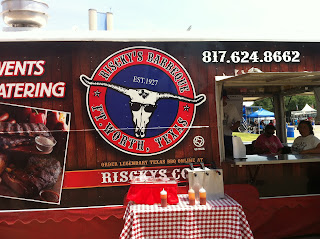 I've had Riscky's on several prior occasions, so I was curious to see how their food held up against the harsh festival conditions. I usually eat pork ribs from Riscky's, but this seemed like a good opportunity to try their beef variety. I ordered a sample of Beef Ribs, which was reasonably priced at $3.00 for two bones. 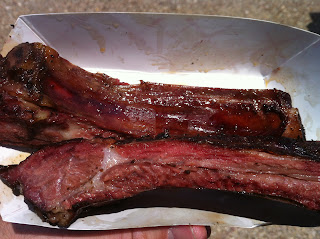 As much anticipation as I had for Riscky's beef ribs, they were a pretty big let down. I found a good crust on the ribs, but the meat itself was gristly and rather tough to eat. It took significant effort to remove meat (well, meat plus connective tissue) from bone, and even then the meat wasn't very tasty. Their seasoning blend was ok, although there wasn't much smoke to be had. Riscky's usually serves up pretty legit barbecue, but I guess they haven't quite mastered the mass production of smoked meat. 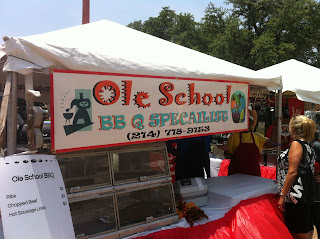 Ole School BBQ seemed more like East Texas-style barbecue, so I wasn't expecting them to have spectacular brisket. That being said, if there's one thing that East Texas does well, it's hot links. It didn't take much decision-making for me to settle on an order of their Hot Sausage Links. 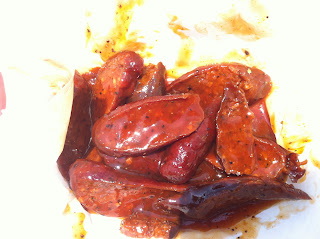 In true East Texas form, my hot links came drowning in sauce. The pre-sliced links had a great spiciness to them and a good snap to the casings. The sauce itself had a nice acidic flavor, but it was too thick and was applied way too heavily. I think I'll stick to Central Texas-style barbecue if at all possible. 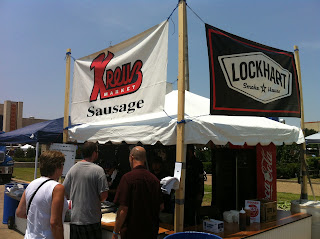 Lockhart Smokehouse has some of the tastiest barbecue in The Big D, so I was anxious to introduce my in-laws to their magnificent smoked meats. The only options they had for the Taste of Dallas samples were Brisket and Kreuz Sausage. As much as I love Lockhart's sausage, I couldn't resist the Brisket. 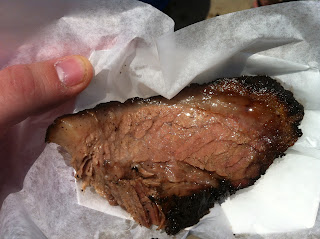 Even though it was a much smaller portion than I'm used to from Lockhart, the brisket was delicious as always. The seasoning and smokiness were both fantastic, and the meat completely melted in my mouth. The one downfall was the fat. I always prefer fatty brisket over lean, but the fat level here was pretty high, even for Lockhart. The fat also wasn't as translucent as it should have been. The sample I received wasn't quite on par with Lockhart's usual food, but I'll cut them some slack given the venue. 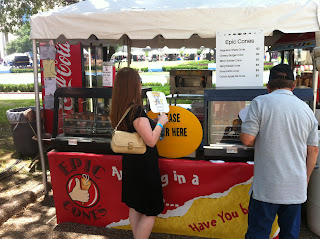 I was really looking forward to sampling Epic Cones, especially since I still haven't found the time to try their storefront location in Deep Ellum. The idea of meat-filled cones was ingenious and seemed like a great new vehicle for barbecue. Naturally, I gravitated toward their BBQ Brisket Cone. 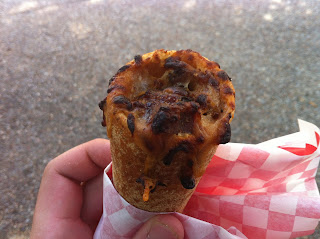 My sample-size cone was much smaller than the ones I'd seen advertised online, but that was probably a good thing. I saw some good crust on the meat, although most of the flavors were masked by massive amounts of gooey cheddar cheese. This also precluded any hope of tasting smoke. For some reason I was imagining a waffle cone, but the cone itself tasted a lot like pita bread. Epic Cones has a really interesting concept, which I think would work better as street food than as an actual restaurant. 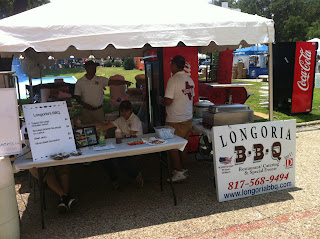 I was getting pretty full by this point, but I definitely wanted to try out Longoria's BBQ before we left. Longoria's was recently listed as one of Texas Monthly's Top 50 BBQ Joints for 2013, which is a pretty impressive accomplishment. I had eaten enough sliced brisket for today, so I ordered their Smoked Brisket Sausage on a Stick, which sounded pretty interesting. 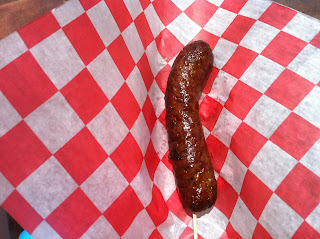 Their sausage was coarsely-ground and really tasty. There was a great flavor both from the seasonings and the smoke. The casing also had some good snap to it, which is always a plus. The meat itself was really tender and a pleasure to eat. I'm glad I decided to save Longoria's for last, because it ended up being a really delicious end to the day.