I knew I'd be up in Plano this afternoon for work, so I did some recon to find a good lunch spot nearby. Kenny's Smoke House was only a few miles away from my destination, and I've wanted to try it out for a while now. I don't find myself in Plano all that often, so I took advantage of the opportunity and headed on over. 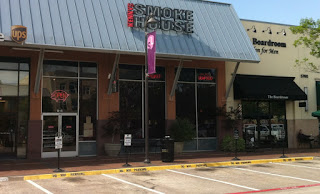 Kenny's is definitely more posh and upscale than your average barbecue joint. If it hadn't been for the smoky aroma, this place could have easily worked as a fusion restaurant of some kind. Just the other day, I found myself commenting on the pleasant unpretentiousness of Mac's Bar-B-Que in Dallas, with its humble decor and low-key atmosphere. Kenny's Smoke House is the polar opposite. 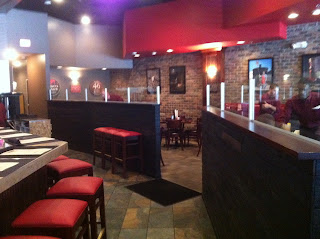 Shortly after sitting down at the bar, I managed to gracefully knock over my glass of sweet tea, making a gigantic mess in the process. The staff quickly swooped in to clean everything up. The bartender even took the blame and insisted that I stop apologizing, though I'm certain it was entirely my fault. Say what you will about this place, but their service is impeccable and the staff is extremely friendly.

There were several different items I wanted to try out, but I finally settled on The Kinahora sandwich: jalapeno cheddar sausage, chopped brisket, and pulled pork. I don't usually order sandwiches during my barbecue outings, perhaps out of principle if nothing else. However, The Kinahora was one of the few multi-meat offerings on their menu, so I thought I'd give it a try. You get one side with their sandwiches, and I decided that the Smoke House BBQ Fries seemed appropriate. When I gave my order to the bartender, she told me that I could do a "half-and-half" on the sides if I wanted to sample two different ones. I happily acquiesced and tacked on their Smoked Gouda Mac n' Cheese. 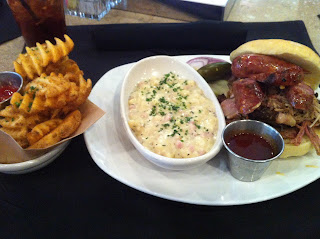 The fries came very heavily seasoned. They were a little spicy, though slightly sweet at the same time. I have gotten accustomed to bland, frozen, crinkle fries, so these were a welcome change of pace. Although the fries were quite tasty, the mac and cheese was incredible! I could definitely taste the smokiness of the Gouda. The diced ham mixed in was a nice touch, as was the drizzling of white truffle oil on top. Some places get a little heavy handed with the truffle oil, but this was just the right amount.

From the outset, my massive sandwich seemed nearly impossible to eat by hand, but I decided to give it a shot. I appreciated the homemade bun, though I really didn't expect anything less from Kenny Bowers. The jalapenos added a good kick, which was tempered nicely by the cheddar cheese. Each bite also emanated a decent amount of smoke. About halfway through, I decided to disassemble my sandwich so I could sample each meat individually.

The brisket was tender, moist, and loaded with spices. I couldn't see much of a smoke ring, but I could certainly taste it. I also found a great black crust on every bite. My preference is usually for sliced brisket over chopped, but this retained enough of a fat content to make up for things.

As for the sausage, there was a nice char on the outside and a good snap to the casings. It became even spicier once I had separated it from its meaty cohorts. I couldn't taste much smoke here, though I'm sure this was a byproduct of the added jalapenos and cheese.

Last but not least, I moved on to the pulled pork. Here again, it was tender and very juicy. The pork also had a great amount of smoke. The cut I got wasn't by any means lean, which I always enjoy. The fat was rendered nicely, and it added to both the tenderness and the smokiness of the pork.

The atmosphere in Kenny's Smoke House probably isn't for everyone, especially the more "rustic" of barbecue aficionados. Pretentiousness aside, Kenny's serves up some pretty legit barbecue.