After months of suffering through icy cold temperatures (well, cold for Texas at least), we were finally treated to a warm, gorgeous Saturday. My wife and I took this opportunity to check out the food trucks in Dallas' infamous Truck Yard. We had several interesting trucks to pick from, but I had my eyes on the smoked meat pizza for sale at Tutta's. 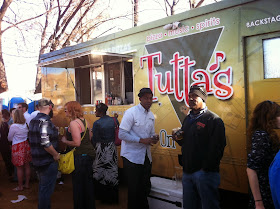 The Truck Yard is set up as a staging area for a rotating variety of local food trucks. It seems to be popular with bikers and coeds alike. If you enjoy the ambiance of dirt, old tires, and wheelbarrows, this is the place for you. Today there was live indie music of some kind, though the band was a bit hard to hear over the roar of afternoon drunkenness. My wife also enjoyed the plethora of puppies bounding about. 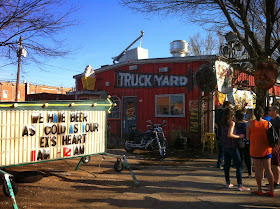 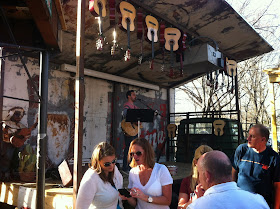 Tutta's has more on the menu than just run-of-the-mill pepperoni pizza. Most places that serve a bbq chicken pizza think simply adding sauce to some grilled chicken is sufficient, but not Tutta's. They present an interesting and innovative combination of barbecue and pizza that goes well beyond the norm.

This truck has several options for barbecue pizza available: pulled pork (The Smokey Pig), chopped chicken (The Hot Chick), and pulled brisket (The Texan). They all sounded great, but I'm more of an equal-opportunity carnivore. That's where The Durty Dough pizza comes into play. This awesome pie comes topped with smoked and pulled pork, chicken, and brisket, bacon, chopped Serrano peppers, a five-cheese blend, and Tutta's signature bbq sauce. 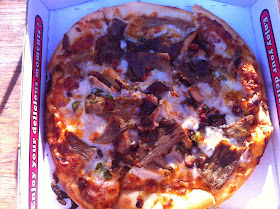 I unboxed my order, and was amazed at what I found: big chunks of actual smoked meat. The combination of flavors was great, as were the individual ingredients. The chicken had some good smoke, and was much more tender than I expected. I also found a really seasoning blend. The brisket had less smoke than the chicken, but was still very tasty. These were leaner cuts of brisket than I normally prefer, but the meatier pieces worked better on a pizza than fatty brisket would have. I couldn't pinpoint any smoke in the pulled pork, but it was very tender and had a decent flavor nonetheless.

Meat was certainly the highlight of this pizza, but the other ingredients played a significant role as well. The chopped Serrano peppers added just the right amount of heat without killing my taste buds, though a few bites did light me up a little bit. In addition to its obvious greatness, the bacon added a nice crunchy texture and some much-needed salt. The barbecue sauce was tasty and slightly sweet, but what I most enjoyed was the lack thereof. Most bbq pizzas end up drowning in sauce, but Tutta's correctly used it as more of an accent than a focal point. I also thoroughly enjoyed the perfectly-cooked crust: not too chewy, not too crisp.

Tutta's Pizza offered up a surprisingly flavorful twist on traditional barbecue. The inebriated crowds at the Truck Yard were a little difficult to navigate, but it was definitely worth it.